Dr. Caballeron is a male Earth pony who first appears as an antagonist in the season four episode Daring Don't. He also appears in the chapter book Daring Do and the Eternal Flower and the IDW comics. He is an enemy of Daring Do and a collaborator with fellow villain Ahuizotl.

Prior to The Hub Network's press release for Daring Don't, Dr. Caballeron's name was revealed in October 2013 via Michael Dobson's online resume.[2]

"Caballeron" is a surname derived from the Spanish word "caballero," meaning "horseman" or "gentleman"; in common usage it refers to a caretaker/rider of horses, and in aristocratic terms, it refers to a noble or knight. Its usage here may be a horse pun, or it may refer to his status as a scholar with a degree of the highest rank.

According to M. A. Larson, a scene in Slice of Life featuring Dr. Caballeron was planned but cut for time.[3]

Dr. Caballeron first appears in the episode Daring Don't during a scuffle between Daring Do and a group of stallions who work for him. When the thugs incapacitate Daring, Caballeron seizes a gold ring that the two sides were fighting over and smugly thanks Daring Do for finding the ring for him.

He reveals to Daring that he's working with Ahuizotl and intends to sell the ring to him, make a fortune, and retire in splendor. What Ahuizotl intends to do with the ring is apparently of little consequence to him.

In the forest, Dr. Caballeron and his henchponies encounter a disguised Daring Do who offers a large bag of bits for the ring. With Ahuizotl not present, Caballeron is eager to sell. When Ahuizotl angrily storms onto the scene, Caballeron makes off with the bits and leaves the ring behind.

Rainbow Dash states in the episode Dr. Caballeron made his debut in the book series' fourth entry, Daring Do and the Razor of Dreams. He is stated to have wanted to partner up with Daring Do on her adventures, but Daring Do refused.

In Stranger Than Fan Fiction, Dr. Caballeron and his henchponies pursue Daring Do to a Daring Do Convention in Manehattan, and he expresses displeasure at not being more popular with Daring Do fans. In order to claim an artifact that Daring recently found, he abducts Rainbow Dash and Quibble Pants to bait her into the open.

After his attempt to find a rare treasure ends in failure, Caballeron and his henchponies are chased off by a ferocious Cipactli.

In Daring Done?, Dr. Caballeron attempts to ruin Daring Do's reputation in the southern village of Somnambula so that he can make off with the village's collection of glowpaz and frame Daring Do for the act. He and his henchponies briefly capture Rainbow Dash as bait to lure Daring Do into a trap, but Daring, Rainbow, and Pinkie Pie eventually thwart his plan, exposing his deception in the process.

Caballeron is mentioned in The End in Friend; Rarity mispronounces his name with a Spanish affectation, and Rainbow Dash corrects her on the pronunciation.

In Daring Doubt, Dr. Caballeron becomes an author of Daring Do books under the pseudonym of "Groom Q. Q. Martingale" with the intent of publicly airing Daring Do's mistakes and secrets and telling his side of her stories. When Fluttershy sympathizes with Caballeron's plight, he manipulates her into joining his team's quest for the Truth Talisman of Tonatiuh. Over the course of their adventure, Caballeron comes to appreciate Fluttershy's kindness, and when he learns of Ahuizotl's true goals, he and Daring Do promise to stop pillaging artifacts from his lands. In the end, he becomes Daring's co-writing partner after discovering her real identity as A. K. Yearling, though their latest book is overshadowed by Ahuitzotl's own (to his annoyance).

Caballeron is mentioned by Juniper Montage in the half-hour special Movie Magic. He is also mentioned in the Summertime Short Leaping Off the Page by Rainbow Dash when she imagines herself living Daring Do's adventures while reading Daring Do and the Forbidden City of Clouds.

Dr. Caballeron is mentioned in Rainbow Dash and the Daring Do Double Dare and Daring Do and the Marked Thief of Marapore.

In Daring Do and the Eternal Flower, Dr. Caballeron briefly appears as a minor antagonist in chapter 2, "Daring Takes the Lead," and chapter 6, "To Catch a Leaf Thief." Much like his debut in Daring Don't, Caballeron steals a valuable item for Ahuizotl in exchange for a hefty sum of bits.

In Daring Do and the Forbidden City of Clouds, Dr. Caballeron is mentioned again, and Daring Do sees a statue that looks "exactly like Dr. Caballeron." The cover of the book appears to depict Dr. Caballeron himself, with more of a beard, at the location.

Dr. Caballeron is a character in Gameloft's mobile game.

DR. CABALLERON and his henchponies will do anything for money. Got something that needs selling? He'll do the job. Caballeron has a taste for ancient artifacts. Watch out for his entrancing accent—it's been known to get ponies in trouble.

In the Equestrian Odysseys expansion set of Enterplay's collectible card game, card #10 C names Dr. Caballeron with a trademark symbol and lists the quote "It's a cerberus-eat-cerberus world out there, so you have to do everything you can to get ahead."

"Many thanks, Daring Do. As you've probably surmised, our earlier search for this treasure was... unsuccessful. So kind of you to find it for us."
— Daring Don't

"I find all this fanfare around my archenemy... disturbing."
— Stranger Than Fan Fiction

"The Temple of Chicomoztoc is somewhere in this jungle. When I find it, the Seven-Sided Chest is as good as mine!"
— Stranger Than Fan Fiction

"What? No witty remarks this time about how silly my plan is?"
— Stranger Than Fan Fiction

"I'll get you, Daring Dooooo!"
— Stranger Than Fan Fiction

"Thank you for helping me break Daring Do's spirit by destroying her reputation, but I can't have you running off and telling her my plan."
— Daring Done?

"If my previous plan didn't cause you to give up, Daring Do, then the shame of losing your dear friend Rainbow Dash to the slime will! Oh, and that ancient magic from the legend is real. There'll be no flying in the pyramid! Good luck, Daring Do!"
— Daring Done?

"You know, my team could use an insightful Pegasus like you, Fluttershy. Have you ever thought of being... an adventurer?"
— Daring Doubt

"By the way, Daring, you really should consider wearing dresses more often. You look kind of...nice."
— Daring Do and the Eternal Flower

"It's a cerberus-eat-cerberus world out there, so you have to do everything you can to get ahead."
— Enterplay collectible card game Equestrian Odysseys card #10 C of Dr. Caballeron

"Ah, Daring Do, we meet again! This time I shall best you, just like the time with the crystal skull."
— Enterplay collectible card game Defenders of Equestria card #117 C of Dr. Caballeron 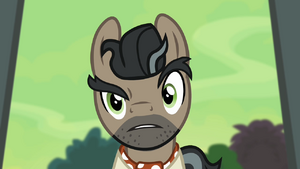