Start a Wiki
Biff, Rogue, Withers, Pickpocket, and Rosy Thorn are five ponies who appear as henchponies to Dr. Caballeron. The former three first appear in Daring Don't, "Pickpocket" first appears in Stranger Than Fan Fiction, and Rosy Thorn appears in chapter books. "Pickpocket" is unnamed in the series, his name being a placeholder name, but Biff, Rogue, and Withers are named in Daring Doubt, chapter books, and Tails of Equestria, and Biff and Rogue are also named in merchandise.

Biff, Rogue, and Withers first appear in the season four episode Daring Don't. They are first seen invading Daring Do's forest home and fighting her for the Ring of Destiny. When Rainbow Dash accidentally distracts Daring Do, the henchponies overpower her, and Dr. Caballeron seizes the Ring of Destiny from her.

When Caballeron and the henchponies are later approached by Daring Do in disguise, they prepare to sell the Ring of Destiny to her for a large amount of bits, but Ahuizotl arrives and scares them off.

Biff, Rogue, and Withers also appear in the season six episode Stranger Than Fan Fiction alongside "Pickpocket". They capture Rainbow Dash and Quibble Pants on multiple occasions, though the latter ensures their escape each time either by deceiving the crooks or setting off an ancient booby trap.

In season seven, Biff, Rogue, Withers, and Pickpocket appear in Daring Done? They once again capture Rainbow Dash and try to make off with Somnambula's collection of priceless glowpaz, but Daring Do, Rainbow Dash, and Pinkie Pie thwart their schemes.

In season nine, Biff, Rogue, and Withers appear in Daring Doubt accompanying Dr. Caballeron and Fluttershy to the Tenochtitlan Basin in search of the Truth Talisman of Tonatiuh. Like Caballeron, the henchponies are surprised and impressed by Fluttershy's kindness and ability to tame ferocious animals. Toward the end of the episode, Rogue quits his henchpony job to pursue his dream of being an opera singer.

In the chapter book Daring Do and the Eternal Flower, Outlaw (implied to be Biff but unidentified), Rogue, and Withers appear again as Dr. Caballeron's henchponies. They ambush Daring Do at a dinner party hosted by the Equestrian Botanical Society, but she eventually overcomes them. Later, she meets Caballeron's fourth henchpony: a freelance adventurer Pegasus named Rosy Thorn.

Rosy Thorn briefly teams up with Daring Do to rescue Daring's uncle Gallant True from Ahuizotl. However, she is later revealed to be one of Ahuizotl's partners, and she betrays Daring in order to get her to lead them to the Eternal Flower.

Withers appears again in Daring Do and the Forbidden City of Clouds. He breaks into A. B. Ravenhoof's house in search of information about Cirrostrata, an invisible city in the sky.

Withers, Rogue, and Biff appear in The Curse of the Statuettes.​[​specify​]​

In the Crystal Games expansion set of Enterplay's collectible card game, Biff is named on card #156 R, which attributes to him and Daring Do the respective quotes "Running away, Daring Do? What are you, chicken?" and "Nopony calls me chicken..." In the Defenders of Equestria expansion set, Rogue is named "Pow" on card #23 R, which includes the quote "I got yer back, Doc. Let's get back to base and you tell us our next move, yeah?"[1]

"Fan out! We can't let Daring Do rescue these two!"
— Pickpocket, Stranger Than Fan Fiction

"I'm supposed to be Dr. C's second-in-command. But he never listens to me."
— Biff, Daring Doubt

"That's it! I'm quitting the henchpony business to finally follow my dreams of becoming an opera star!"
— Rogue, Daring Doubt

"Well, not anymore! I was strapped for cash and he needed extra ponies. It was just a job! But I want to help you!"
— Rosy Thorn, Daring Do and the Eternal Flower

"I just thought it would be interesting to hear more about this thing that everypony wants so badly. Must be pretty special."
— Rosy Thorn, Daring Do and the Eternal Flower

"I told you she'd say that. Maybe I can convince them to help us. After all, we're old friends...."
— Rosy Thorn, Daring Do and the Eternal Flower

"If you're thinking about escaping—don't. You've seen me in action. I'm fast enough to catch you."
— Rosy Thorn, Daring Do and the Eternal Flower

"Achoo!"
— Withers, Daring Do and the Forbidden City of Clouds

"Dr. Caballeron wants to see you in his tent."
"Yeah, he's looking forward to meeting our unexpected guests."
"We'll take you there right away."
— Withers, Rogue, and Biff, The Curse of the Statuettes page 26

"Running away, Daring Do? What are you, chicken?"
— Biff, Enterplay collectible card game The Crystal Games card #156 R of Biff

"I got yer back, Doc. Let's get back to base and you tell us our next move, yeah?"
— Pow, Enterplay collectible card game Defenders of Equestria card #23 R of Pow 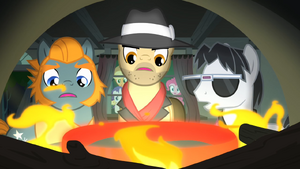 Retrieved from "https://mlp.fandom.com/wiki/Dr._Caballeron%27s_henchponies?oldid=2155804"
Community content is available under CC-BY-SA unless otherwise noted.