Not to be confused with Mane Allgood.

Dr. Fauna, also called Mane Goodall and Mane Cureall, is a female Earth pony veterinarian who first appears in the season two episode Secret of My Excess. She has a light yellow coat, two-tone blue mane and tail, brown eyes, and a cutie mark of a dog's head, cat's head, and white bird. She is named "Dr. Fauna" in the show and "Mane Goodall" and "Mane Cureall" in merchandise.

Dr. Fauna's merchandise-given name is a play on primatologist Jane Goodall, as is Mane Allgood’s. Ruby Redheart was also based on Jane Goodall.

Dr. Fauna first appears in Secret of My Excess; Twilight Sparkle brings Spike to her office when he starts exhibiting uncontrollable growth spurts. Dr. Fauna is unable to diagnose Spike because she treats normal animals like dogs and snakes, not dragons. She treats Spike like a dog and gives him a dog treat.

In Fluttershy Leans In, Dr. Fauna's animal clinic becomes crowded with animals, so Fluttershy establishes an animal sanctuary to both lighten her workload and provide a haven for animals to recuperate. Dr. Fauna also appears in Secrets and Pies during Pinkie Pie's investigation of Rainbow Dash. She informs Pinkie that she's been treating Tank for stomach aches (the result of Rainbow Dash feeding him some of the pies Pinkie gave her).

In The Beginning of the End - Part 2, Dr. Fauna is one of King Sombra's mind-controlled slaves until the Mane Six defeat him.

In She Talks to Angel, Dr. Fauna gives checkups to the animals at Fluttershy's animal sanctuary and helps Zecora with a smoke-breathing gecko she found in the Everfree Forest. When Fluttershy magically switches bodies with Angel, Dr. Fauna is forced to deal with Angel's complete disinterest in taking care of animals, and she helps nurse an exhausted Fluttershy back to health. At the end of the episode, she identifies Zecora's smoke-breathing gecko as a fire lizard.

In The Last Problem, Dr. Fauna briefly appears in Fluttershy's group shot during The Magic of Friendship Grows.

Dr. Fauna appears in My Little Pony: Friendship is Magic Issue #54 in her same role as in Fluttershy Leans In.

Dr. Fauna is a character in Gameloft's mobile game under the name "Mane Goodall", and serves as a boss battle helper during the "Rarity's Retro Revolution" event.

In Enterplay's collectible card game, Dr. Fauna is named Mane Goodall with a trademark symbol on her Gen Con Indy 2013 demo card, and she is named "Mane Cureall" on card α #89 R. Both cards list her quote "I've always had a good rapport with animals. Still don't know the first thing about dragons, though."

"Hm, well, I'm flummoxed. Y'bring me a dog, I've got it diagnosed in seconds. Snake even faster, but... to be honest, I've never seen a real live dragon before."
— Secret of My Excess

"I'm flummoxed! Every day, there's more and more animals on my doorstep. Most of them just have minor ailments – hurt wings, stuffy noses, and such. But the trouble is even after they're all healed up, I can't seem to get these comfy critters to leave!"
— Fluttershy Leans In

"About a week ago. Poor Tank had all the telltale signs of sugar overload – jittery shell, sleeplessness, reptilian indigestion."
— Secrets and Pies

"It might look like chaos, but Fluttershy makes it work, even with Angel running around."
— She Talks to Angel

" Fluttershy, I've said it before, but I'll say it again. This place would be a... zoo without you!"
— She Talks to Angel 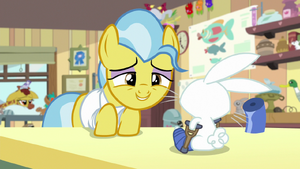