Not to be confused with Doctor Horse.

Dr. Horse, or Doc Top, is a male Earth pony pediatrician who first appears in the season two episode Secret of My Excess. He has a light brown coat, orange mane and tail, gold eyes, and a cutie mark of a stethoscope and varying first aid kit. He is named "Dr. Horse" in the show and "Doc Top" in merchandise.

Dr. Horse first appears in the season two episode Secret of My Excess; Twilight Sparkle brings Spike to his office when he starts exhibiting uncontrollable growth spurts. Dr. Horse fails to diagnose Spike because he treats baby ponies, not baby dragons, and he suggests that Twilight take Spike to a veterinarian.

In the season five episode The Cutie Re-Mark - Part 2, Dr. Horse appears as a resident of Zecora's secret camp in the Everfree Forest, hiding from the changelings. When Queen Chrysalis appears to attack the camp, Dr. Horse flees in terror when a filly next to him is revealed to be a changeling.

In season seven, Dr. Horse briefly appears in A Flurry of Emotions as a doctor at Ponyville Hospital. In A Health of Information, he diagnoses Zecora's Swamp Fever and later comes down with the disease himself.

In season nine, Dr. Horse briefly appears in Fluttershy's group shot during The Magic of Friendship Grows in The Last Problem.

In the Canterlot Nights expansion set of Enterplay's collectible card game, Doc Top is named on his card, #32 C, which attributes to him and Octavia the respective quotes "Aww, do you have a boo-boo? Who's the bwave wittle filly? Is it you?" and "... Perhaps it is time I finally found a new primary care physician."

"Well now, what seems to be the problem?"
— Secret of My Excess

"All right then, let's just have a look see, shall we? Widdle guy not feewing too good? Who's a brave widdle boy, huh? Who's a brave one?"
— Secret of My Excess

"Well, I think I know what the problem is. He's a dragon!"
— Secret of My Excess

"Oh. Well, that would explain it. Listen, I don't know anything about dragons, I know about baby ponies. Maybe you should try a vet."
— Secret of My Excess

"All right, Zecora. Let's have a listen to the old ticker."
— A Health of Information

"it's just as I thought. I'm afraid you have a very rare disease called... [echoing] Swamp Fever!"
— A Health of Information

"Please tell me you found the cure!"
— A Health of Information

"Aww, do you have a boo-boo? Who's the bwave wittle filly? Is it you?"
— Enterplay collectible card game Canterlot Nights #32 C card of Doc Top 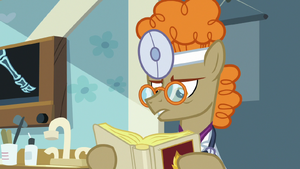