Dragon Dropped is the nineteenth episode of season nine of My Little Pony Friendship is Magic and the show's two hundred and fifteenth episode overall.[1] The title is a play on the computing expression "drag and drop".

In this episode, Rarity worries she's done something to upset Spike when he stops making time for her.

The preoccupied and distant

The episode begins at the Castle of Friendship, where Rarity enters Spike's room and asks him to accompany her to the gem cave as her basket holder/bodyguard. Spike barely pays any attention to Rarity, however, being preoccupied with writing and sending off a letter scroll. Before Rarity can ask him again, Spike notices what time it is and hurries out of the castle, explaining that he needs to get to the post office before noon, and Rarity is left at the castle by herself.

At the gem cave, Rarity confides in Applejack—who she chooses as a substitute basket holder—that Spike never passes up an opportunity to collect gems with her, and she questions Spike's need to visit the post office in the first place. When Rarity goes looking for Spike at the castle later, Twilight Sparkle says he has gone to the post office again. When Rarity wonders why Spike declined her invitation to the gem cave earlier, Twilight suggests the two of them had some sort of argument that hurt Spike's feelings. Though Rarity cannot remember doing so, she hopes that a simple apology will mend their differences.

Rarity pushes a giant crate of gifts for Spike to the post office as part of her grand apology to him, and she runs into Griffonstone mail delivery griffon Gabby. When Gabby mentions to her that Spike just recently stepped out, Rarity practices her overdramatic apology with Gabby as Spike's stand-in. As soon as Spike returns, Rarity delivers her apology and begs Spike's forgiveness for whatever she did to upset him, but Spike does not know what she is apologizing for.

Spike reveals that he declined Rarity's invitation to the gem cave because he already had plans to hang out with Gabby; the two had become pen pals after the events of The Fault in Our Cutie Marks. With Spike spending time with Gabby while she is in town, Rarity invites him to go fabric-shopping with her the next day, but Spike says because Gallus attends the School of Friendship, Gabby is in Ponyville much more often getting updates for Grampa Gruff. As Spike and Gabby fly off to hang out some more, Rarity is left by herself once again.

The next day, Rarity goes fabric-shopping with Rainbow Dash and uses Fluttershy as an assistant at her boutique, all the while expressing jealousy that Spike is spending all of his time with Gabby. She also comes to realize how invaluable his help is with her shopping and sewing and how much she enjoys his company. Fluttershy suggests that Rarity show Spike how grateful she is for everything he has done for her over the years.

Rarity visits Spike in the middle of the night and invites him to go with her to the Great Gem Crevasse of the Crystal Mountains, which is only accessible once a year, as a token of gratitude for everything he does for her. However, Spike says he has plans to meet Gabby for her mail delivery rounds the next morning. When Rarity looks disappointed and starts to leave, Spike changes his mind and writes a note to Gabby about his new plans.

When Rarity and Spike return from the Gem Crevasse the next day, they run into Gabby, who is excited to hear all about Spike's trip. The day after that, as Spike and Gabby continue to hang out together, Rarity appears with V.I.P. passes to "Power Ponypalooza", a Power Ponies convention. Though disappointed about not hanging out with Spike for two days in a row, Gabby encourages Spike to go to the convention with Rarity. By the end of the day, Spike is so tired from the convention that he decides to use all of the following day to rest.

The next day, Rarity shows up at the castle yet again. Though she and Spike are both still exhausted after Power Ponypalooza, she brings a copy of Ogres & Oubliettes so they can spend their day of rest together. When Gabby visits the castle a short while later with some soup for Spike, she finds him and Rarity playing Ogres & Oubliettes together, contrary to his note saying he was too tired to do anything. Believing that Spike does not want to hang out with her anymore, Gabby storms out in sorrow.

Later that day, Spike is back to being Rarity's shopping assistant and day companion, but he is so heartbroken over losing Gabby as a friend that he spends the entire time depressed. When they return to the castle, Twilight notices Spike's behavior, and Rarity admits to taking up all of Spike's time with trips, conventions, and games so that he has no time left to hang out with Gabby. Rarity regrettably confesses that she was so used to having Spike around that when he started spending all of his time with Gabby, she missed him dearly.

"Just because Spike made a new friend doesn't mean he stops being yours."
— Twilight Sparkle

Reluctant to get used to the idea of sharing Spike with someone else, Rarity resolves to fix the mess she made in Spike and Gabby's friendship. She meets Gabby at the post office and apologizes for deliberately taking up all of Spike's hangout time so that he would not get to hang out with her. When Spike unexpectedly appears, Rarity apologizes to him as well. Gabby, having taken a liking to Spike from their time spent together, sympathizes with Rarity's desire to spend as much time with him as possible, and she and Spike agree to start hanging out again.

As Spike and Gabby leave together, Rarity is happy that they reconciled. Some time later, she visits the gem cave again, this time with Pinkie Pie as her basket holder. She expresses Twilight's earlier sentiment that just because Spike is hanging out with a new friend does not mean he and Rarity are not friends anymore. Spike suddenly shows up with his own gem basket, saying he and Gabby had a great day together but he will always want time with Rarity.

Rarity: Honestly, Spike. It's almost as if you haven't been listening.
Spike: Oh, uh... of course I was. But just to be sure, could you say it all again?

Applejack: [gasps] Rarity, Spike's been followin' you closely since he got to Ponyville. And in case you hadn't noticed... [echoing] I AIN'T SPIKE!

Rarity: Well, if I didn't realize what I did, how would I know what I have done when I did it? [brays] I wonder if that's it. It certainly would explain his behavior. I must apologize!
Twilight Sparkle: For what?
Rarity: Oh, pfft. That's hardly the point.

Rarity: [overdramatically] Oh, Spike! I am so sorry! Please forgive me! You have to forgive me! I don't know what I did or why you're mad at me! Just please say you forgive me! [wailing] Pleeeeeeeease!
Spike: Of course I forgive you. But, uh, what are you apologizing for?
Rarity: Why does everypony keep harping on that—?! Wait. Don't you know?
Spike: No, I'm not mad at you about anything.
Rarity: B-But... But I don't understand. If you're not upset with me, why in Equestria would you refuse to go to the gem cave?
Spike: Uh, because I had other plans?
Gabby: With me!

Rarity: I don't understand. You two know each other?
Spike: Gabby and I are sort of pen pals.
Gabby: Yeah! There was this whole thing where I pretended to get a cutie mark because griffons don't get cutie marks, so Princess Twilight had Spike send a bunch of letters off to Griffonstone about the first griffon ever to get a cutie mark! Which I didn't really have.

Gabby: Spike?
Spike: Oh, hi, Gabby. We were just—
Gabby: Your scroll said you were too tired to do anything today. But I guess you were just too tired to do anything with me.
Spike: No-no-no-no! That's not true! I can come with you on your rounds right now!
Gabby: I don't think so, Spike. Maybe I'll just handle the rounds on my own from now on.
Rarity: Oooh! Princess Shmarity uses her Prismatic Beam to change that poor monster's color to a more pleasing shade of purple!

Rarity: Honestly, it took everything I had to convince him to spend any time with me at all! But between crystal gem crevasses, Power Pony conventions, and a marathon game of O&O, I managed to get some time in.
Twilight Sparkle: It sounds like you made sure he didn't have any time to spend with Gabby at all.
Rarity: What?! Pfft! I most certainly did not! Well, I... suppose I may have monopolized him a teeny bit.

Spike: Rarity? What are you doing?
Rarity: Well, obviously I'm apologizing to Gabby so the two of you can renew your friendship, Spike. Now please, even if you can't forgive me, you simply must forgive— [gasps] Spike?! Oh. I actually owe you an apology, too.
Gabby: You apologize a lot.

Gabby: I have to say, after not hanging out with you, I understand why. You're kinda awesome! And I know what it's like to miss that now, too.
Spike: So, do you think maybe we could start hanging out again?
Gabby: Absolutely.
Spike: I don't suppose you'd like some company on your rounds right now?
Gabby: I sure would!
Rarity: Wonderful! I can't tell you how pleased I am that the two of you have— [laughs] ...reconciled.

Spike: Yeah. Gabby and I had a great day, but I'll always still want my Rarity time. 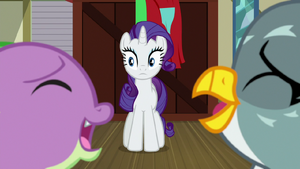