Dragon Quest is the twenty-first episode of the second season of My Little Pony Friendship is Magic and the forty-seventh episode overall. In this episode, Spike decides to join the Great Dragon Migration to discover his true identity.

The episode is similar to the G1 My Little Pony episode Spike's Search.

The dragons' disrespect towards ponies is a deliberate reflection of the common contempt towards little girls' toys, personified by the ponies.[2]

According to Jim Miller, the main characters learned Garble's name during the events of this episode.[3][4]

The episode begins with Applejack and Pinkie Pie rapidly digging a hole in the ground. Next, Rainbow Dash is shown dragging Fluttershy to the door of her cottage, with her and Twilight Sparkle urging her to go to the "once in a generation" dragon migration. Fluttershy is clearly afraid to go, drawing back to her fear of dragons in Dragonshy. Rainbow Dash says that Fluttershy owes her for the time she spent with her at the butterfly migration, but she resists by hanging on to her front door frame. Eventually losing her temper with a cry of "NO!!!", she steamrolls over Rainbow Dash with a hoof to the stomach, and gently opens one of her living room windows to exit through with a jump and runs off, much to Twilight's horror. Rainbow, still lying on the floor, decides to let her off the hook this time.

Twilight, Applejack, Pinkie Pie, and Rainbow Dash are then shown in the finished hole, which turns out to be a viewing trench behind some low-lying bushes, wearing camouflage to try and spot dragons. Rarity finally arrives, wearing a swanky pink, purple and gold camouflage naming herself the "toast of the trench", and arriving on a red carpet. They then spot the dragons flying above, and a few of them begin to fight with each other. One of them breathes fire in Rainbow Dash's direction, charring her coat. Spike is also present, and begins handing out snacks to his friends. But Rainbow Dash makes fun about how he isn't like the other dragons. Rarity rushes to back up Spike from Rainbow Dash's insults, but Spike still ends up storming off, upset.

Spike is up late at night wondering what he is and where he is from. Twilight can’t sleep over Spike talking and tells him she doesn’t know since he was given to her as an egg and she doesn’t know who found him or where. Spike says that doesn’t give him the answers he needs so Twilight suggests some late night research. Spike is surprised and Twilight is confident they will find something.

The next morning, neither Twilight nor Spike has found any information on dragons. Twilight says they are apparently too rare and scary for ponies to talk to or study. Spike wonders if dragons cry and Twilight wipes his face, as he starts to cry. Spike pushes her tissue away and says he will discover who he is if it is that last thing he does. Rainbow Dash and Rarity come in and invite Spike and Twilight to breakfast. Twilight agrees but Spike opts out and says he wants to get an early start. Rarity asks him what he means and Spike says he is going on a quest of self-discovery to learn what it means to be a dragon. Spike says that only way to do that is to join the Dragon Migration. Twilight, Rainbow and Rarity are shocked at this. As Spike sets off, they mutter to each other that they will follow him.

Spike sets out on his journey, which takes him across mountains, rivers and forests. Finally, he arrives in the volcanic area that the dragons have migrated to. Spike notices a group of teenage dragons and runs down to them. Unfortunately, he is almost immediately berated by the other dragons, who make fun of his small size and lack of wings. They also accuse him of being "part pony", or a "pony in a dragon costume"; which is ironic, seeing as Rarity, Twilight, and Rainbow Dash are nearby in a dragon costume, having followed Spike to the crater.

Spike is challenged to a series of games. The first challenge is a burping contest, which Spike performs poorly in due to only being able to come up with a small burst of magical fire, from which a scroll from Princess Celestia appears. The scroll is tossed into a lava pool by one of the dragons. The next challenge is a tail-wresting competition. Spike first wrestles with the three ponies dressed up as a dragon, and he struggles at this even when the three ponies are not putting up any fight. The costumed ponies collapse on purpose though, to make it look as if Spike won. However, Spike is then put up against a dragon with a giant tail, who catapults him into the side of the crater. The third challenge is dubbed "king of the hoard", a play on the game "king of the hill". Spike sneakily climbs up the hill of gems, and softly nudges off the dragon on top. While celebrating, Spike loses his balance and falls down the mound of gems. The final challenge is to find out who could make the largest splash by cannonballing into a pool of lava. Although nervous about the dizzying height, Spike screws up his courage and jumps off the ledge, but lands face down in a painful belly flop and slowly sinks into the lava as the teenagers wince.

Spike assumes he did poorly. However, one of the teenage dragons, Garble, astounded by Spike's ability to withstand the fall, announces that Spike will be crowned as a dragon, and after being given a noogie in the initiation ceremony, is initiated as a dragon. The dragons then hold a party in which they gorge themselves on gems, after which Spike mentions that he doesn't want to leave the group.

The group of dragons then decide to go on a phoenix egg raid. Spike reluctantly agrees to go, and after saying that he'll just wait behind as he can't fly, is picked up by another dragon and flown to the nest. The dragons observe the two adult phoenixes, and tell Spike to lure them away. Spike pelts the nest with a rock, which prompts the phoenixes to fly after him, leaving their eggs unguarded. When the other dragons move in to steal the eggs, they find that they have hatched into baby phoenixes. The baby phoenixes fly around and disorientate the dragons, and then call for help from their parents. The parents fly back to help their babies, and successfully evade the pursuing dragons using magic.

By the time they return to Spike, they find he has found an unhatched phoenix egg. They egg on Spike to smash the egg on the ground, but he refuses to do so. At this point, Twilight, Rarity and Rainbow Dash show up, and doff their dragon costume. They assert themselves towards the dragons, only to make them laugh. The four then decide to simply run away, and Twilight teleports them away as the dragons gain on them, causing them to crash into a tree. After this, Spike tells the three ponies that they are more than just his friends, they are his family too, and they share a group hug.

Once back in Ponyville, Spike begins writing a letter to Princess Celestia. In this letter, he says that he has learned that "who I am is not the same as what I am". He says that although he was born a dragon, his pony friends have taught him how to be "kind, loyal and true", and that he is proud to call them his family. Then, the phoenix egg, which Spike kept, suddenly hatches, and Spike names the baby phoenix Peewee.

Rarity: What do you think? Am I the toast of the trench or what?
Applejack: [hushed] You'll be toast alright, when the dragons see you parading around in that getup.
Twilight Sparkle: [hushed] You look very nice, Rarity, but could you maybe look nice down here in the trench with us?
Rarity: Nice is an understatement. I look fabulous! Who says camouflage has to be drab?

Rainbow Dash: Pfft, pretty lame move. Is that all they've got?
[dragon roaring]
Applejack: [hushed] What do ya think of that 'move', Rainbow Dash? Still think they're lame?
Rainbow Dash: [hushed] Uh, not so much. The word 'fierce' comes to mind.

Rarity: Yes. You've got something those dreadfully fierce dragons can only dream of.
Spike: [excited] What's that?
Rarity: The cutest wittle chubby cheeks!

Rarity: Oh, isn't he adorable when he waddles off in anger?
Spike: Waddle?! Rrrrrggggh!

Spike: Count me out. I've gotta get an early start!
Rarity: An early start?
Spike: Yes! I'm going on a quest of self-discovery! I'm going to learn what it means to be a dragon! And the only way I'm gonna do that is to join the Dragon Migration!
Twilight Sparkle, Rarity and Rainbow Dash: What?!?

Garble: Who's this weirdo?
Purple teenage dragon: I think he's Crackle's cousin.
Crackle: [vocalizes]
Garble: Oh! That would explain it.

Teenage dragons: [having witnessed Spike belly-flopping into a pool of lava] Oooh...

Rainbow Dash: Nopony's gonna lay a claw on him!
Twilight Sparkle: That's right!
Rarity: Fighting's not really my thing, I'm more into fashion, but I'll rip you to pieces if you touch one scale on his cute little head!
[dragons laughing]
Garble: Spike, are these namby-pamby ponies your friends?
Spike: Yes, they are. And they're better friends than you could ever be. Now, if you don't back off, you'll see what us ponies do when confronted by a huge group of jerky dragons.
Garble: Oh yeah? [snorts] What's that?
Spike: Run away!

Spike: Phew, that was a close one. Thanks you guys.
Twilight Sparkle: Of course. What are friends for?
Spike: You're more than friends. You're my family.
Rarity: [squeaks]

Spike: Hey, welcome to the family, Peewee! Stick with me. I've got plenty to teach you about being a pony. 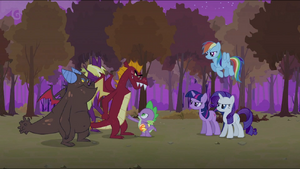