Applejack and Pinkie, digging a trench.

... and Fluttershy's cottage happens to be nearby.

"But I don't wanna go! There's scary dragons out there..."

She's about to make a getaway!

"Come on Fluttershy, do you really want to miss out on a chance like this?"

I refuse to go!

For a frail pony, she sure is steadfast stuck to the door frame.

There must be a very good reason why Fluttershy cannot be encouraged into watching the dragons.

"I watched that boring butterfly migration with you."

"So now it's your turn to watch the dragon migration with me!"

When some fool tries to pull rank, be sure to kick flank!

... And Rainbow Dash gets defeated by Fluttershy.

Ready to break through the window!

Ready to escape through the open window.

Rainbow Dash knocked for a loop

Out-raced by the nerd. Out-fought by the doormat. Just feed me to the dragons, will ya?
Add a photo to this gallery

An egghead with magnified eyes!

Applejack looking through the binoculars

The confetti carpet: For when you really want to make an entrance

Rarity's entrance is a fine example of Pomp & Circumstance.

Twilight looks a little freaked out.

"You look very nice, Rarity, but could you please look nice down here in the trench with the rest of us?"

"Nice is an understatement!"

"Who said camouflage has to be drab."

That's a lot of dragons.

We are both amazed!

"Pfft, pretty lame move. Is that all they've got?"

Rainbow Dash getting burnt by a dragon.

"Still think they're so lame?"

Have a cupcake on the house, Pinkie.

"Yep, we dragons sure are a force to be reckoned with."

Spike, handing out sweets to the ponies.

"One tough stain for one lame dragon..."

"You leave him alone, Rainbow Dash!"

"You've got something those dreadfully fierce dragons can only dream of."

Then he waddled away (waddle waddle)...﻿

"I hate to see him go, but I love to watch him leave."
Add a photo to this gallery

The mystery of Spike's history

Spike talking to himself about who is he and where he's from.

Come on Twilight, I just wanna know who I am.

That doesn't tell me anything about who I am!

When will my reflection show who I am inside?

I feel like I'm looking at a complete stranger!

Why don't we do some late-night research?

It's not like being sleep-deprived has ever had negative consequences before!

"This is getting ridiculous!"

"It's hard to believe, but ponies know next to nothing about dragons."

I wonder if Dragons cry.

Here Spike, wipe those tears away.

No Twilight, I must find the answer!

"Yeah, I need to get an early start if I'm going to join the Great Dragon Migration!"

Have sandvich, will travel!

How did that get there!?

"All I'm saying is that you could get hurt!"

"...hurt one little scale on your cutsey-wutsey head!"

"Stop him before it's too late!"

Hmmm. Are Spike and Rainbow having a tug-o-war?

"I still say you're nutty, but hey, I've done lots of nutty things."

We should let Spike do what he wants.

There goes a confident little dragon.

I wonder if he knows we put a tracking chip on him...
Add a photo to this gallery

...nor rain can stop this young dragon in his tracks.

Surprisingly, not a dragon-sicle yet!

Who needs walking? I gotta sheep!

What is Cranky doing with Spike?

How long did Spike travel?

Little-known fact: In a past life, Spike was a professional hobo.

A group of teenage dragons playing together.

He would fly away, that is if he has any wings.

Or maybe you're a pony in a dragon costume.

What a belch he's had!

But let's see how Spike does it.

Oh, what we got here? A letter from Princess Celestia.

"Ha! Get this, guys! Spike's pen-pals with a namby-pamby pony princess!"

Let's just throw this letter away!

Oh, you gonna pay for this!

"How can he just throw that away!?"

"You can't worry about that now Twilight."

Talk about having something in your face.

What was that Twilight?

That dragon has six eyes.

Crackle, the odd dragon who bears a strange resemblance to the ponies' costume

King of the Horde!

What's wrong Spike? You afraid the lava will hurt your soft pony hide?

Spike walking down the hall of dragon tails.

Did those derps seriously just knight a dragon? *Sigh* teenagers...

"To stay with these awful dragons."

"When I had the chance!"

"And you're ruining my fabulous costume!"

"We'll just have to hoof it!"
Add a photo to this gallery

The majestic phoenix is known to stare at its mate for hours on end, right?

I think of the birds from Rio for some reason...

Phoenixes learn to mess with others from a young age

An egg with a hot rod paint job.

You stole an egg?

If you don't back off, you'll see what us ponies do when confronted by a huge group of jerky dragons!

Spike with his true family.
Add a photo to this gallery

Spike is writing a letter to Celestia. 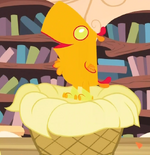 I shall call you, "Peewee"!

Peewee is best pet.
Add a photo to this gallery 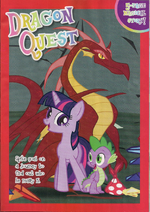 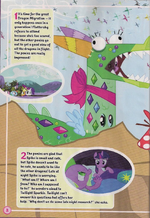 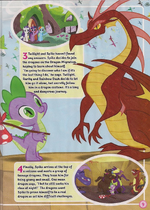 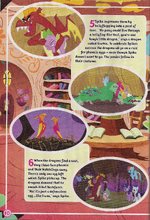 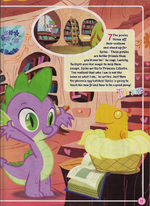 Add a photo to this gallery
Retrieved from "https://mlp.fandom.com/wiki/Dragon_Quest/Gallery?oldid=2191026"
Community content is available under CC-BY-SA unless otherwise noted.