Start a Wiki
A variety of large lizard-like dragons is featured in the show. One of them, Spike, is one of the main characters in the series. A prominent dragon-like creature, Steven Magnet, is referred to as a sea serpent, and there is another dragon-like creature referred to as a hydra. The other dragons resemble classical European dragons, with large bodies, long necks and tails, scales, and bat-like wings.

Spike is a baby dragon and one of the main characters of the show. He is Twilight Sparkle's assistant. He describes several of his traits in different episodes, among them being fire-proof, having tough scales that allow him to be pin-pricked without feeling pain (although he reacts when his tail is stepped on), and magically sending scrolls and other items by burning them with his fire breath. In Dragon Quest, it is shown that even at his age, lava is harmless to him and he swims in it as readily as ponies do in water.

Spike hatched from an egg, and even though he walks and speaks fairly maturely, he's still called a "baby" dragon. He is much smaller than the other dragons, and even smaller than ordinary ponies; in The Cutie Mark Chronicles, he is briefly transformed by Twilight's magic, making his body grow much larger than normal and his head bursts out of the ceiling of a tall spire.

Spike's love for eating gems is shown in several episodes. In The Ticket Master, he goes to a café with Twilight and asks if they serve rubies, but settles for hay fries. Rarity takes him along for her gem hunt in A Dog and Pony Show with the promise of letting him have some of the gems she finds. When he comes across buffalo in Over a Barrel, they show him great respect and feed him turquoises. In Owl's Well That Ends Well, he enters a cave full of gems and eats his fill. Pinkie Pie forces a false confession out of him in Party of One by offering him a plate of gems and applying some duress on him. In the episode Just for Sidekicks, Spike offers to watch the Mane Six's pets as long as he gets rewarded with gems for his gem cake. However, he eats all the gems before he can make the cake. Later in the series, other dragons like Ember are also seen eating gems.

Spike magically matures through his greediness in Secret of My Excess. He begins soliciting gifts from ponies for his birthday, which results in him growing into a gangly "teenager" by the next day. Twilight takes him to a doctor and then a vet, but both fail to diagnose him because they have no experience with dragons. She then takes him to Zecora who explains that his greed is making him grow up. Throughout the episode he grows larger, and develops more lizard-like qualities, like slit pupils and a long thin-forked tongue. Unlike the majority of other dragons in the show, he does not possess wings.

In the episode Princess Spike, Spike is shown to be highly allergic to dragon sneeze flowers. In the presence of these flowers, his eyes become red, bloodshot, and puffy, and he sneezes uncontrollably. This allergic reaction causes Spike to unintentionally destroy a gemstone statue that was to be part of a ceremony for the Grand Equestria Pony Summit.

In the episode Molt Down, Smolder explains to Spike that all dragons go through the "molt" when they reach adolescence as a natural part of their development. Symptoms of the molt include painful stone scales, uncontrollable volume shifts, fire burps, and a strong smell that attracts predators. Smolder also mentions that most molting dragons are forced to leave their home as a result of the "molt effect". After undergoing the molt, Spike grows a pair of wings.

Outside of Spike, dragons make several appearances in the series and in other My Little Pony media.

The threat in Dragonshy is created by an adult red dragon, Razer, who takes a nap in a cave at the top of a mountain, emitting a large cloud of thick, black smoke that threatens to engulf Ponyville. The ponies are given the task of asking him to relocate, which they successfully accomplish thanks to Fluttershy. At first the other ponies try different approaches, from persuasion to violence, but eventually Fluttershy scolds the dragon into submission. The red dragon has a large hoard of gold, gems, and other valuables which he uses as bedding. A green dragon, "Gostir", is featured in Owl's Well That Ends Well, living in a cave within the Everfree Forest. Spike enters the dragon's cave and eats some of its hoard of gold and gems. Soon after, the dragon finds him, questions his doings, and attacks him. The dragon has extendable claws and tail spikes, wings, and fire breath that slightly singes Spike, despite Spike stating in Griffon the Brush Off that dragons are fire-proof. Twilight Sparkle and Owlowiscious come to Spike's rescue, and the dragon chases them through the forest, but eventually gives up on his pursuit.

Both the red and the green dragon designs are reused in the episode Dragon Quest, appearing briefly during the Dragon Migration, as well as two other dragons, one with a white body and green scales, and another with a black body and purple scales. The episode prominently features a number of dragons Spike refers to as "teenage dragons"; they are not as tall as the grown dragons previously seen in the show, but taller than Spike. Unlike the adult dragons seen in the background, they vary wildly in appearance regarding their color schemes, the length and shape of tails, the shape of their mouths, and the presence and shape of horns, fins, and hair. All but one of them, "Whip", have wings, and most walk on two legs.

Among the dragons introduced in this episode are Garble, the red teenage dragon; Crackle, a dragon that looks similar to the costume used by Twilight, Rarity, and Rainbow Dash; Fume, the thinner purple dragon, voiced by Matt Hill;[1] the brown dragon, "Clump", voiced by Richard Ian Cox; Charcoal; and Backdraft.

In Magical Mystery Cure, the adult red dragon appears in one of Fluttershy's flashbacks.

A dragon statue appears in Twilight's flashback in Princess Twilight Sparkle - Part 2 and in the present in Castle Mane-ia.

In Do Princesses Dream of Magic Sheep?, the red dragon from Dragonshy appears in Pinkie Pie's dream as Pinkie jumps from background to background. A dragon costume is worn by Cherry Berry for Nightmare Night in Scare Master.

Multiple dragons appear in Gauntlet of Fire, most of whom either take part in the titular Gauntlet of Fire competition for the title of Dragon Lord or serve as obstacles in the race itself. Among the dragons featured include Dragon Lord Torch, his daughter Princess Ember, Maar, Scalio, Cinders, and Caldera. Garble and several dragons from Dragon Quest also reappear.

At the end of the episode, Ember is crowned the new Dragon Lord.

Dragons appear in Celestial Advice (as part of Twilight's hypothetical scenario of sending Starlight Glimmer to spread friendship in the Dragon Lands) and Ember appears in Triple Threat. Torch and another dragon appear in Campfire Tales. In Shadow Play - Part 1, several dragons appear in the Dragon Lands participating in the sport of gorge surfing, including Garble, who uses Flash Magnus' shield as a surfboard.

In School Daze - Part 1, a dragon named Smolder enrolls as a student at the School of Friendship. In The Hearth's Warming Club, Smolder tells of a Dragon Lands holiday tradition called the Feast of Fire, in which dragons gather to tell stories and the dragon who tells the best story wins a pile of gemstones. She also tells a story of how a homeless dragon named Scales overthrew the Dragon Lord and took over the Dragon Lands. In Father Knows Beast, a dragon named Sludge crash-lands in Ponyville and pretends to be Spike's father in order to live a life of luxury in Twilight's castle.

In Uprooted, dragons appear in the Dragon Lands observing Smolder win an arm-wrestling contest. In Sweet and Smoky, Fluttershy, Spike, and Smolder travel to the Dragon Lands and solve a crisis revolving around the dragon eggs, making them hatch with the help of Garble and Ember. In Between Dark and Dawn, Garble, Ember, and two other dragons appear during the song Lotta Little Things.

In The Ending of the End - Part 2, several dragons appear in the Dragon Lands as Smolder urges them to aid the ponies against Queen Chrysalis, Lord Tirek, and Cozy Glow. A number of them later appear alongside various ponies and other creatures in battle against the three villains. In The Last Problem, a number of dragons attend Twilight Sparkle's coronation and several are also seen in future Equestria.

In A Royal Problem's locked script, the mayor of Baltimare mentions that Baltimare is where Flash Prance "staged his final resistance against the dragon horde".

A dragon is mentioned in The Journal of the Two Sisters.

A dragon named Knuckerbocker appears in the chapter book Daring Do and the Eternal Flower.

Dragons are featured in The Dragons on Dazzle Island. The book depicts ponies hugging dragon eggs to make them hatch.

In Princess Luna and the Festival of the Winter Moon, it is mentioned that Princess Luna discovered a number of dragons living in Equestrian mountains and helped resolve a conflict between them and the neighboring bat ponies. Several mountain dragons also attend the titular festival.

In Trixie and the Razzle-Dazzle Ruse, Trixie performs a magic trick that involves making a dragon cry laughter-induced tears, an incredibly hot and dangerous substance, and a red dragon briefly appears summoned by Trixie's dragon whistle.

In Beyond Equestria: Fluttershy Balances the Scales, an underwater breed of dragons known as sand dragons are introduced.

Razer appears in episode 2 of Fundamentals of Magic, "Magical Creatures".

The adult red dragon is shown in the Discover the Difference game. It appears in the Dragonshy image.

The adult red dragon is shown in the Ruckus Reader interactive storybook Things That Go Bump in the Night. It appears in Fluttershy's imagination, which reuses a screenshot from Dragonshy. She refers to it as a "mean dragon".

In the European magazines, the dragons have their own festival called the Dragon Festival.

A purple dragon is shown in the 8 bit promo. It appears in Level 2 of Adventure Ponies! The Video Game, knocking apples from a tree. Pinkie Pie calls it a "meanie-pants" and, playing as Applejack, bucks it with an "Applejack smack".

A poster which features an official map of Equestria was released on August 3, 2012.[3] An arrow at the bottom claims "Dragons Be Here", indicating they live across the sea and to the south of Equestria (This is also a reference to old maps saying "Here Be Dragons" about uncharted seas).

WeLoveFine carries T-shirts of My Little Pony dragons. Three shirt designs are of Crackle: the first shows just Crackle, with the caption "BEST DRAGON"; the second is modeled after Crackle's gem-encrusted hide; the third shows Crackle atop a hoard of gems and wearing the Element of Magic tiara, with the word "SWAG" in the background. A formerly available shirt design depicting a host of non-Hasbro characters shows two dragons connected by the same body; Samantha Bragg, the artist of this design, refers to the conjoined dragons as "Juneau and Venus" and gives them a brief description in a post on DeviantArt.[note 1]

DRAGONS are mystical, flying lizard beasts that come in many different sizes, shapes, and colors. They have magical fire breath and spend their time munching on gems when they're not looking for a nice cave to take a nap in. While younger Dragons like Spike are sweet, others can be temperamental. Some are downright evil, like DRAGON LORD TORCH. He's the father of PRINCESS EMBER, who now serves as a kinder, gentler Dragon Lord. 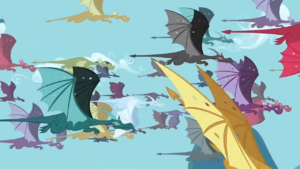 Retrieved from "https://mlp.fandom.com/wiki/Dragons?oldid=2156935"
Community content is available under CC-BY-SA unless otherwise noted.