Dragonshy is the seventh episode of the first season of My Little Pony Friendship is Magic. In this episode, a sleeping dragon's smoke disrupts the skies of Equestria and the Mane Six are tasked by Princess Celestia to convince it to leave, much to Fluttershy's displeasure. The episode's title is a portmanteau of Dragon and Fluttershy.

This is the first episode to use a bland credit font in the closing credits, as opposed to a fancier font in earlier episodes.

On September 21, 2015, an unauthorized leak of the show's Flash assets revealed an early treatment of this episode. In addition to referring to Princess Celestia as a Queen, the treatment had Fluttershy defeat the dragon using the Stare, making it the first episode to highlight the ability rather than Stare Master. The treatment also revealed a more violent confrontation between the ponies and the dragon, where the dragon throws the ponies save Fluttershy off the mountain and knocks them unconscious, rather than knocking them to the ground. Besides these changes, no major plot changes were made.[2]

A small part showing Pinkie in her wacky costumes reappears in Cakes for the Memories.

The episode opens with Fluttershy giving food to some of the animals that live around her home. Fluttershy flies over to Angel, who is rapidly eating a carrot, and tells him to slow down or else he'll get a tummy ache. Angel drops the carrot and runs off. Fluttershy catches up to him and attempts to convince him to eat more, but Angel refuses and kicks the carrot away. He runs a short distance and begins to cough, and after several failed guesses from Fluttershy, he points out the cause: an ominous cloud of black smoke heading towards Ponyville. Believing the smoke may be emerging from a possible fire, Fluttershy rushes over to warn everyone but fails to get their attention due to her soft voice and lack of assertiveness, and because the ponies in town are too occupied with their activities: Rainbow Dash trying to break a ball-bouncing record, Pinkie Pie organizing a celebration for when said record is broken, and other ponies conversing amongst themselves. Only when Twilight arrives are the other ponies alerted to the smoke.

Preparing for the journey

The main characters gather inside Golden Oak Library, where Twilight relays news from Princess Celestia: The smoke in question is not coming from a fire, but from a sleeping dragon. Celestia warns that if the dragon is not convinced to leave, the smoke from his snoring could easily blanket Equestria for the next hundred years. Twilight and her friends are tasked with taking care of the problem.

There's a short montage where Twilight's friends prepare for their journey, which is heavily influenced by 1970s and '80s action television shows and films. Rainbow Dash stripes a red, white and green pattern onto her cheeks, Applejack packs money and apples, Pinkie Pie has sunglasses and balloons exploding from her bag (she giggles then says "I mean GRRRRRRRRR"), Rarity puts on a big hat with khaki coloring and Fluttershy comes out of her house wearing a football helmet, water wings and various other sports equipment, then jumps when the door closes. The group rendezvouses near the mountain the dragon has occupied. Fluttershy, who has exhibited very little enthusiasm for going after the dragon, tries to back out of the mission, and Rainbow Dash concurs, pointing out Fluttershy's timidness and worrying that she might slow them down, something she does repeatedly throughout the episode. However, Twilight Sparkle insists that the Pegasus' talent of interacting with wild animals could be useful. Spike remains behind to look over the critters that Fluttershy usually takes care of, over her objections.

Initially, Rainbow Dash's skepticism seems justified. Upon hearing the dragon's distant snoring, Fluttershy's limbs lock up, rendering her unable to fly. Another snore makes her stiffly fall to the side, accompanied by a goat bleat, alluding to the tendency of some breeds of goat to stiffen after being startled. Applejack is forced to drag her the long way around to catch up to the other ponies. Later, after her ability to move on her own has returned, she still has trouble leaping over a narrow chasm, having to be encouraged by one of Pinkie Pie's songs; and a leaf falling on her back makes her cry out, inadvertently causing a rock slide that almost buries them and further extends their journey.

They do eventually reach their destination: the cave where the dragon is resting. Twilight wants to go in with Fluttershy, in the hope that between the two of them, they can convince the dragon to leave. But Fluttershy says she is scared of fully-grown dragons. After a failed attempt to cheer Fluttershy on, her friends decide to finish the job without her.

Twilight tries to reason with the dragon, but is completely ignored. Then, Rarity tries to use her charm on it, but fails when she tries to lay claim to the dragon's jewels. Pinkie Pie enters the dragon's cave in a funny costume with balloons, flippers, giant glasses, and a party blower, but exits without success. Her costume is similar to Daffy Duck's body in a scene from the Looney Tunes cartoon Duck Amuck. All Rainbow Dash's brute force attempt accomplishes is making the dragon angry: it steps outside the cave and begins attacking the ponies. In the process, the ponies get knocked over, and Fluttershy's hiding place is destroyed, exposing her to the dragon.

Looking at her dazed friends, she gains enough courage to fly up to the dragon and admonish him for what she calls his bullying. Cowed by Fluttershy's tone, the dragon tries to justify his anger by explaining that Rainbow Dash kicked him. Much to Rainbow Dash's confusion, Fluttershy apologizes for Dash's attack on the dragon, but also says that the dragon is bigger than the ponies and should be more considerate. She also admonishes him for sleeping in a place where his snoring could endanger the health of other creatures. The dragon weakly attempts to argue back, but Fluttershy won't let him. After being scolded so harshly that he bursts into tears, Fluttershy comforts him and convinces him to leave. The dragon leaves the mountain, and Fluttershy's friends congratulate her for standing up to him.

The episode cuts to Ponyville, where Spike is struggling to keep Angel in check. Twilight Sparkle relays a message to Princess Celestia that the mission was a success, and that she learned to never lose faith in her friends. Outside the library the main characters watch Rainbow Dash once again trying to beat the ball-bouncing record. Pinkie plays a prank on her and imitates a dragon's roar, which makes Rainbow briefly lock up in fear in a similar way to Fluttershy earlier in the episode. Still, the two Pegasi's roles are not entirely reversed; when Rainbow Dash blows another stray leaf onto Fluttershy's back, she freezes up and faints. The episode ends with the main characters laughing at the frozen Fluttershy.

Fluttershy: Are you okay? Are you coughing because there's a carrot stuck in your throat? Because you need some water?
Angel: [coughing]
Fluttershy: Because of the giant cloud of scary black smoke? [Fluttershy is struck by Angel's carrot] I'll take that as a... Yes.

Twilight Sparkle: According to Princess Celestia, he's taking a nap. His snoring is what's causing all this smoke.
Pinkie Pie: He should really see a doctor. That doesn't sound healthy at all.

Pinkie Pie: (imitating a dragon) Welcome to my cave, Rarity. Care for a diamond? [roar]

Rarity: I was this close to getting that diamond...
Twilight Sparkle: You mean getting rid of that dragon?
Rarity: Oh. Yeah. Sure.

Rarity: Darling, you look ridiculous.
Pinkie Pie: Exactly! Sharing a laugh is a sure-fire way to get someone on your side.

Rainbow Dash: All right, that's it. We tried persuasion, charm, whatever it is Pinkie Pie does.
Pinkie Pie: [busted horn]
Rainbow Dash: It's time to stop wasting time! I'm going in!

Fluttershy: How dare you... How dare you! Listen here, mister! Just because you're big, doesn't mean you get to be a bully! You may have huge teeth, and sharp scales, and snore smoke, and breathe fire... But you do not, I repeat, you do not! Hurt! My! Friends! ...You got that? Well...?
Razer: ...But, that rainbow one kicked me...
Fluttershy: And I am very sorry about that.
Fluttershy: But you're bigger than she is and you should know better. You should also know better than to take a nap when your snoring can become a health hazard to other creatures.
Razer: But I?
Fluttershy: Don't you but I me mister. Now what do you have to say for yourself? I said, what do you have to say for yourself?
Razer: [whimper] [crying]
Fluttershy: There, there. No need to cry. You're not a bad dragon, you just made a bad decision. Now go pack your things. You just need to find a new place to sleep. That's all.

Rainbow Dash: Pinkie Pie! You scared me! I mean... uh... You... broke my concentration.
Fluttershy: It's okay, Rainbow Dash. Not every pony can be as brave as me. 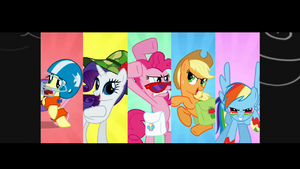