Drizzle is the placeholder name of a female background Pegasus pony with a pale purple coat, sandy yellow mane and tail, pink eyes, and a cutie mark of three purple umbrellas. She has a brief speaking role in The Ticket Master.

Her flower accessory is the same as the cutie mark of S05E19 Unnamed Unicorn Mare #1.

Drizzle first appears in Friendship is Magic, part 2 running away from Nightmare Moon as she makes her escape from Ponyville Town Hall. In The Ticket Master, upon learning that Twilight Sparkle has an extra ticket to the Grand Galloping Gala, Drizzle asks "What ticket? What Gala?"

In The Best Night Ever, Drizzle appears as part of the singing choir during At the Gala.

In My Little Pony/Transformers Issue #2, Drizzle appears on page 19 in the audience of Pinkie Pie's baking show.

"Wait, what ticket? What gala?"
— The Ticket Master 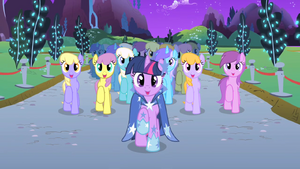