Eiffel is the placeholder name of a male Earth pony with a dark blue coat, light blue mane and tail, blue eyes, and a cutie mark either of two bongo drums, of a scroll, of an airstream cutting through two clouds, of two objects which are identified indirectly by Little, Brown's Mini Pony Collector's Guide and Gameloft's mobile game respectively as candies and as bows, of a strawberry and a bunch of green grapes, or of a guitar.

Eiffel appears in multiple episodes throughout the series, always shown diagonally from behind and usually in crowd shots of background ponies. In season one, he appears at the Summer Sun Celebration in Friendship is Magic, part 1, at Applejack's appreciation parade in Applebuck Season, at Trixie's magic show in Boast Busters, outside Ponyville Town Hall in Winter Wrap Up, in the talent show audience in The Show Stoppers, and in Twilight Sparkle's flashback in The Cutie Mark Chronicles.

In season three, Eiffel appears next to Cherry Berry at the Crystal Faire in The Crystal Empire - Part 1 and in a crowd of ponies outside town hall in Magic Duel.

In season seven, Eiffel appears with a guitar cutie mark in Honest Apple.

Eiffel appears in the outro of Adventures in Ponyville.

Eiffel appears in the Target Canterlot Twilight Sparkle Animated Storyteller's fourth storybook Applebuck Season, an adaptation of the episode of the same name. 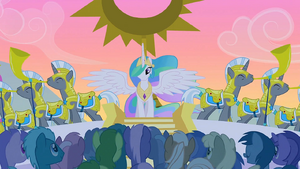