Electric Sky is a female background unicorn pony who first appears in the season five episode The Cutie Re-Mark - Part 1. She has a light yellow coat, two-tone blue mane and tail, blue eyes, and a cutie mark of three light bulbs. She first appeared in merchandise.

Electric Sky, as well as Magnet Bolt, Cherry Spices, "Rivet", and Barber Groomsby, was to appear in Boast Busters.[1]

In the season six episode No Second Prances, Electric Sky briefly appears in the background of Ponyville talking with Rose. In The Fault in Our Cutie Marks, she appears watching Gabby play baseball during Find the Purpose in Your Life. 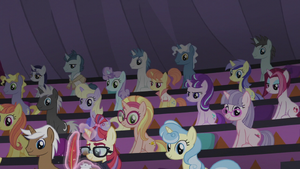