My Little Pony Friendship is Magic Wiki
Register
Don't have an account?
Sign In
Advertisement
in: Female characters, Dragons, Royalty,
and 2 more
English

Ember is a dragon princess and supporting character who first appears in the season six episode Gauntlet of Fire. She is the current Dragon Lord of the Dragon Lands, succeeding her father Torch.

The name "Ember" was previously used for a G1 Earth pony filly, whom foals such as Apple Bloom were inspired by,[1][2][3] and has also been used as one of multiple would-be names for Firebrand in Tails of Equestria.

On March 25, 2018, Jim Miller was asked "What relations does Smolder have with Ember?" and answered "Just a member of the dragon community. No familial relationship."[4]

Princess Ember is introduced in the season six episode Gauntlet of Fire as the daughter of Dragon Lord Torch. When Torch gathers the dragons of Equestria together to compete for the title of new Dragon Lord, Ember expresses a desire to participate, but her father forbids her due to her small size.

Against Torch's wishes, Ember disguises herself in armor and green body paint and takes part in the Gauntlet of Fire. She nearly goes down in the first leg of the race, but Spike saves her from drowning. Believing that "dragons don't do friends", Ember's views about friendship conflict with Spike's. However, she agrees to partner up with him in order to face the Gauntlet's more daunting obstacles.

After making it through several parts of the race together, Ember and Spike's views about friendship diverge again when he risks his well-being to save Rarity. As such, she ends their partnership and continues on by herself. Near the end of the race, however, she saves Spike from Garble and accepts him as her friend. Spike wins the Gauntlet of Fire, but he quickly passes on the title of Dragon Lord to Ember.

In a final verbal confrontation with her father, Ember declares that there is more to being a leader than size and strength. Torch comes to understand his daughter's sentiment, and Ember is crowned the new Dragon Lord. As part of her new position, Ember establishes friendlier dragon/pony relations through Princess Twilight Sparkle.

In Celestial Advice, Ember appears in a simulation produced by Twilight when she considers the Dragon Lands as a possible place to send Starlight Glimmer.

In Triple Threat, Spike accidentally invites both Ember and Thorax to Ponyville on the same day. During her visit, Spike acts distant as he tries to keep her and Thorax apart, causing her to feel ignored. When she eventually confronts Spike about this, she gets into a brief conflict with Thorax, mistaking him for a bear that wishes to cause Spike harm. After the misunderstanding is cleared up, Ember helps Thorax to be more assertive toward his subjects, and he helps her to express her feelings calmly. After she and Thorax reconcile with Spike, they both take part in a ceremony to unite dragons and changelings in friendship.

Ember is mentioned by Starlight in To Change a Changeling and by Spike and Garble in Shadow Play - Part 1. In the latter, it is stated that she has ordered her fellow dragons to make peace with ponies, and not to harm them.

Ember appears in School Daze - Part 1 at the School of Friendship representing the dragon student Smolder. She also attends the "Friends and Family Day" gathering which is inadvertently ruined by Smolder and her fellow students. After Chancellor Neighsay insults Ember and the other leaders, she angrily decides to take Smolder out of the school. In Part 2, when the students are found after they run away, the Mane Six convince Ember to let Smolder re-enroll at the school, against Neighsay's authority and wishes.

Ember briefly appears in Uprooted, showing approval when Smolder wins an arm-wrestling contest against another dragon and signing a permission slip allowing her to return to Ponyville before school restarts.

Ember also appears in Sweet and Smoky. She has trouble tending to the new generation of dragon eggs, which are overdue for their usual hatching time. With assistance from Spike, she realizes that the eggs aren't hatching because the hatching grounds are colder than usual (due to a redirected flow of lava). She has the dragons breathe fire in hopes of warming the eggs up, but it is only until Garble's poetry causes the dragons to laugh that the fire becomes hot enough to hatch the eggs. Ember honors Garble for his actions, defending him from his friends' mockery, and asks that he teach her some poetry.

Ember makes a cameo in Between Dark and Dawn during Lotta Little Things, flying with some other dragons. In The Ending of the End - Part 2, Ember appears during the final battle against Queen Chrysalis, Lord Tirek, and Cozy Glow after being rallied by Smolder. In The Last Problem, Ember attends Twilight Sparkle's coronation ceremony. She also briefly appears in Rarity's group shot during The Magic of Friendship Grows.

Ember appears in the My Little Pony: Friendship is Magic Issue #55-56 story arc Wings Over Yakyakistan, in which Yakyakistan comes under threat from dragons. On page 20 of the former issue, she appears leading the dragons' charge. In the latter issue, she accuses the yaks of breaking a sacred bond between the dragons and yaks. With Spike's help, the two groups come to a peaceful solution, and Ember vows to make herself more worthy of the title of Dragon Lord. In Issue #61, Ember attends the Convocation of Creatures as representative of the Dragon Lands.

In the Signature My Little Pony magazine issue 69 comic Daring friends and the missing story!, Ember appears on page 5 when Twilight Sparkle and Starlight Glimmer are searching for A.K. Yearling's long-lost Daring Do manuscript. She tells Twilight and Starlight that she once saw Gilda carrying it.[5]

DRAGONS are mystical, flying lizard beasts that come in many different sizes, shapes, and colors. They have magical fire breath and spend their time munching on gems when they're not looking for a nice cave to take a nap in. While younger Dragons like Spike are sweet, others can be temperamental. Some are downright evil, like DRAGON LORD TORCH. He's the father of PRINCESS EMBER, who now serves as a kinder, gentler Dragon Lord.

Princess Ember is a character in Gameloft's mobile game, and she serves as a boss during the "Convocation of the Creatures!" event, in which she also has a story role. Her in-game description states, "A marked improvement from her father Torch: She'll at least TRY to talk before choosing to scorch." She also has a story role in the Presentable in Periwinkle event, in which Shining Armor and Princess Cadance invite her to a trade negotiation.

In her first appearance, Ember proves determined and stubborn, desiring to become Dragon Lord so she can be more than just a "little princess". Though she is initially against the concepts of friendship and helping, she forms a bond with Spike, even saving him from Garble, and agrees to share letters with Twilight regarding the ways of dragons.

In Triple Threat, she shows a desire to learn more about the ways of friendship but a profound dislike for hugs, and her lack of knowledge in pony customs leads to some awkward moments. She also displays a short temper, yelling at Spike when he tries to cover up his attempts to avoid her. She does show a level of empathy though, helping Thorax with his assertiveness problems, and showing regret when she realizes besting other dragons in physical combat leads to them being ashamed and humiliated. With Thorax's help, Ember learns to express her feelings more, telling Spike that she is upset about him avoiding her all day.

Ember seems to have a dislike for singing, covering her ears in annoyance after hearing the song Friendship Always Wins, and stopping Fluttershy from singing to the dragon eggs in Sweet and Smoky.

Ember seems to have trouble telling individual ponies apart, mistaking Twilight for Starlight (and vice-versa) in Triple Threat, and having difficulty remembering which pony Fluttershy is in Sweet and Smoky. At the end of the same episode, she develops an interest in poetry, asking Garble to teach her some.

Beginning with The Maud Couple, Ember was added to the opening intro flying out of the School of Friendship.

"I'm smarter than most of these boulderheads and you know it!"
— Gauntlet of Fire

"I don't care what my dad said! I'll show him and every dragon who thinks I'm just a little princess there are better things than being big and strong!"
— Gauntlet of Fire

"Just so you know, this doesn't mean we're gonna pick flowers or exchange necklaces or whatever pony friends do."
— Gauntlet of Fire

"Please don't make me talk about my feelings!"
— Gauntlet of Fire

"You ready to do some death-defying dragon stuff?"
— Celestial Advice

"Oh, sorry. I'm really gonna have to get used to these pony names. Lots of "-lights" and shiny things."
— Triple Threat

"I can say I'm bad at friendship, you can't say it about me!"
— Triple Threat

"Nice to see you too... uh... Which one are you again? The party one? Apple Dash! Or was that the country one?"
— To Fluttershy, Sweet and Smoky

"Oh, I don't know about a Daring Do book, but I remember once seeing a passing griffon carrying a gold bound book with a dragon on the front, many years ago. I think the griffon was called... Gilda?"
— Signature My Little Pony magazine issue 69 comic Daring friends and the missing story![5] 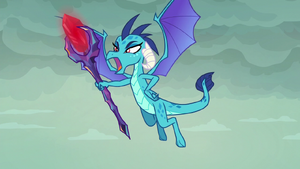