My Little Pony Friendship is Magic Wiki
Register
Don't have an account?
Sign In
Advertisement
in: Earth ponies, Male characters, Pages that need improvement,
and 2 more

Emerald Green is a background pony with an orange coat, white mane and tail, blue eyes, and a cutie mark of four green gemstones. He is an Earth pony both in few in-show appearances and in all merchandise and other media, while he is a Pegasus in most in-show appearances. He is not named in the show, but he is named in merchandise and other media.

Emerald Green first appears as a Pegasus pony and weather factory worker in Sonic Rainboom. Later, in The Super Speedy Cider Squeezy 6000, he appears as an Earth pony sharing cider with Rainbow Swoop.

Emerald Green appears, once again as a Pegasus, in Pinkie Pride during Pinkie Pie and Cheese Sandwich's goof-off. He attends the titular sporting event in Equestria Games, helps other Pegasi move clouds in Tanks for the Memories, and appears at the Grand Equestria Pony Summit in Princess Spike.

Emerald Green is a playable character in Gameloft's mobile game, added in the version 2.1 update. His in-game description states, "Emerald Green is Sweet Apple Acres' resident cider aficionado and is known for serving up the most delicious apple cider in all of Equestria!" An in-game advertisement listed him as "Emerald reen" instead of Emerald Green.

In Enterplay's collectible card game, Emerald Green is named and identified as an Earth pony on his own card #12 C, which gives him the description "Emerald is sometimes confused for his winged cousin in Cloudsdale. He doesn't really seem to mind." According to Enterplay's May 9, 2014 full card list by Christine Hullemeyer, Emerald Green "was Green Gem".[1] 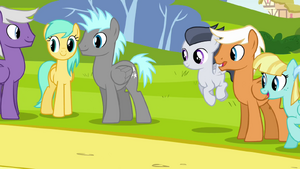