Equestria Games is the twenty-fourth episode of the fourth season of My Little Pony Friendship is Magic and the eighty-ninth episode overall. In this episode, Spike's nerves get the better of him when he is put in charge of lighting the Equestria Games torch.

This episode is listed on Zap2it as the twenty-fifth episode of the fourth season.[3] However, Jim Miller wrote on Twitter that "Games is 424".[4]

The episode was first teased on December 16, 2013, when Hasbro's My Little Pony Facebook page posted an image of the Cutie Mark Crusaders including the text "The Equestria Games are coming!"[5] It was further teased on February 7, 2014, coinciding with the Opening Ceremony of the 2014 Winter Olympics in Sochi, when the Hub Network posted a screenshot from this episode.[6]

Aside from a few tips given to her beforehand, Cathy Weseluck's performance of Cloudsdale's anthem was improvised.[7]

The Ponyville representative teams are on their way to the Equestria Games. On the train ride to the Crystal Empire, Rainbow Dash says a few words of inspiration to her teammates and fellow competitors. She's uncertain of her own team's chances against the Wonderbolts, but Scootaloo cheers her up by saying, "Winners or not, we still have a chance to be awesome!" Rainbow Dash thus encourages everyone to give their best.

Spike the Brave and Glorious

As the train arrives at the Empire, Spike loads everyone's gear onto a wheel cart. Apple Bloom starts to worry that they're not prepared for their flag-carrying routine, so Spike teaches her a trick he uses whenever he gets nervous about a task: counting to ten.

During his talk with the Crusaders, Spike is suddenly carried away by a pair of Crystal Pony royal guards, who deliver him to Twilight Sparkle and Princess Cadance in front of the palace. Inside, the Crystal Ponies pamper Spike and treat him like royalty. Twilight and Cadance explain that, because of Spike's role in saving the Empire from King Sombra, he is recognized throughout the Empire as a hero and is known as "Great and Honorable Spike the Brave and Glorious".

Because of this, Cadance asks Spike to light the torch during the Equestria Games' opening ceremony. Spike gladly agrees, adding that as a dragon he can do so with his fire breath.

In the Equestria Games stadium, a gigantic crowd of ponies cheers and Shining Armor briefly addresses the athletic and flag-carrying teams. Twilight goes up to the exclusive box seats, where Princess Celestia, Princess Luna, and other significant members of Equestrian society are already seated, and takes her seat next to Celestia.

Spike makes his way to the stadium with Ms. Harshwhinny, who explains to him the procedure for lighting the Games torch. When they reach the torch platform, Spike becomes overwhelmed by the sheer number of ponies watching him. The Cutie Mark Crusaders carry out their flag routine and the Ponyville team enters the stadium. With some persuasion by Ms. Harshwhinny, Spike climbs up to the torch and finds both his fire breath and his calming trick of counting to ten not working.

Due to the torch lightning's delay, ponies in the crowd become confused or worried. When Twilight sees the trouble Spike is in, she discreetly casts a spell that lights the torch for him, and the crowd cheers. Ms. Harshwhinny is unsure how Spike pulled it off, but nevertheless, the Equestria Games finally begin.

Outside the stadium, Rainbow Dash, Rarity, and Applejack congratulate the Crusaders for their flag routine. Twilight meets with her friends and admits to them that she lit the torch for Spike so he wouldn't be embarrassed. When Spike walks up, Twilight is about to tell him the truth, but he's convinced that he can light fires with his mind. He tries to demonstrate this "skill" for Bright Smile and Elbow Grease but to no avail. Twilight takes Spike aside and tells him that she lit the torch for him. Thinking that he's let down all of Equestria, Spike walks away utterly heartbroken.

Twilight's friends return to the stadium in time for the aerial relay—Rainbow Dash and Fluttershy's event. As they enter, Rarity is told by security guards to have her magic disabled before entering the stadium to prevent cheating. As the aerial relay takes place, Spike asks Ms. Harshwhinny if he can do anything else for the Games. Ms. Harshwhinny is dismissive of his request; when she makes a sarcastic remark about him putting on a rock concert, Spike gets an idea.

In the aerial relay, the Wonderbolts take gold and the Ponyville team silver. At the medal-awarding ceremony, Shining Armor is about to signal the start of an anthem when Spike jumps in, eager to "do the honor of singing". Unfortunately, since the Wonderbolts won the event, the anthem to be sung is the Cloudsdale anthem, to which Spike doesn't know the words. With the spotlight and everyone's eyes focused on him, Spike sings an awkward and lyrically inaccurate rendition of the Cloudsdale anthem, much to the discomfort of everyone listening (except Pinkie Pie, who gives his performance an excited "Nailed it!").

For the rest of the Games, Spike holes up in a Crystal Empire bedroom, where the Crusaders find him packing up for their departure the next day. Back at the stadium, Shining Armor announces the final event of the Games: ice archery. With Ponyville having thirty-seven medals to Cloudsdale's thirty-six and Cloudsdale having two archers taking part in the event, Twilight's friends are anxious over the outcome.

When Twilight goes to drag Spike out of hiding, he disguises himself and continually puts himself down, reluctant to face the crowds again. During the ice archery event, one of the archers trips up and accidentally shoots an ice arrow into the sky. The arrow turns a cloud into a large mass of ice that starts to fall toward the stadium. A number of Pegasi fly up to slow it down but are unable to divert it away from the crowd, and the security guards don't have time to undo their magic-disabling spell.

Springing into action, Spike hops up on the backs of several Pegasi and shoots the ice from below with a tremendous blast of fire, melting it into water and steam. The crowd cheers, and all of Spike's friends commend him for his actions. Spike, however, feels no pride in himself and simply did "what needed to be done". Twilight understands, saying that only Spike can fix the disappointment he has in himself. To that end, Cadance asks Spike to light the fireworks for the Equestria Games' closing ceremony in her stead.

In the end, Ponyville wins the medal count for the Games by a single medal, and the closing ceremony is underway. Spike, having overcome his earlier doubts, lights the ceremonial fireworks, and they explode over the stadium.

"No matter how many times others tell you you're great, all the praise in the world means nothing if you don't feel it inside. Sometimes to feel good about yourself, you gotta let go of the past. That way, when the time comes to let your greatness fly, you'll be able to light up the whole sky."
— Spike

Rainbow Dash: This just got real!

Princess Cadance: You are known throughout my empire as "Great and Honorable Spike the Brave and Glorious".
Twilight Sparkle: Isn't that awesome? You're a big shot here, Spike! See that? That's you!
Spike: [a la Barbara Streisand] Hello, gawgeous!

Ms. Harshwhinny: Mr. the Dragon. Are you coming? [to herself] Honestly. [out loud] Would somepony help him walk?

Twilight Sparkle: Equestria, we have a problem.

Spike: Upset? Are you kidding? Why would I be upset to discover that I can light fire... with my mind?
Applejack, Rainbow Dash, Rarity and Twilight Sparkle: What?!

Spike: Hey, you'd better be careful with that! It might burst into flames later! Delayed reaction.

Spike: Maybe there's something else I can do for the Games. Y'know, something really worthy of the Crystal Empire's admiration?
Ms. Harshwhinny: What are you talking about? You lit the torch for the whole thing!
Spike: Uh, well, actually, that wasn't really-
Ms. Harshwhinny: That wasn't worthy enough for you? Ugh, for pony's sake. Next thing you know, you'll be asking to put on a rock concert. [snorts] [to herself] Celebrities...

Princess Cadance: I just wanted to thank you personally for saving those ponies and the Games, O Great and Honorable Spike the Brave and Glorious. You must be very proud.
Spike: I guess.
Mane 6 and the Princesses: You guess?! 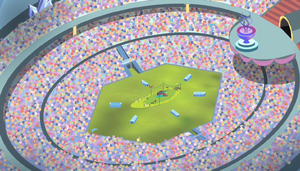