The Friendship Express on its way to the Crystal Empire.

A beautiful scenery of the Crystal Empire.

"This just got real!"

The Ponyville Pegasi warming up for the Games ahead.

Gotta make sure we have everything we need...

...is with us and unbroken!

Even Fluttershy is exercising.

What? This does count as exercise...doesn't it?

Who here besides me believes we're gonna do great!?

"No shot at getting gold either."

"There are no winners!"

Remember that we're the best that Ponyville has to offer!

But let's still try to win as many medals as we can, okay?

Work hard ponies, it'll be worth it.
Add a photo to this gallery

Arrival at the Crystal Empire

Arriving at the Crystal Empire train station once again.

Even in episodes focused on him, Spike's still the luggage mule.

That's a lot of luggage!

They can always count on me!

Are you really really sure you've got everything?

"I have a simple trick."

"Are you all right?"

I've never seen royal guards so respectful to a dragon before!

Spike likes the green ones.

Spike finally getting the adoration he deserves!

Spike the brave and glorious... with an emerald pacifier. Also known as the Boss Baby!

A monument to greatness and awesomeness!

Oops!
Add a photo to this gallery

"Places for the procession, everypony!"

The CMC are excited.

Try to name all of the cameos in this shot. Can you find Coco Pommel? (Also, is that Bulky's mother?)

I'm so upset that i can't sit with my friends.

Celestia invites Twilight to sit next to her.

Oh look! Cadance is in the royal booth too!

Spike is having second thoughts about this idea or he could be having a similar fear to Fluttershy's.

"Would somepony help him walk?"

Nice to know she isn't the regalish princess we don't want her to be.

It's okay to do adorkable things, Twi.

Rarity must have updated the uniforms.

"This is the signal."

"I'm giving you the signal now!"

"Come on, Spike! Calm yourself!"

Spike: What? No I breath fire! Sort-of.

"Equestria, we have a problem!" Nice NASA reference!

"Did you bring a match?"

"You're a fire-breathing dragon."

Come on, Spikey! Luna doesn't have all day! She's got a moon to raise!

You go "phew!" now, Twilight, but wait until the next scene.

"You three really were wonderful."

"But does anypony know what was going on with Spike?" (Uh...Twilight, wrong wings.)

Hey, Dashie, the '90s called. They want their lingo back.

"You know what else is amazing?"

"Ask someone special instead."

What?
Add a photo to this gallery

Hey, it's Sapphire Shore's body guard that was being rude to Sweetie Belle!

Rarity is not happy about this.

"Hmph!" Yeah, why would anypony think that Rarity of all ponies would cheat?!

You'd think by now that Bulk would have upped his game.

"We'll have eight medals so far."

Hey, easy with the popcorn, Pinkie!

"What are you talking about?"

Spike gets a (terrible) idea.

Yay! We got silver!

Wonderbolt hoofbump!
Add a photo to this gallery

Interesting how indifferent Rainbow is about getting silver.

"What are you doing?"

A spotlight. This does not look good for little Spike.

Didn't you know that Cloudsdale won the relay?

Oh, you gotta be kidding me!

Still think this was a good idea, Spike?

Oh, my Celestia, this is painful.

You're lucky we TV viewers have DVR.

The Bolts are probably not feeling like winners anymore. And Bolts, what do you think of Spike's Cloudsdale song?

It's too horrible to watch!

Pinkie talking to Twilight whilst standing on a crystal pony's head

Get off my head already, Pinkie!

"Can we at least watch from inside?"

Distracted by #7, and nervous.

This doesn't look good!
Add a photo to this gallery

Spike saves the Empire once again

Panicked princesses. Only not doing anything, they hardly do anything at all.

Who said Celestia and Luna stood there and did nothing...?

"There isn't time!" Way to think ahead, you silly.

Spike knows what to do!

Time to come out of hiding!

Think back to how he breathed fire back in Dragon Quest

I'm singing in the rain!

Don't even think about it, Twi!

I know how you can make up for the opening ceremony!

Fluttershy and Rainbow proud of their silver medals.

The Apple sisters at their cutest. 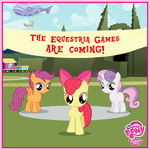 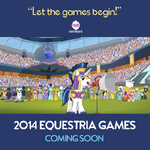 The poster for the Equestria Games posted on the Hub's Facebook page.

The teams have gathered for a pic on the Hub's Instagram.

All the teams looking at the unlit torch. 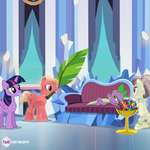 Spike's fire breath to light the torch is being an uncooperative jerk.

"Winners or not, we all still have the chance to be awesome."