The Everfree Forest is a wild wooded area on the outskirts of Ponyville that is introduced in Friendship is Magic, part 2. It is presented as a mysterious place that is home to a variety of creatures and animals, and it possesses a quality that allows plants and animals to thrive without pony intervention, which ponies consider "unnatural". It is also where Zecora makes her residence and contains other locations such as the Castle of the Two Sisters and the Tree of Harmony.

The Everfree Forest is first introduced in Friendship is Magic, part 2, when Twilight Sparkle reads the book The Elements of Harmony: A Reference Guide. It specifies that the Elements of Harmony's last known location is in the ancient Castle of the Two Sisters, and that the castle itself is located in what is now known as the Everfree Forest. Twilight Sparkle and her friends enter the forest in order to retrieve the Elements.

When the ponies venture for the first time into the forest, Applejack surmises that "It ain't natural; folks say it don't work the same as Equestria". In Bridle Gossip, Applejack, Fluttershy, and Rainbow Dash elaborate that the plants grow on their own, animals take care of themselves, and clouds move without pony intervention.

Fluttershy, who lives in a cottage near the edge of the forest, tells the Cutie Mark Crusaders in Stare Master that the forest is "much too dangerous" and is "filled with far too many strange creatures". These include timberwolves, the manticore, a notable sea serpent, Ursas, parasprites, dragons, and the cockatrice. Timberwolves are shown in both Family Appreciation Day and Spike at Your Service, while the rest are respectively featured in Friendship is Magic, part 2, Boast Busters, Swarm of the Century, Owl's Well That Ends Well and Stare Master. The abundance of monsters explains why the ponies are wary of the fact that Zecora makes her home in the Everfree Forest, citing it as one of the reasons they fear her in Bridle Gossip.

In Boast Busters, Trixie lies that she saved Hoofington from an ursa major that came from the Everfree Forest.

The forest is mentioned more than once as a place of banishment. When Rainbow Dash panics over her impending performance in Sonic Rainboom, she fears that she will be banished into the Everfree Forest for her failure. Similarly, in A Bird in the Hoof, Twilight suggests that she and Fluttershy will be banished and possibly imprisoned in the Everfree Forest for kidnapping Princess Celestia's pet phoenix, Philomena.

The Everfree Forest also contains many types of flowers, poison joke being among them. In Bridle Gossip, Zecora cures Twilight Sparkle and her friends by using medicinal plants.

Granny Smith mentions in a flashback in Family Appreciation Day that she ventured into the Everfree Forest one night when she was young and discovered zap apples. Shortly after, she was chased back to her farm by timberwolves.

In the episode Too Many Pinkie Pies, Pinkie Pie ventures into the Everfree Forest to look for a magical pond that she recalls from a nursery rhyme. She pushes through dense brambles and unexpectedly falls down a hole but ends up in an underground cavern that houses the Mirror Pool. She recites, "And into her own reflection she stared, yearning for one whose reflection she shared, and solemnly sweared not to be scared at the prospect of being doubly mared!" and steps through the surface of the pond, successfully cloning herself. This process continues until there are a sizable number of clones, who start overwhelming Pinkie's friends. When all the clones are sent back, Twilight seals the entrance to the Mirror Pool with a boulder.[1]

In the episode Magic Duel, Twilight trains in the forest with Zecora in order to defeat Trixie after she loses to her thanks to Trixie's Alicorn Amulet.

In Spike at Your Service, Spike accidentally enters the Everfree Forest and is attacked by Timberwolves, and saved by Applejack.

In season four's two-part premiere, the Everfree Forest begins to grow out of control, causing bramble vines to overrun Ponyville. To prevent the vines from overrunning all of Equestria, Twilight and her friends return the Elements of Harmony to the Tree of Harmony, which lies in the heart of the Everfree Forest. It is later revealed that the vines are the work of Discord, who planted plunderseeds long ago when he first fought Celestia and Luna. The magic of the Tree of Harmony kept the vines from growing properly over the centuries, and it was only recently that the spell was weakened enough for the vines to grow outside the forest. With the Elements returned to the Tree, the protective spell is reinforced and the vines destroyed.

In an alternate timeline in The Cutie Re-Mark - Part 2, Zecora uses the Everfree Forest as a base for her resistance against the changeling invasion. Queen Chrysalis finds the hideout and engages Zecora in combat, forcing Twilight Sparkle and Spike to flee.

In Flutter Brutter, Fluttershy's brother Zephyr Breeze attempts to live on his own in the Everfree Forest after she kicks him out of her cottage. In 28 Pranks Later, Rainbow Dash scares Fluttershy and her animals friends to prank her as they walk through the forest at night.

In It Isn't the Mane Thing About You, Rarity and Pinkie Pie travel through the Everfree Forest in order to reach Zecora's home. In A Health of Information, Fluttershy and Zecora visit a swamp in the Everfree Forest to collect crisscross moss. After getting sprayed with pollen from a lilypad flower, Zecora contracts Swamp Fever.

In School Daze - Part 2, the Everfree Forest can briefly be seen around the Castle of the Two Sisters as the party cannon is used to blast away puckwudgies after they attack the Young Six. In Molt Down, Spike, Rarity, and Zecora get attacked by a giant roc while visiting the latter in the Everfree Forest. Spike eventually defeats the Roc after completing the molt effect. In The Mean 6, Twilight and her friends (including Starlight Glimmer) make their way through the forest in order to get to the camp site Twilight set up by the Tree of Harmony. Queen Chrysalis uses several of the forest's trees as part of a spell to create copies of Twilight and her friends, seeking out the Tree of Harmony in order to steal the Elements of Harmony.

In The Beginning of the End - Part 1, Queen Chrysalis plots revenge against Twilight Sparkle and her friends for stealing her kingdom in the forest. In The Beginning of the End - Part 2, the destruction of the Tree of Harmony in the prior episode causes the forest to start growing out of control. Twilight and her friends attempt to deal with it, and are relieved by the arrival of Celestia, Luna, and Star Swirl the Bearded. The three take over containing the plant life, with Star Swirl revealing that he had filled a similar role before the Tree of Harmony's creation. In Uprooted, the Young Six try to build a tribute to the Tree of Harmony in the cave inside the forest.

In Student Counsel, Starlight Glimmer and her friends journey through the forest in hopes of finding the missing Silverstream. In Between Dark and Dawn, Celestia and Luna help a lost Filly Guide troop when they get lost in the forest by blasting a path to their campsite. Celestia and Luna later visit the forest during their vacation and split up. Celestia gets lost in the forest, but eventually reunites with Luna. In The Last Crusade, the Cutie Mark Crusaders unsuccessfully stage a fake "banshee beast" sighting in the forest to convince Scootaloo's parents to let her stay in Ponyville. In She Talks to Angel, Fluttershy in Angel's body runs through the forest to Zecora's house to have her switch back their bodies, narrowly avoiding getting eaten by an eagle in the process.

In My Little Pony Equestria Girls: Spring Breakdown, Sunset Shimmer, Twilight Sparkle and Rainbow Dash pass through a portal to Equestria, and emerge in the Everfree Forest on the other side.

In the My Little Pony: Friendship is Magic Issue #27 and #28 story arc The Root of the Problem, creatures and living vines from the Everfree Forest invade Ponyville. It is caused by a tribe of deer living in the secluded forest village of Thicket. When a construction company destroys forest land to make room for an amusement park, the deer use their unique magic to make the Everfree Forest expand outward, covering its bordering lands and villages in plants. In the arc Ponies of Dark Water, Fluttershy forms an army of animals in the Everfree Forest with the intent of invading Ponyville. In the arc Tempest's Tale, the forest is seen briefly in Issue #67 and mentioned in Issue #68.

In the arc Cosmos, Issue #75 shows the forest as the resting place of one of the stars imprisoning Cosmos, who is revealed to be responsible for its wild condition in Issue #77.

According to one of the comics in the German magazine, a land outside of Equestria lies beyond the Everfree Forest. 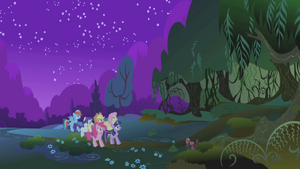