Every Little Thing She Does

In this episode, Starlight Glimmer tries to impress Princess Twilight by taking on multiple friendship problems at once.

The episode begins at the Castle of Friendship in the early morning. Twilight Sparkle prepares to quiz her pupil Starlight Glimmer with a full day's worth of magic spells to perform, including rapid teleportation to multiple locations, object transfiguration, and magic shields.

Starlight excels at her magic studies with Twilight, even using advanced spells to go incredibly fast and duplicate herself. However, Twilight points out that Starlight hasn't addressed any friendship lessons since she befriended Trixie. Becoming uneasy, Starlight says she will find the time to tackle some between her "many commitments". Twilight says now is the perfect opportunity since she and Spike are expected in Canterlot to give a presentation at Princess Celestia's School for Gifted Unicorns. She suggests that Starlight complete a friendship lesson before they return later that evening.

Though Starlight outwardly insists that it will be no problem, her unease around Twilight – and later Spike – indicate otherwise. In her castle bedroom, she has several friendship problems planned out: baking with Pinkie Pie, scrap-booking with Applejack, sewing with Rarity, helping animals with Fluttershy, and "chillaxing" with Rainbow Dash.

"I could combine all five of these at the same time without breaking a sweat."
— Starlight Glimmer

A short while later, after Twilight and Spike have left, Starlight Glimmer gathers the rest of the Mane Six at the castle to carry out her friendship lessons with them. Applejack advises Starlight to take her time with her lessons, but Starlight is certain she can handle it as long as they work as a team.

She assigns Pinkie Pie to the kitchen, Applejack and Rarity to the library, and Fluttershy and her animals to the castle foyer. However, Rarity has reservations about sewing in a dusty environment, and Fluttershy's animals each require specific habitats. In addition, Rainbow Dash suggests "specific conditions for optimal chillaxing", and Applejack has over eighty moons' worth of photos to scrapbook. Starlight is overwhelmed by the taxing requirements of the friendship lessons before her, and she retreats to the library.

As she worries about completing her lessons in time for Twilight's return, Starlight decides to use magic to lighten her stressful workload. Using the Fiducia Compelus spell in conjunction with Cogeria and Persuadere, she brings her friends under her direct control.

With the ponies now under her control, Starlight directs them to the locations in the castle that she originally assigned them to, and they follow without question or hesitation. First, she bakes in the kitchen with Pinkie Pie, and Pinkie simply follows Starlight's orders in a cheerful, stilted tone. In the library, Rarity and Applejack exhibit identical behavior, doing whatever Starlight tells them to do, and Fluttershy and Rainbow Dash do the same in the foyer.

As time goes on, however, Starlight grows bored of Applejack's long-winded stories, Rarity takes Starlight's orders too literally while sewing clothes, Pinkie Pie makes a large mess in the kitchen, and Fluttershy gets carried away in her animal care by bringing together all of the spiders and snakes in the castle. To make matters worse, Starlight accidentally fills the castle with smoke when she leaves the cakes in the kitchen oven unattended. Starlight commands Rainbow Dash to get water, and she responds by bringing storm clouds into the castle and causing a flood.

Just as Starlight Glimmer thinks the situation could not get any worse, Twilight and Spike return from Canterlot to behold the big mess in the castle.

As Twilight and Spike clean up Starlight's mess, Starlight tries to figure out what went wrong with her spell. She believes she did not cast it correctly or reverse its effects earlier than she was supposed to, but Twilight and Spike agree that she is missing the point.

When asked how things got as out of control as they did, Starlight admits that she has been deliberately avoiding her friendship lessons. Though she excels greatly at magic, she feared failing such simple tasks as baking with Pinkie or sewing with Rarity and thus letting Twilight down. However, Twilight points out that the purpose of her friendship lessons is to get to know other ponies better, not to complete tasks as baking or sewing.

At the Ponyville Cafe, the rest of the Mane Six are left suffering from hangover-like fatigue by the lingering effects of Starlight's magic. When Starlight approaches them, they express how upset they are at Starlight using her magic to mind-control them. Starlight accepts the consequences of her actions and offers her sincerest apologies to her friends. Before she leaves, the ponies see how genuinely sorry she feels. They offer to help her clean up the mess she made at the castle and give her a second chance for them to have fun together.

Over the course of the day, Starlight spends time with each of Twilight's friends, getting to know them better while Twilight supervises. She fixes up the castle tapestries with Rarity, listens to Applejack's family anecdotes, helps Fluttershy find a home for the castle spiders, and bakes with Pinkie Pie. As she finishes tidying up the castle, Starlight says it may be a while before she tries addressing any friendship problems, but Twilight says she has been doing so all day without realizing. The only task that remains is "chillaxing" with Rainbow Dash.

Starlight Glimmer, Mane Six, and Spike conclude their day by lounging together on the castle roof, and Twilight commends Starlight for completing another friendship lesson. As Starlight asks how long they need to "chillax", the eight friends share a laugh.

Starlight Glimmer: I've discovered a very old spell, Similo Duplexis, when combined with Accelero in just the right way... [doubled up] ...you can literally be in two places at once!

Twilight Sparkle: Princess Celestia wanted me to give her students a quick overview on the history of enchanted objects in Equestria. We'll be back after the presentation, which should be...
Spike: Twenty moons from now?
Twilight Sparkle: Tonight. It's a quick presentation.
Spike: [to himself] Sure, keep telling yourself that...

Spike: What is chillaxing?
Starlight Glimmer: No idea.

Spike: And I thought Twilight was the master of the freak-out.

Applejack: [mechanically] They can take our farm, but they can't take our freedom!

Starlight Glimmer: Maybe if I had reversed the Fiducia Compelus and Cogeria... Or maybe I added too much Persuadere... What?
Spike: You're really missing the point here.

Starlight Glimmer: Well, it was the first time I cast that particular spell, and I didn't really think it through. I-I bet if I had reversed—
Twilight Sparkle: I think you might be missing the point here.
Spike: Told ya.

Starlight Glimmer: You know, I think I might have missed the point here.
Spike: Told ya.

Starlight Glimmer: I really messed up. I cast the spell because I was nervous about working with you all on the friendship lessons.
Rainbow Dash: Well, here's a friendship lesson for ya — don't cast spells on your friends! 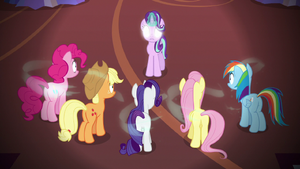 Every Little Thing She Does image gallery