Fake It 'Til You Make It

View source
watch 01:34
'My Little Pony' Recap: Fake It Til You Make It
Do you like this video?
Play Sound

Fake It 'Til You Make It[note 1] is the fourth episode of season eight of My Little Pony Friendship is Magic and the one hundred and seventy-third overall.

When Fluttershy looks after Rarity's Manehattan boutique, she takes on a series of characters to cope with the intimidating clientele.

The basic premise for this episode was originally pitched by producer Devon Cody.[1]

A catwalk shot is visually re-used from the season one episode Green Isn't Your Color.

A print adaptation of the episode is included in the August 9, 2018 My Little Pony Annual 2019 published by Orchard Books in the United Kingdom; this adaptation's last two pages were released online as part of the book's December 12, 2017 preview,[2][3] predating the announcement of this episode.

The scene when Fluttershy goes through her many personalities to insult the customers reappears in Memnagerie.

The episode begins at the Sweet Feather Sanctuary, where Fluttershy has a picnic with all of her animal friends. Suddenly, Rarity arrives with a crisis: the Canterlot Royal Fashion Show is taking place soon, and she is having trouble finishing the centerpiece dress of the new collection she plans to debut. She intends to have Sassy Saddles and her three Manehattan boutique assistants help her finish the dress, but it would leave Rarity For You without any employees to run it during Manehattan's busiest shopping season. Having already asked the rest of their friends, Rarity turns to Fluttershy for help in running the store, and Fluttershy agrees.

At Rarity For You, Rarity explains to Fluttershy the various sections that the boutique is split up into—including chic, classic, and modern—and how to run the cash register. When a customer enters the store, Fluttershy practices making a sale, but she gets intimidated by the customer's brazen Manehattan personality. Once Rarity sees to the customer's needs, she tells Fluttershy not to be timid and to simply access the strength and confidence she has within.

Before Rarity departs for Canterlot with her boutique assistants, she leaves Fluttershy with the help of Smoky, Softpad, and Smoky Jr. She also suggests that Fluttershy put on an outfit to help her get into her new role as a salespony.

"You know what they say: clothes make the pony!"
— Rarity

When another customer enters the boutique, Fluttershy tries once again to see to their needs, but she is again intimidated by their forward personality and sophisticated demands. She retreats to the store's back room, where the raccoons encourage her to follow Rarity's advice and put on an outfit. In this outfit, Fluttershy adopts a more sophisticated and haughty persona to match that of the customer, and she is able to make a sale.

On her way to the Manehattan train station, Rarity starts to have second thoughts about leaving Fluttershy alone around the high-and-mighty personalities around in the city. But when she hears from one of Rarity For You's customers about how well Fluttershy performed, she feels reassured and continues on toward Canterlot.

Back at Rarity For You, Fluttershy's "sophisticated salespony" character results in good business for the store, but it clashes with the Valley girl-type customers, so Fluttershy adopts a second new persona to accommodate. When she meets customers with Goth personalities, Fluttershy adopts a third new persona to match them. However, as Fluttershy gets deeper into her characters, she starts to snap at her raccoon friends for not catering to the customers properly, and she even starts to drive away customers with her over-the-top personalities. She eventually gets so upset with the raccoons that they quit and leave.

"It is so hard to find good help these days."
— Fluttershy

At the School of Friendship, Smoky, Softpad, and Smoky Jr. inform Twilight Sparkle and Spike of what's been happening in Manehattan, and they go to gather the rest of their friends together. They travel to Manehattan's Saddle Row and witness firsthand how rude Fluttershy is acting toward the customers in her new salespony personas. The ponies try to talk to her, but she continues to act as her salespony characters toward them and dismisses her raccoon friends as unwanted rodents. When they try to tell her there's a better way to address the customers, she kicks them out of the boutique.

At the Canterlot Royal Fashion Show, Rarity and her designer assistants still struggle with the centerpiece dress of Rarity's new collection. When her friends arrive to inform her of what's going on at Rarity For You, the news comes as a considerable surprise to her, and she agrees to help resolve the situation.

Back at Rarity For You, Fluttershy continues to upset and offend her customers with her personas' remarks. When Rarity sees the state the shop is in and Fluttershy's insensitive views toward its clientele, she fires Fluttershy three times—once for each of her individual new personas. Finally dropping the act, Fluttershy apologizes for taking her salespony characters too far and for hurting her raccoon friends' feelings. She explains that acting like the ponies of Saddle Row gave her the confidence to interact with them.

Rarity tells Fluttershy that she wanted a friend to run her shop instead of someone like the rude ponies of Saddle Row and that she already had all the strength and confidence she needed to run it. This lesson gives Rarity the inspiration she needs to finish the centerpiece dress of her new collection.

With Fluttershy as her model, Rarity debuts her "Warrior of Inner Strength" dress to the ponies of Manehattan, and it is met with great positive reception. Fluttershy feels sorry that Rarity had to leave the Canterlot fashion show early, but Rarity insists that making the perfect dress is more satisfying than showing it off. When a Saddle Row pony insinuates that Rarity's dress debut is an attempt to undercut the Canterlot fashion show, Fluttershy demonstrates her real inner strength by telling the pony off.

Pursey Pink: I need something classic but modern. Something with drama but also understated.
Fluttershy: Um, aren't all those things opposites?
Pursey Pink: Yes. So?

Rarity: Why not try a new outfit? Think of it as the costume for your role as... Shop Pony! Ha ha! You know what they say – "clothes make the pony".
Fluttershy: Um, who says that?
Rarity: You know, "them".

Fluttershy: [hipster voice] Okay, I've got, like, this high-key savage look for you? It's a totally live ensemble with a little, like, thingies that sparkle and make the whole squad go, "Whoa! That pony is 'woke'!"

Fluttershy: [goth voice] It's not like the futility of shopping can be made better with black leather and metal studs, but they help.

[raccoons chittering]
Spike: So, Rarity is busy at an important fashion show, and Fluttershy is running her shop in Manehattan, but to do it, she's playing different shop pony characters that are all mean?
[raccoons chittering happily]
Twilight Sparkle: How in the world did you figure that out, Spike?
Spike: I'm not Dragon Charades champion for nothin'!

Fluttershy: [snooty voice] Ugh, honestly! These small town ponies come to the big city and think they can behave any way they please!
Rainbow Dash: What?! You are a small-town pony! And your cottage isn't even in the town!

Fluttershy: I'd definitely rather be myself anyway, even if I don't exactly have what it takes to be a shop pony.
Twilight Sparkle: I wouldn't sell yourself short. Those salespony characters all came from you!
Rainbow Dash: Yeah! I think you totally have what it takes.
Pinkie Pie: Maybe a little too much. 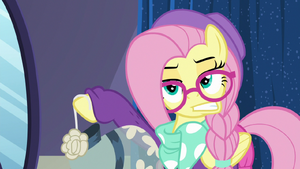 Fake It 'Til You Make It image gallery