Fall Weather Friends is the thirteenth episode of the first season of My Little Pony Friendship is Magic. In this episode, Applejack and Rainbow Dash's sportsmanship is put to the test as they face off in an Iron Pony competition to see who the better athlete is. The title is a play on fair weather friends, which refers to people who are only friends when it is convenient (when weather is fair) and will abandon their friends during bad times.

According to the episode's writer, Amy Keating Rogers, Applejack saying "Pete's sake" was originally "Corn's sake", as a reference to the I Love Lucy character Fred Mertz.[2] The line was later used in the season four episode Filli Vanilli.

The episode begins at Sweet Apple Acres during a game of horseshoes. Applejack bests Rainbow Dash by a ringer. While the farm pony assures her that it was all in good fun, Rainbow Dash says she hates losing. She challenges her friend to an Iron Pony competition, a series of sports contests, to decide who's the best athlete. Pinkie Pie and Rarity are spectators, Twilight Sparkle is the events' judge, Spike acts as announcer, and Fluttershy tallies the scores.

Applejack completes the first event, the barrel weave, in 17 seconds, but receives a five-second penalty for bumping into one of the barrels. Rainbow Dash brushes through flawlessly in 18 seconds, earning one point.

In the Strength Test, Rainbow Dash bucks the hammer hard enough to hit the bell at the top, but Applejack kicks the hammer hard enough to break it and send the bell flying, earning her a point. She credits her prowess to "years of applebuckin'." and kicks the tree Dash is sitting underneath. Apples fall on Dash's head to the tune of Shave and a Haircut.

The goal of the next test, the Bronco Buck, is to buck Spike off in the shortest amount of time; Rainbow Dash wins this round. In Calf Roping, the contestants must lasso Spike; Applejack easily does this as Rainbow Dash accidentally ties herself to a tree branch. In the next round, Rainbow Dash beats Applejack at balancing and bouncing balls. Applejack brings the score back to 3-3 by shot-putting a bale of hay a further distance. Rainbow Dash wins the arm-wrestle, and Applejack bucks a football much further (4-4). Halfway through the competition, the ponies are tied 5-5, and most of Ponyville has joined the spectator stands.

Refusing to lose, Rainbow Dash starts winning more events by using her wings. She briefly flaps her wings to win a grueling push-up contest, propels herself forward in the Long Jump to gain a few more inches, and carries a flock of baby chicks on her outstretched wings in a race across some mud. In the last event, a game of tug of war, Rainbow Dash flies up and tricks Applejack into talking and thus letting go of the rope. Applejack falls into the mud pit. With a staggering 15-5, Rainbow Dash "wins" the competition. Applejack calls out her friend for cheating with her wings. Rainbow Dash brings up the fact that she never said not to use her wings, but Applejack responds that she shouldn't have to. The farm pony challenges her to the annual Running of the Leaves, under the condition that she does not use her wings at all. Rainbow Dash accepts the terms.

The Running of the Leaves

After Applejack and Rainbow Dash agree to race in the Running of the Leaves, the scene cuts to black and fades to Twilight and Spike walking to the race. Spike mentions he wants to be the race's announcer, but the frame pans to Pinkie Pie in the Twinkling Balloon, who has already taken the role of announcer. She explains that the competition is one of Ponyville's traditions and its purpose is to shake the autumn leaves off the trees with the pounding of footsteps.

At the starting line

Pinkie Pie invites Spike to join her in commentating. As the racers gather at the starting line, Applejack makes sure Rainbow Dash will keep good on her promise by tying her wings up. To their surprise, Twilight Sparkle joins the race to experience it herself, giving them the opportunity to mock their "egghead" friend. They are deeply amused by the fact that she has never run a race but has read on the subject.

The marathon begins and Rainbow Dash and Applejack are already leading, determined to win once and for all. They are neck and neck before Applejack trips over a rock. She immediately accuses her rival of intentionally tripping her. With the exception of Twilight Sparkle, who is casually strolling behind and enjoying the scenery, the rest of the ponies rush past her. Twilight informs her that she didn't look where she was going, and Applejack dashes off to make up for lost time. Later, Rainbow Dash slows to a comfortable trot, confident of her lead, but Applejack runs past her. This time, the Pegasus trips over a stump and falls second-to-last next to Twilight Sparkle. She reminds Rainbow Dash that this is just a game. Too stubborn to believe that her apple-bucking friend would never stoop to such acts, Rainbow Dash decides to play dirty. Pinkie Pie and Spike still narrate from above.

Catching up to Applejack, the two use the environment of the White Tail Woods to their advantage, from branches to bees to tree syrup. Along the way, Rainbow Dash flips an arrow sign, which points Applejack to a dead-end up a nearby mountain. All the racers after Applejack continue on the original path and run past Rainbow Dash while she leans on the sign laughing. When Twilight stops by, she mentions that all the other racers just ran past her. Dash runs off to get back in the race. Meanwhile, Applejack reaches the mountain summit and realizes Dash tricked her. Pinkie Pie offers her a lift in the Twinkling Balloon.

As they approach the home stretch, Applejack and Rainbow fight harder than ever before to finish first. When the finish line is in sight, they start deliberately bumping into each other sideways. In the resulting tussle, Applejack accidentally unties Rainbow Dash's ropes, allowing her to break her promise at the last second and fly. Applejack intercepts her and they fight all the way to the finishing line. They start arguing about who finished first, but to their shock, their constant clash and mutual obstruction had caused them to fall behind and tie for the last place. Even Twilight got fifth place, and she explains that she followed the advice from her books and paced herself throughout the race, before going all-out when most of the racers were worn out. Twilight says this is a good result for a first-time racer.

As Rainbow Dash and Applejack feel sorry for their own embarrassingly poor sportsmanship, Princess Celestia steps forward. The Princess was watching the entire event as fall is one of her favorite seasons. She forgives them, saying that anybody can get swept up in the competitive spirit. She points out that the two missed some of the leaf-laden trees. Realizing that friendship is more important than any competition, the two last-place racers run off together to finish off the rest of the trees.

Rainbow Dash: Looks like this Pegasus can pitch better than the workhorse!

Applejack: You're a mighty good athlete... I'm just better.
Rainbow Dash: All right, Applejack, you think you're the top athlete in all of Ponyville?
Applejack: Well, I was gonna say in all of Equestria, but that might be gildin' the lily.

Pinkie Pie: Welcome to the official coverage of the Running of the Leaves! You know, Spike, despite its name, the leaves don't do any of the actual running. No, that's left to my little ponies.
Spike: Why... yes, Pinkie! It's the running of the ponies that causes the leaves to fall.
Pinkie Pie: Urgh... Those lazy, lazy leaves.

Spike: You know Pinkie, these two ponies have a bit of a grudge match they're trying to settle, trying to prove who's the most athletic.
Pinkie Pie: Yes, and "grudge" rhymes with "fudge".
Spike: Yes it... does? What?
Pinkie Pie: And I like fudge, but if I eat too much fudge I get a pudge and then I can't budge.
Spike: So, no fudge?
Pinkie Pie: No thanks, I had a big breakfast.

Applejack: Not so easy without wings, is it?
Rainbow Dash: Come on, Rainbow. Show 'em a little "dash"!

Spike: I don't believe it! After a huge setback, Applejack is back at the front of the pack!
Pinkie Pie: She's the head of the pack, all right. The pick of the litter! The CAT'S PAJAMAS! Oh, wait! Why would Applejack take some poor kitty's PJs? That's not very sporting of her.
Spike: Oookay... Let's get back to the race.

Twilight Sparkle: Remember, Rainbow. This is just a game.
Rainbow Dash: Yes. But the rules have changed. And two can play at that game.

Spike: And Spike. Looks like Rainbow is doing her best to catch up.
Pinkie Pie: I'm not sure how ketchup is going to help at this contest. Now, in a hot dog eating contest it can make them dogs nice and slippery. But personally, I prefer mustard. How about you, Spike?
Spike: Uh... I like... pickles?
Pinkie Pie: Aaand it looks like Applejack has found herself in quite a 'pickle' as Rainbow overtakes her.

Twilight Sparkle: Forgive me, girls. I know I'm not an athlete, but shouldn't the Running of the Leaves actually involve running?
Rainbow Dash: You know, I think Twilight's right.
Applejack: You do?
Rainbow Dash: Yeah! If you wanna beat me, you better... RUUUN!

Rainbow Dash: I don't believe it. Twilight beat us!
Twilight Sparkle: Well, with all your horsing around it was quite easy. 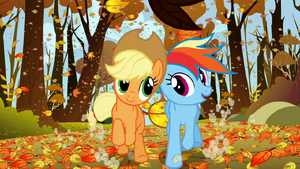