My Little Pony Friendship is Magic Wiki
Register
Don't have an account?
Sign In
Advertisement
in: Pages that need improvement, Season 7 episodes
English

View source
watch 00:14
"Fame and Misfortune" - 'My Little Pony' Episode Preview
Do you like this video?
Play Sound

Fame and Misfortune is the fourteenth episode of season seven of My Little Pony Friendship is Magic and the one hundred and fifty-seventh overall.

When Twilight Sparkle publishes her and her friends' friendship journal, it has unintended consequences when ponies start to argue over who wrote the best lessons.

According to Miller, S07E14 Unnamed Unicorn Stallion #1 was inserted into the episode as part of a fan's request through the Make-A-Wish Foundation,[2] the third after Stellar Eclipse and Angel Wings.[3][4]

This episode was initially scheduled to premiere on Canada's Treehouse TV channel on June 3, 2017,[5] but was later replaced with a repeat of A Flurry of Emotions.

In response to the fan backlash this episode received, M. A. Larson revealed at BronyCAN 2017 that even he, himself, was not exactly enthused about the premise of this episode.[6]

The scene when the fans start swarming Fluttershy asking her why she's learning the same friendship lesson repeatedly reappears in Memnagerie.

While walking through Ponyville, Princess Twilight Sparkle gets caught in an argument between two friends-turned-enemies: Toola Roola and Coconut Cream. After putting an end to their ice cream and cupcake-flinging, Twilight helps them make amends, concluding with the lesson that "friendship isn't always easy, but there's no doubt it's worth fighting for". As Toola Roola and Coconut Cream make up, Twilight realizes her own lesson sounds familiar.

Returning to the Castle of Friendship, Twilight finds her and her friends' old friendship journal gathering dust on a bookshelf and shows it to Starlight Glimmer. She remembers the lesson she just gave to Toola Roola and Coconut Cream was the same lesson she herself learned when they first fought Discord. However, the journal has become old and worn due to its recent disuse.

Twilight and Starlight gather the rest of their friends in the castle throne room and show them the worn-out friendship journal. After Rainbow Dash comments on the journal's disorganized and at times hard-to-read contents, Starlight uses her magic to create fresh, crisp copies of the journal for each of the Mane Six. As the ponies reminisce about the many lessons they've learned together, Twilight comes up with the idea of making the journal available for everyone in Equestria to read so that they can also benefit from the lessons within. The other ponies are in full support of this idea.

Through Twilight's efforts, the journal is published and distributed to bookstores and newspaper stands in Cloudsdale, Canterlot, and Manehattan. As Twilight hands out copies of the journal to foals outside the Ponyville Schoolhouse, she overhears Toola Roola and Coconut Cream arguing again, and she encourages them to read some lessons in the journal for advice.

With the popularity that the journal is bringing them, the Cutie Mark Crusaders have even more applicants for their upcoming cutie mark summer camp. While Twilight is pleased that her and her friends' lessons are reaching so many ponies, she is discouraged by how the lessons are being applied and hopes that ponies are actually learning from them.

The wrong type of fans

While walking through town, Twilight and Starlight meet a group of fanatical ponies from Fillydelphia who ask Twilight to autograph their journal copies. When Twilight asks what their favorite lesson was, the ponies admit they haven't actually read the journal and plan to keep their copies as mere collector's items. Elsewhere in town, two ponies sitting at a cafe table comment on the journal's illumination into the Mane Six's lives but also remark that they wish Rarity's sections were excluded. Rarity, sitting just a few feet away from them, is heartbroken and runs off in tears.

Twilight chases after Rarity to console her, but she is intercepted by Pinkie Pie, whose lessons have also brought her "giggly feedback". Pinkie is pleased that so many ponies think she's funny, but when they laugh at every single thing she says, it becomes unnerving. Meanwhile, Rainbow Dash is harassed and followed around by little fillies—they ask her about the exploits she's written about while ignoring the lessons that the rest of the Mane Six wrote.

Elsewhere, a group of journal readers accost Fluttershy, claiming that she "keeps learning the same thing over and over again", and accuse her of not being assertive enough. Before Twilight and Starlight can stand up for her, Fluttershy stands up for herself, arguing to the ponies that her journey to assertiveness was a slow one, not an instant one.

"It feels like everypony in Equestria is missing the 'friendship' part of the friendship journals."
— Twilight Sparkle

Twilight and Starlight go to Carousel Boutique, where Rarity has taken to "stress sewing" as a way to work through her despair. Because of the negative reception of Rarity's lessons in the friendship journal, multiple ponies have cancelled their orders from her and are even boycotting her fashion designs.

Conversely, Applejack has become immensely popular because of her lessons, and dozens of ponies have flocked to Sweet Apple Acres to become members of the Apple family, calling themselves the "Sweet Apple Admirers". Unfortunately, this popularity has caused Applejack, Apple Bloom, Big McIntosh, and Granny Smith to run themselves ragged trying to provide them all with food and cider.

Twilight returns to the castle and confides in Starlight Glimmer, regretting ever publishing the journal in the first place. Starlight assures her that it isn't her fault, but Twilight is convinced that it is and that she's made her friends' lives miserable. The rest of the Mane Six soon arrive at the castle seeking refuge from both their overbearing fans and mudslinging critics. Twilight is even more convinced that this situation is her fault for publishing the journal, but Starlight says it's everyone else's fault for focusing on the wrong aspects of her friends' lessons. This gives Starlight an idea, and she teleports away.

Twilight goes outside to try and calming the arguing ponies down. When asked by a reporter for the Canterlot Chronicle why she moved to Ponyville, she says it was to learn about friendship, which is why the friendship journal even exists. However, the reporter argues that Twilight's "character" would have been more interesting if she stayed in Canterlot. This comment annoys Twilight, who argues that she and her friends are real ponies, not characters in a book.

As the ponies continue to argue, Twilight and her friends interrupt with a song, singing that they are not flawless but their flaws make them special and their friendship possible. Unfortunately, this does nothing to appease the ponies, and they immediately go back to arguing.

When the Mane Six go back inside the castle, Starlight Glimmer returns with Toola Roola and Coconut Cream. The two fillies express their utmost gratitude to the ponies; after reading their lessons in the journal, their friendship is stronger than ever. Twilight and her friends are very pleased to know that someone learned from the lessons they published, and they come to the conclusion that "fads come and go, friendship is forever". When Applejack wonders what they're going to do about the ponies arguing outside, Twilight says they can wait a little longer and suggests enjoying the moment.

Twilight Sparkle: ...So you see, friendship isn't always easy, but there's no doubt, it's worth fighting for.
Coconut Cream and Toola Roola: Awww! [laughing]
Twilight Sparkle: Hmmm. That sounds familiar.

Twilight Sparkle: This is the friendship journal my friends and I used to keep. It's filled with all the things we've learned, like: "Friendship isn't always easy, but there's no doubt, it's worth fighting for."

Rainbow Dash: I-I don't even know what this is.
Rarity: It is called calligraphy, darling. If you're going to make words, at least make them fabulous.

Apple Bloom: We were thinkin' of puttin' together a cutie mark summer camp. Now, everypony's definitely gonna sign up for it!

Twilight Sparkle: So, what did you think of the lessons?
Out of Town Pony: Oh, we haven't read them. These are keepsakes. We gotta keep them in mint condition.

"Lemon Chiffon": We wanna know why Fluttershy keeps learning the same thing over and over again! Be assertive already!

Fluttershy: Listen up! I am more assertive! And yes, it took me a while to get there. But can you honestly say that you could learn something one time and completely change who you are? [beat] I didn't think so.

Reporter Pony: I read this journal cover to cover, and I have to say your character would have been much more interesting if she'd stayed in Canterlot.
Twilight Sparkle: My character?! We are real ponies! This journal is a record of things that actually happened to us!

Pearly Stitch: Twilight was better before she got wings!
"Lemon Chiffon": Fluttershy is just so painfully shy, it's hard to relate! I mean, come on!

Toola Roola: We just wanted to say thank you. To all of you.
Coconut Cream: Yeah, our friendship? Well, we were having trouble until we read your journal. It showed us that friends can go through all sorts of tough times and come through stronger than before.
Toola Roola: It's made us better friends than we've ever been!
Twilight Sparkle: Really?
Coconut Cream and Toola Roola: Mm-hmm.

Applejack: Reckon we still have to deal with them, don't we?
[loud arguing]
Twilight Sparkle: Stay in the friendship moment, Applejack. They can wait a little longer. 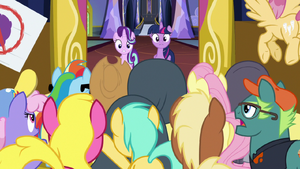