Fancy Pants, or Fancypants, is a male unicorn of Canterlot high society who is introduced in the episode Sweet and Elite. Rarity describes him as the most important pony in Canterlot. His entourage frequently change their opinions to agree with his own.

Fancy Pants first appears in Sweet and Elite when Rarity bumps into him and Fleur de Lis while walking through the streets of Canterlot. She instantly recognizes him as "the most important pony in Canterlot" and apologizes for running into him. He takes an interest in her when she mentions she is staying at Canterlot Castle by an invitation from Princess Celestia, and invites her to his private box at the upcoming Wonderbolts Derby. He becomes more interested in Rarity after she correctly predicts the winner of the derby, and insists that she must be extremely important after she lies about knowing the trainer of the Wonderbolts, which she claims is Rainbow Dash.

He is featured in Rarity's song montage, as well as in many of the social events. He also appears in a flying yacht, wearing a captain's uniform.

Later on, Fancy Pants greets Rarity at a garden party next to the room where Twilight Sparkle's birthday party is taking place. Rarity's friends crash the event when Twilight "realizes" that Rarity wants to attend it, and subsequently offend many of the upper class ponies with their raucous partying. While Twilight is dancing to music, Fancy Pants stops her to ask about the dress she is wearing, which Rarity had made but never finished. Twilight announces that Rarity is the designer, and Fancy Pants is again impressed with her. He comments that "every mare in Canterlot will be wanting one," showing his influence when other ponies accordingly begin to say that they would like similar dresses.

He is seen with Rarity at the end of A Canterlot Wedding - Part 2.

Fancy Pants makes a cameo appearance in Too Many Pinkie Pies with two Pinkie Pie clones appearing out of his hat.

Fancy Pants makes a cameo appearance on a boat in Rarity Takes Manehattan during the song Generosity and later on at the fashion show. Both times, he is with Fleur de Lis. He is seen sitting between Fleur de Lis and Mayor Mare in the stadium of the Equestria Games in the episode of the same name.

Fancy Pants appears as a host representative of Canterlot for the Grand Equestria Pony Summit in the episode Princess Spike. He attempts to get special privileges for the event from Twilight Sparkle, but Spike—acting on Twilight's behalf—declines his request. When Spike's decisions cause a chain reaction of disasters around Canterlot, Fancy Pants leads a mob of ponies to confront Twilight over her apparent mistakes. After Spike claims responsibility for the mess and apologizes for his actions, Fancy Pants and the other delegates forgive him by helping him reassemble a gemstone statue representing each city from Equestria. He also makes a background appearance with Fleur de Lis in Amending Fences.

Fancy Pants appears in Ponyville during Crusaders of the Lost Mark, walking with Fleur de Lis while Spoiled Rich waves at them.

In The Mane Attraction, an orchestra conductor in silhouette bears a strong resemblance to Fancy Pants.

Fancy Pants appears outside of Canterlot Carousel along with Fleur in Forever Filly, and he watches Princess Luna's royal carriage roll through Canterlot in A Royal Problem.

In Horse Play, Fancy Pants appears in the audience of Twilight's play, sitting next to Fleur de Lis.

In The Beginning of the End - Part 2, Fancy Pants appears among Sombra's mind-controlled army of ponies. In The Point of No Return, he appears walking on a bridge as Twilight and Spike walk to Dusty Pages's old house.

In Between Dark and Dawn, he and his fellow committee members offer to assist the Mane Six (who are handling Celestia and Luna's duties while they're away) with the "Royal Swanifying" ceremony, only to be refused. Offended, Fancy Pants leaves, but returns to criticize the Mane Six's efforts, and to point out that other matters in Canterlot need to be dealt with. After pointing out that the Royal Sisters regularly delegate their responsibilities, Fancy Pants convinces Twilight to accept his aid.

Fancy Pants is mentioned by Rarity in Growing Up is Hard to Do, saying that she is delivering a new design for him for his Monocle and Top Hat Appreciation Soiree. In The Ending of the End - Part 2, Fancy Pants takes shelter with Fleur de Lis and other unicorns inside the School for Gifted Unicorns as Canterlot closes itself off from the other pony races. In The Last Problem, Fancy Pants briefly appears in Rarity's group shot during The Magic of Friendship Grows.

Fancy Pants' appearance in Made in Manehattan on the yacht during Generosity reappears in A-Dressing Memories.

At the end of My Little Pony: Friendship is Magic Issue #12, he appears in PTV.

He appears again in My Little Pony Micro-Series Issue #10 at a Canterlot tea party. He engages Princess Luna in a game of chess, using real ponies as the chess pieces.

In My Little Pony: Friendship is Magic Issue #60, Rarity informs the Cutie Mark Crusaders that Fancy Pants' niece, Gilded Lily will be joining their Cutie Mark Day Camp. Fancy Pants unwittingly places pressure on his niece to find her talent (preferring it to revolve around being "important and influential" like the rest of the family). When Gilded Lily later reveals that her talent is in astronomy, Fancy Pants takes it in stride, assuring her that she will still make the family proud in her own way.

Fancy Pants appears in a photograph in All About Alicorns, and in Land of Harmony.

Fancy Pants appears in a Signature My Little Pony magazine issue 41 comic​[​specify​]​ with a speaking role.

Fancy Pants appears in the European magazine​[​specify​]​ comic Trixie never gives up! with a speaking role during the story about young Trixie.

In the Signature My Little Pony magazine issue 69 comic Daring friends and the missing story!, Fancy Pants appears at the Canterlot Magic Fair.[3]

Fancy Pants is a characters in Gameloft's mobile game, and serves as a boss during the "Rarity's Retro Revolution" and "The Crowning Achievement" events. His bio states, "According to Rarity, Fancypants is THE most important pony in Canterlot, and he can often be found with a readily agreeable entourage."

Fancy Pants appears in one of the promotional computer wallpapers for the My Little Pony Royal Wedding, in the same shot that was used for the episode.

FANCYPANTS is a high-society Unicorn who is fascinated with lower-class ponies, who he treats as novelties, though he claims no ill will toward them.

Fancy Pants appears in the Pony Life episode Bad Thing No. 3, in which he invites Rarity for a walk in the park and turns out to be very vain.

A mini-figure toy of Fancy Pants has been leaked.

Fancy Pants is typically cool and well-composed. When Rarity meets him by accidentally slamming into him, he plays off the encounter with a joke. His interest is piqued by her association with Princess Celestia and good taste. At the Wonderbolts Derby, he is impressed with Rarity's charm, skill, and connections when she correctly predicts the winner and claims to personally know the Wonderbolts' trainer, declaring her his new favorite party guest.

Fancy Pants also expresses an interest in Rarity's simple, half-finished, but well-executed dress that Twilight wears to the Canterlot Garden Party, even before learning that Rarity made it. In addition, he finds the rest of Rarity's friends to be "charmingly rustic," even though Jet Set and Upper Crust initially dismiss them.

In Princess Spike, he displays a pride in Canterlot and magnanimity when his request for special privileges during the Grand Equestria Pony Summit is refused. When it appears that Twilight made a series of terrible summit decisions, Fancy Pants becomes angry out of a desire to maintain Canterlot's reputation.

In the Enterplay collectible card game's expansion set The Crystal Games, cards #63 C and #ƒ26 of Fancy Pants mention that he is "a kind, caring friend who helps to encourage ponies to be the best they can be."

In the magazine comic Trixie never gives up!, during the story of how Trixie got her cutie mark, Fancy Pants ridicules filly Trixie.

"You are obviously somepony worth bumping into."
— Sweet and Elite

"I say, what is that scent you're wearing? It smells like.... Is that cake frosting?"
— Sweet and Elite

"In a moment, my dear. This lovely filly from Ponyville was just about to tell me who made her charming dress."
— Sweet and Elite

"I, for one, find them charmingly rustic."
— Sweet and Elite

"And I think the dress you made for your friend is lovely. Mmhm, I dare say every mare in Canterlot will be wanting one."
— Sweet and Elite

"Well, as host city, the Canterlot delegation feels it's only right that we should get passes to every meeting and party, yes?"
— Princess Spike

"Quite. Just like how all our cities make up the beautiful land of Equestria!"
— Princess Spike

Princess Luna: My rook at A1 takes your knight at A6! A foolish move to leave it so open, nicely coiffed citizen!
Fancy Pants: Ah! But now my rook may take yours, Princess! A8 to A6!
— My Little Pony Micro-Series Issue #10

"I just love the Wonderbolts Derby! They go so fast. It's very exciting. I'll be honest, though: I come for the hats and fashions more than anything. It's all about rubbing hooves with the highest of society and looking fabulous while doing it. Go, Wonderbolts!"
— The Wonderbolts Academy Handbook

"Wonderful to see you Twilight Sparkle! And you Spook."
— Signature My Little Pony magazine issue 41 comic​[​specify​]​

"You think it was a good show?! What amateurishness!"
— Trixie never gives up! page 6

"This place is for real artists!"
— Trixie never gives up! page 6 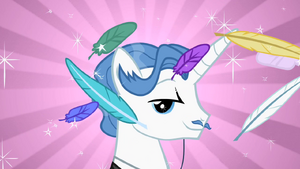