Swan Song, Golden Gavel, and Silver Frames are three ponies who first appear in Sweet and Elite. They are unnamed in the show, but they are named in merchandise, and Swan Song is also named in another depiction.

Swan Song, Golden Gavel, and Silver Frames first appear in the season two episode Sweet and Elite. Swan Song and Silver Frames are seen together at the beginning of the episode, during which Swan Song is concurrently seen as a hatless Earth pony talking to "Ponet"; Golden Gavel joins later, and the three plus Sea Swirl appear with Fancy Pants at the Wonderbolts Derby.

As Rarity's high-society popularity grows, Swan Song, Golden Gavel, and Silver Frames invite her to various social gatherings in Canterlot, including an art gallery opening, a charity auction, and Swan Song's dinner party. At one point during Becoming Popular (The Pony Everypony Should Know), Swan Song's unicorn horn sticks through her hat. The three also appear several times at the Canterlot garden party.

In Princess Twilight Sparkle - Part 1, Swan Song, Golden Gavel, and Silver Frames appear in Canterlot when the sun and moon are frozen in the sky. In Rarity Takes Manehattan, Swan Song and Golden Gavel appear in line to see Hinny of the Hills. In Pinkie Pride, Silver Frames appears hatless during The Super Duper Party Pony, in which Cheese Sandwich covers her in pie filling and streamers.

In The Maud Couple, Swan Song appears on a romantic boat ride with Royal Pin.

In The Beginning of the End - Part 1, Silver Frames briefly appears next to Eclair Crème in an opening shot of Canterlot.

In My Little Pony Micro-Series Issue #4, Swan Song's hat appears on page 11 and Golden Gavel appears on pages 13–14, 16, and 20-21. Among other high-society Canterlot ponies and art critic Praiser Pan, they attend the art contest and critique Fluttershy's piece.

In My Little Pony: Friends Forever Issue #7, Golden Gavel appears on page 14, once again in the company of Fancy Pants and other members of the Canterlot social elite.

In the Signature My Little Pony magazine issue 69 comic Daring friends and the missing story!, Golden Gavel and Silver Frames appear at the Canterlot Magic Fair.[3]

Swan Song is a character in Gameloft's mobile game, added in the game's version 2.0 update on October 6, 2014, and serves as a boss battle helper during the "Rarity's Retro Revolution" event. Her in-game description states "Swan Song is a divine friend of Fancy Pants! Any pony would be lucky to be invited to one of her prestigious dinner parties."

Swan Song, Golden Gavel, and Silver Frames were first named in the Enterplay collectible card game's expansion set Canterlot Nights. Card #52 C of Swan Song identifies her as a unicorn and gives her the description "Swan Song's polite dinner parties are the talk of Canterlot's elite, but when she's at a real party she lets it all hang out!" Card #72 F of Golden Gavel gives him the description "Golden Gavel's friends tend to just ignore him when he's in 'auctioneer mode.' Sometimes there's just no stopping him." Card #81 C of Silver Frames lists the quote "Many of this generation's great artists started their career in my gallery. Why, even Rarity has given it her personal approval!"

"And who is this Rainbow Dash?"
— Silver Frames, Sweet and Elite

Swan Song, Silver Frames, and Golden Gavel: [laughter]
Silver Frames: Oh, you are a delight, Rarity. An absolute delight. You simply must attend my art gallery opening this evening.
— Sweet and Elite

"And, of course, there's a seat for you at my dinner party tomorrow night."
— Swan Song, Sweet and Elite

Silver Frames: Oh, but, Rarity, I may as well close down the whole gallery if you can't attend!
Golden Gavel: My auction is for charity, dear. For charity!
Swan Song: And my dinner party will be a disaster if you don't come.
— Sweet and Elite

"Many of this generation's great artists started their career in my gallery. Why, even Rarity has given it her personal approval!"
— Enterplay collectible card game Canterlot Nights #81 C card of Silver Frames 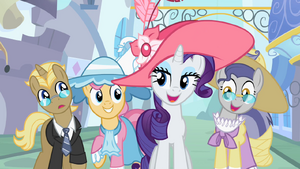 Retrieved from "https://mlp.fandom.com/wiki/Fancy_Pants%27_entourage?oldid=2142650"
Community content is available under CC-BY-SA unless otherwise noted.