Fast Clip and Whiplash are two male Pegasus ponies who first appear in Wonderbolts Academy as Spitfire's fellow academy drill instructors. They are unnamed in the show, but they are named in merchandise and other depictions.

Fast Clip and Whiplash first appear in the season three episode Wonderbolts Academy as Wonderbolt Academy staff members that follow Spitfire throughout the episode. They oversee training sessions for the academy cadets along with Spitfire and stand guard in her office. Whiplash operates the Dizzitron during the cadets' spin-out recovery training and keeps score during their cloud-busting training. At the end of the episode, Fast Clip and Whiplash escort Lightning Dust away when she is stripped of her lead pony badge.

Fast Clip is a playable character in Gameloft's mobile game, added in version 3.0. His in-game description states, "This Wonderbolt officer is true to his name! His 100-yard dash puts all others to shame!"

In the Canterlot Nights expansion set of Enterplay's collectible card game, Fast Clip is named on card #34 R, which gives him the description "Spitfire depends on Fast Clip to keep Wonderbolt Academy training right on schedule."

In The Wonderbolts Academy Handbook, Fast Clip and Whiplash are named on pages 30 and 31 respectively. Fast Clip's description on page 30 states, "We all rely on Fast Clip to make sure training days run smoothly and efficiently. As a drill instructor, he doesn't waste any time getting down to business. It's all about training hard and staying in line. There's zero time for horseplay when Fast Clip is running the show." Whiplash's description on page 31 states, "Whiplash is one of the toughest instructors at the Academy. He tests ponies backward and forward, so they better know their stuff! He grades hard, too. There's no extra credit in Whiplash's world. Despite being a pony of few words, his image as a hoof-buster is mostly a legend. When he isn't putting cadets in their places, he's just a big softie." 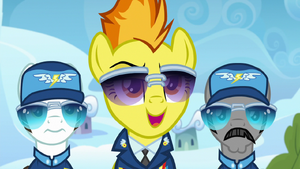 Retrieved from "https://mlp.fandom.com/wiki/Fast_Clip_and_Whiplash?oldid=1954816"
Community content is available under CC-BY-SA unless otherwise noted.