Father Knows Beast is the twenty-fourth episode of season eight of My Little Pony Friendship is Magic and the one hundred and ninety-third overall. The title, based on Father Knows Best, was earlier used for Filmation's Ghostbusters episode 60.

When a strange dragon crash-lands in Ponyville and claims to be Spike's father, Spike is willing to do anything for his "dad" to learn how to be a "real" dragon.

A brief clip of this episode was shown at the 2018 San Diego Comic-Con.

The final scene reappears in Memories and More.

The episode begins outside the Castle of Friendship, where Spike practices more complicated flying maneuvers with Twilight Sparkle's guidance. However, much like Twilight's first attempts at advanced flying, Spike's attempts are clumsy and unbalanced, causing him to frequently crash. When he wonders why Twilight's flying advice is not working, the observing Smolder says it is because Twilight is teaching him to fly like a pony, not a dragon.

Under Smolder's instruction, Spike learns to fly more skillfully and gracefully. Spike thanks Smolder for her help, and Smolder comments that her tips are beginner's techniques that young dragons are usually taught by their parents. Later, Twilight approaches Spike in his bedroom and wonders if his being raised by ponies instead of dragons has negatively affected his development. However, Spike is preoccupied with making a "thank-you" pillow for Smolder as thanks for her flying lessons.

Spike gives Smolder the throw pillow he made for her, but Smolder is puzzled by the gift because dragons do not typically use pillows. All of a sudden, something plummets out of the sky and crashes into the ground near them. When the smoke clears, it is revealed to be a portly adult dragon with lime green scales named Sludge. As a result of his crash in Ponyville, Sludge suffers a broken arm and sprained wings.

Sludge dismisses Spike and Smolder at first for being much younger, but upon seeing his difficulty walking and flying, Spike helps him back to Twilight's castle. The Mane Six meet Sludge in the castle throne room and offer to let him stay and recover until he gets back on his feet. Sludge initially refuses to accept help from ponies, but the Mane Six and Spike insist. They mend his broken arm, give him a comfortable room to sleep in, and assist in his physical rehabilitation, much of which he spends pigging out on food and gems.

After he makes a full recovery, Sludge thanks Twilight and her friends for all they have done for him. He comments how lucky Spike is to have such great friends, and Spike says ever since he was orphaned as an egg, they have become more than just his friends—they are his family. Sludge, pleased to see how much Spike has thrived in a non-dragon environment, confesses that his arrival in Ponyville was no accident. He reveals that he was specifically searching for Spike.

The Mane Six are shocked to learn that Sludge is Spike's father, and Spike is ecstatic to finally meet one of his birth parents. In the castle throne room, Spike asks Sludge why he was abandoned as an egg. Sludge explains that soon after Spike's mother laid his egg, she was tasked by Dragon Lord Torch to scout for the dragons' next Great Migration path. This would keep her away from the Dragon Lands for years, and feeling Spike deserved to know his mother, Sludge ventured out to search for her.

Sludge's search eventually brought him to the Land of Scale Collectors, a region of Equestria comprised of several floating island prisons and occupied by dragon hunters. When Sludge was caught, he turned himself over to the hunters instead of giving up Spike's egg, and he spent years in captivity not knowing what became of Spike or his mother. Despite Sludge's heartbreaking story, Spike says all that matters is that they are together again.

Spike has a long list of things he has always wanted to do with his father, and Sludge eagerly agrees to do them all with him if it would make him happy. The two play buckball, exchange Hearth's Warming presents, and bake cupcakes together. However, Sludge appears largely disinterested in the father-son activities and hogs all the cupcakes for himself.

How to be a real dragon

When Spike asks Sludge what he wants to do next, Sludge says he is fine with doing whatever Spike wants. He mentions, however, that if he were in Spike's living situation, he would spend all his time acting like a real dragon instead of a dragon raised by ponies. When Spike brings up these concerns with Twilight, Sludge corrects his insensitive remarks by saying he wishes he and Spike had more in common. At Twilight's suggestion, Sludge decides to show Spike some new ways to bring out his inner dragonhood.

Through the song Just Can't Be a Dragon Here, Sludge teaches Spike how to live like a dragon raised in the Dragon Lands, including getting rid of all his usual castle comforts, renouncing sugary pony-made foods, and even abandoning cleanliness and good hygiene. He also tells Spike to gather everything pony-related that he once enjoyed and give them to Sludge so that he won't be burdened by them. As Spike leaves to collect more "cushy pony stuff", Sludge makes himself comfortable in Spike's bedroom.

The next morning, Twilight finds Sludge sleeping in Spike's bed, and Spike arrives with more pony food for Sludge, having spent the previous night outdoors. Later, Twilight and her friends find Spike giving Sludge a pedicure in the castle throne room. Twilight starts to worry that Sludge is just taking advantage of Spike, but Spike is happy to do whatever his father asks for the sake of embracing his inner dragon. He also accuses Twilight of being jealous that he has a real parent now and doesn't need her anymore, breaking Twilight's heart.

Some time later, while skipping rocks in the pond, Smolder finds Spike sleeping outside the School of Friendship. He explains that he was sleeping outside like dragons typically do, but Smolder mentions how contradictory this is since she herself lives inside the school dorms. When Spike explains what Sludge is making him do, Smolder thinks Sludge is treating Spike like a servant instead of a son.

Later, Sludge finds Spike packing things up in his bedroom. Spike says that since Twilight doesn't approve of Sludge living in the castle, he and Sludge will move somewhere else, much to Sludge's dismay. Smolder then arrives, having found a very uncomfortable cave where Spike and Sludge can live together. Sludge starts to panic and says he still has much to teach Spike about being a real dragon, but Spike says Sludge has already taught him so much. As he and Spike fight over a pillow, Sludge confesses that he is not Spike's father and only pretended to be in order to live a life of castle luxury.

Spike is heartbroken by this deception, but Sludge argues that he simply did what any other dragon would have done in the same situation—a point of view that Smolder strongly disagrees with. As Sludge takes his leave, Smolder sympathizes with Spike's struggles of finding out who he really is. He approaches Twilight in the castle library, explains what happened with Sludge, and apologizes for snapping at her earlier. Twilight allows Spike to travel to the Dragon Lands more often to learn more about himself, but Spike says he already knows who his real family is.

"Besides, there's no way I'm living without pillows."
— Spike

Spike: I just don't understand why none of your advice is helping.
Smolder: Because she's teaching you to fly like a pony instead of a dragon.
Spike: What's the difference?
Smolder: Well, we don't have feathers, for starters.

Sludge: Hey there, young dragons. [coughs] Name's Sludge. How are yours tails shakin'?

Spike: You're hurt and need help. So I'm taking you to Twilight's castle whether you like it or not.
Sludge: Castle, eh? [groans]

Sludge: Dragons take care of themselves. I don't need help from a bunch of castle-livin' ponies.

Sludge: I have a confession to make. Coming to Ponyville wasn't an accident. I was looking for you. Spike... [sighs] I'm your father.
Mane Six: [gasp]
Pinkie Pie: [continues gasping] Sorry.

Spike: How did you know I was a boy?
Fluttershy: Whatever happened to Spike's mom?
Rainbow Dash: And how did the egg make it all the way back to Equestria by itself?
Pinkie Pie: Hmm?
Sludge: I wish I had all the answers. [crying]

Sludge: If I had a castle like this with all this stuff, I'd probably just lay around all day doing nothing like a real dragon.
Spike: Like a real dragon?
Sludge: Sure! I'm not surprised you don't know any better. Twilight basically raised you as a pony. You're barely a dragon at all.

Spike: [sighs] Isn't he the best?
Rarity: I'm not sure that's exactly the word I would use.
Sludge: Uh, Spike? The bath isn't gonna fill itself, son.
Spike: Be right there... Dad.

Spike: Maybe you just don't like that I have a real parent now.
Twilight Sparkle: That's not true! I'm glad Sludge is here. I-I just wish he wasn't such a—
Spike: Dragon? Of all ponies, I can't believe you would have a problem with that.

Smolder: Sludge just lays around while you wait on him claw and tail? Uh, dragons are rude and rebellious, but they aren't lazy lumps who take advantage of their kids.

Twilight Sparkle: I'm not surprised. There's no way a dragon like that was related to you. But if you still want to search for your real family, I'd understand if you spent more time in the Dragon Lands.
Spike: I don't think so. I already know who my real family is.
Twilight Sparkle: Aww! It's me, right? 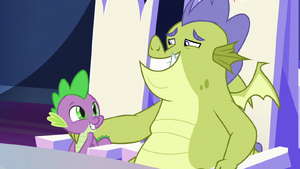