Feather Bangs is a male Earth pony who appears in the season seven episode Hard to Say Anything and the season nine episode The Last Crusade. He is a flirtatious singer with a romantic interest in Sugar Belle.

Feather Bangs resembles Cherry Gold, MandoPony, and Joe. He was designed by Kora Kosicka.[1] According to Feather's voice actor, Vincent Tong, the character was inspired by Justin Bieber.[2]

Feather Bangs first appears in the season seven episode Hard to Say Anything as a resident of Starlight Glimmer's old village. Throughout the episode, he makes romantic advances and gestures toward Sugar Belle, such as giving her flowers, being overtly flirtatious and chivalrous, and taking her on a carriage ride. This puts him at odds with Big McIntosh, who also has a crush on Sugar Belle and tries to impress her with the help of the Cutie Mark Crusaders. Feather Bangs' romantic efforts also attract the attention of three unnamed villager mares.

Feather Bangs and Big McIntosh's competition for Sugar Belle's affections reach a tipping point when Feather pits his contemporary pop music sounds against Big Mac's country ballad vocals. As they keep trying to one-up each other, they both eventually fail to impress Sugar Belle, and she chases them out of her ruined bakery.

Near the end of the episode, Feather Bangs tries one more time to impress Sugar Belle by singing loudly outside her house while holding a record player over his head. However, by this time, Sugar Belle has already picked Big McIntosh over him. When the Cutie Mark Crusaders suggest that Feather talk to the three mares who had been swooning over him during the episode, Feather reveals that, despite his overconfidence, he doesn't actually know how to talk to girls on a personal level. Therefore, the Crusaders offer to help him do so.

In season nine, Feather Bangs appears during the CMC Appreciation Day in The Last Crusade.

In the chapter book Beyond Equestria: Pinkie Pie Steps Up, Feather Bangs appears as one of eight nominees for the Glammy Awards alongside Sapphire Shores, Countess Coloratura, Songbird Serenade, and others.

Feather Bangs is a character in Gameloft's mobile game. He is a supporting character in the Hearts and Hooves 2018 quest, in which the Cutie Mark Crusaders help him fall in love with Blaze.

Throughout his appearance, Feather Bangs is portrayed as overconfident and suave. His physical appearance and demeanor are reminiscent of pop and hip-hop culture of the 1990's and early 2000's, punctuated by slang, frosted tips in his mane, and hair flips. However, the end of his debut episode reveals this attitude to be a facade to cover up his insecurities and nervousness.

"Hey, girl. Heh-heh. I was writin' poetry by the pond when I saw these flowers. I thought I'd show them how pretty you are."
— Hard to Say Anything

"These balls are like you. I'll always catch you if you fall."
— Hard to Say Anything

"Girl, you been workin' hard all day. Allow me to treat you like the princess... [chuckling] ...you are."
— Hard to Say Anything

"I can mane flip, write poetry, and juggle, but actually talkin' to a pony? Oh, it scares me almost as much as loneliness."
— Hard to Say Anything 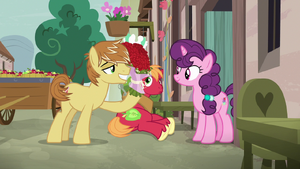 Retrieved from "https://mlp.fandom.com/wiki/Feather_Bangs?oldid=2132818"
Community content is available under CC-BY-SA unless otherwise noted.