Featherweight is a school-age Pegasus colt and a friend of the Cutie Mark Crusaders who appears in various episodes. He has brown mane color, a short brown tail, and a cream coat. His cutie mark is a feather. The name "Featherweight" refers to his gaunt stature and slight build. It is also taken from one of the lighter weight classes in amateur and professional boxing.

According to the writer M. A. Larson, Featherweight was originally called "Milquetoast", and he was the little brother of the previous Foal Free Press editor-in-chief Namby-Pamby.[1]

In Ponyville Confidential, Featherweight is revealed to have newly earned his cutie mark, a white feather. The Cutie Mark Crusaders are upset with this, wondering how he could get his cutie mark before they did.

Featherweight later shows up in the meeting for the staff of the Foal Free Press, the school's newspaper. He dashes out of the meeting to "document everything" as a photographer, after Diamond Tiara, who is the new Editor-in-chief for the school newspaper, orders him to do so. Later on, he helps Sweetie Belle and the other Cutie Mark Crusaders by taking a photo of Snips and Snails who managed to entangle themselves in gum and stick themselves to one another, which is later used in the school newspaper.

When "Gabby Gums", that is, the Cutie Mark Crusaders, say they are going to quit their job with the school newspaper, Diamond Tiara shows them embarrassing pictures of themselves in an attempt to blackmail them into continuing their job, taken by Featherweight in his efforts to "document everything." Featherweight, who had been watching the discussion through the window, smiles sheepishly and waves at the Crusaders.

Featherweight later becomes the Editor-in-chief of the Foal Free Press, after Diamond Tiara has her position revoked by Cheerilee because she had been abusing her power.

Featherweight also appears very briefly in Flight to the Finish, beside Rumble. He appears again a few times in Twilight Time, most notably when taking photographs of Twilight Sparkle and the Cutie Mark Crusaders.

Featherweight appears in Slice of Life having a mishap with a Ponyville Schoolhouse printing press and being covered by ink, eventually getting clean again when DJ Pon-3's mobile DJ station speeds past him later. He also appears briefly in Crusaders of the Lost Mark leaving the schoolhouse. In The One Where Pinkie Pie Knows, he has two speaking roles: one where he is requesting a balloon baby pony from Pinkie Pie, and another when he gives a copy of the Foal Free Press to Twilight Sparkle during Shining Armor's scavenger hunt.

Featherweight, along with the rest of the school ponies, meets Coloratura in The Mane Attraction.

He makes another appearance in The Cutie Re-Mark - Part 2, during Friends Are Always There For You.

Featherweight appears in A Hearth's Warming Tail, seen in the story within the story as an urchin child on a crutch (referencing the character of Tiny Tim from A Christmas Carol). He tap-dances with Pinkie for a few moments during Pinkie's Present.

In Forever Filly and Marks and Recreation, a picture of Featherweight appears on a wall in the Crusaders' clubhouse alongside pictures of other ponies whose cutie mark problems they helped with.

In Marks for Effort, Featherweight is among the foals and fillies heading out of Miss Cheerilee's class once the school bell rings.

In The Last Crusade, Featherweight appears at Cutie Mark Crusaders Appreciation Day. In The Ending of the End - Part 2, he takes shelter with other Pegasi in Cloudsdale as the city closes itself off from the other pony races. In The Last Problem, Featherweight briefly appears in Rainbow Dash's group shot during The Magic of Friendship Grows.

Featherweight appears in chapters 2 and 6 of Ponyville Mysteries: The Tail of the Timberwolf.

This school-age colt is the editor and photographer of Ponyville's school paper.

PIP SQUEAK, or "Pip" to his friends, is an Earth Pony from Trottingham, while FEATHERWEIGHT is a Pegasus pony as well as the editor in chief of the Foal Free Press newspaper.

FEATHERWEIGHT is editor in chief of the Foal Free Press newspaper and a staunch investigative reporter (in his own mind). Need a copy of the paper? He's got a million. No, seriously—please take one.

"Uh, a baby pony, please! Uh, unless of course that would be a royal pain..."
— The One Where Pinkie Pie Knows

"Uh, maybe you'd better just make me a giraffe."
— The One Where Pinkie Pie Knows

"Extra, extra! Get your Ponyville news! Read it in the paper! Extra, extra!"
— The One Where Pinkie Pie Knows 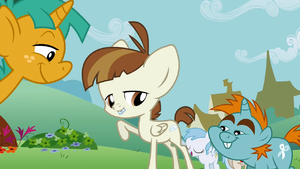