Start a Wiki
Felix, or Lucky Streak, is a male background Earth pony with a bluish gray coat, dark gray mane and tail, gold eyes, and a cutie mark of three four-leaf clovers. He is unnamed in the show, but he is named "Felix" with a trademark symbol and "Lucky Streak" in merchandise.

Felix first appears as a Pegasus pony in Sonic Rainboom, working at the Cloudsdale weather factory. He later makes brief appearances on the way to and at the Grand Galloping Gala in The Best Night Ever.

In Putting Your Hoof Down, Felix appears at the Ponyville marketplace with Sweetie Drops. In For Whom the Sweetie Belle Toils, he appears - with blue eyes - attending the Cutie Mark Crusaders' play. In Trade Ya!, Felix appears briefly at the Rainbow Falls Traders Exchange, again with blue eyes.

"Oh yes, I am very malicious! I lack empathy for my fellow pony. I once tied a pony's horseshoes togeth—

"Luck is 1% good fortune and 99% serendipity. Or is it the other way around?"
— Enterplay collectible card game Gen Con Indy 2013 demo card of Felix and α #41 R card of Lucky Streak 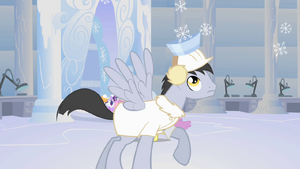 Retrieved from "https://mlp.fandom.com/wiki/Felix?oldid=2030992"
Community content is available under CC-BY-SA unless otherwise noted.