Fiddly Twang, or Fiddly Faddle, is a female background Earth pony who first appears in the season two episode Luna Eclipsed. She has a yellow coat, a cobalt blue mane and tail, arctic blue eyes, and a cutie mark of a blue treble clef. She is unnamed in the show, but she is named in merchandise and other media.

Fiddly Twang shares her design and cutie mark with Octavia Melody and her design with "Spring Harvest". Unlike Octavia, Fiddly Twang always appears wearing clothes, and her cutie mark and usually eyes are blue instead of purple.

Fiddly Twang first appears in Luna Eclipsed as the fiddle player in a four-part bluegrass band consisting of herself, banjo player "Kazooie", pianist "Ragtime", and harmonica player "Pitch Perfect". For Ponyville's Nightmare Night festival, she dresses up as a scarecrow. When Twilight Sparkle and Princess Luna return from Fluttershy's Cottage to the festivities in town, Fiddly Twang opens her eyes.

In Apple Family Reunion, Fiddly Twang appears at the Apple family reunion playing fiddle for the song Raise This Barn. Here, she appears in a three-part band without "Ragtime".

Fiddly Twang is a character in Gameloft's mobile game.

In Enterplay's collectible card game, Fiddly Twang is named "Fiddly Faddle" on card α #68 R, which gives her the description "Ponyville hoedowns aren't complete without Fiddly Faddle and the Band bringing down the barn!"

Fiddly Twang appeared on Hasbro's former Pony Wedding microsite, with her eyes open. In the microsite's Wedding Quiz section, the quiz "Your dream wedding location!" included the question "What should be the music for the wedding?", with a three-part band consisting of Fiddly Twang, "Kazooie", and "Ragtime" as the choice that steered the quiz's result to Appleloosa.[1] 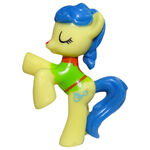 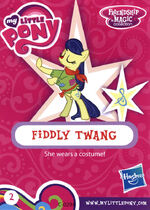 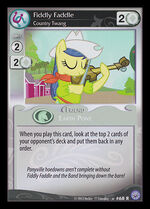