Music in the Treetops

The naturally happy place that is Fluttershy's cottage.

What a beautiful morning!

Flutters singing to the birds.

Is that a jackalope?

And some cheeses for you.

Is this MLP or "The Sound of Music"?

"Thank you so much."

AJ is so shocked, her hat is hanging in mid-air.

*MEEP*
Add a photo to this gallery

"Wow, I've never heard you sing a solo like that before!"

"With ice cream on top!"

Such amazing, untapped talent you have!

I cannot believe we didn't know about it until now!

You would make a welcome addition to Ponyville's Singing Team...

This simply must be rectified!

No, bad Pinkie! You're scaring Fluttershy!

"I'm one of their biggest fans."

Why does this surprise you, Pinkie?

"It's a terrible waste of an exquisite talent."

"But I understand that you're not comfortable." Also, adorable Rarity and AJ pic.

Rainbow Dash and two of the Cutie Mark Crusaders helping prepare the fundraiser.

"Let's run through that again!"

Rarity getting the performance started.

Well, this is awkward.

Fluttershy, why you so adorable?!

"Rarity, you were awesome!"

"Uh, thank you, Spike, but this is an ensemble."

"Eh, the rest of you were pretty good too."

An adorable moment between Fluttershy and Rarity.
Add a photo to this gallery

Two bunnies dressing up! How cute!

"We're the Pony Tones minus one tone."

Well, there you are!

"Haven't I told you about punctuality?"

That was an unpheasant turkey call. Plus, when Pinkie is competing, you know you've already lost.

"Quit your gabbin' and get on with the gobbin'!"

Pinkie doesn't seem to care about what's going on here. But then again, when is she ever truly in on the uptake?

"Well, we cannot perform tonight with only three voices."

"It would take rearranging all the music."

Does this shot remind you of anything?

"I'd do anything for the animals!"

No matter what you do, you can't make the fans sympathize with one of the most hated characters of the show.

"Mix it up!"
Add a photo to this gallery

Hey, Gummy, you gonna eat that?

"Something's in the air today."

Spike's enjoying the show, even though he can't see it!

So they are really in love!

Fluttershy's having fun with this!

Smiling cuteness at its finest.

Keeping the act up

"Fluttershy, you were on the wrong side of the curtain!"

Twist? What are you doing here?

"We got the Pony Tones!"

Ceiling Flutterbat is watching you.

How does nopony notice the voice coming from the barrel?

Singing at a higher octave

Nopony seemed to notice!
Add a photo to this gallery

Adorableness is off the charts.

Maybe this wasn't such a good idea.

Fluttershy spinning around and around.

Somepony's getting a little carried away.

Hey! Who turned out the spotlight?!

That is so not creepy.

Hey, Pinkie, why do you have Twilight's cutie mark?
Add a photo to this gallery

"I don't think anypony was jealous."

"...but it must have been horrible standing there on stage..."

"It's like you living your own personal worse nightmare!"

"What Pinkie meant to say is that you were really great!"

"You totally blew my mind!"

"Though, no offense... you kind of sounded like a dude."

You're not helping, Pinkie!

Well, thank you for your support.

Looks like Princess Twilight's flying has improved, to the point where she's emulating Rainbow Dash's habit of stationary flying.

Because I'm never singing in front of anypony ever again.

"Can we please stop running?!"

"And, for all her babbling, Pinkie Pie was right about one thing."

"Was it really that bad?"

"The praise for your fantastic singin'?"

Or possibly all of the above.

Can't you be a little more subtle, Pinkie?

...but she's still not ready for large crowds.

"I'll get there someday." 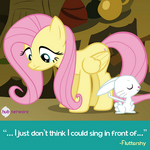 Why so sad, Fluttershy?

There's something wrong with Fluttershy's eye. 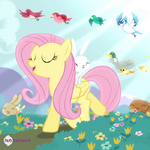 Walking with the animals.
Add a photo to this gallery
Retrieved from "https://mlp.fandom.com/wiki/Filli_Vanilli/Gallery?oldid=2187061"
Community content is available under CC-BY-SA unless otherwise noted.