My Little Pony Friendship is Magic Wiki
Register
Don't have an account?
Sign In
Advertisement
in: Foals, Supporting characters

The Filly Guides, also called the Filly Scouts,[1][2][3][4] are a youth organization in Equestria whose foal members appear in several episodes and comics. They are a parallel to the real-life Girl Guides and, to a lesser extent, the Boy Scouts of America organizations.

When asked about the Cutie Mark Crusaders' "girl scout" uniforms in My Little Pony: Friendship is Magic Issue #24 on the Round Stable forums, IDW comics artist Brenda Hickey replied, "that was in [Jeremy Whitley's] script. Since they had a girl scout design in the show, I just lifted that."[5]

Upon the release of the WeLoveFine T-shirt "Cookies?" in early February 2013, its design's (non-show) artist Rodney Vrede referred to "Tag-A-Long" (not by name) as one of the "filly scouts" on DeviantArt,[4] and during the premiere of 28 Pranks Later on August 13, 2016, Jim Miller referred to the Crusaders as "Filly Scouts" on Twitter,[3] predating My Little Pony: Ponyville Mysteries Issue #1.

In the season six episode 28 Pranks Later, Apple Bloom, Sweetie Belle, and Scootaloo appear as Filly Guides taking part in the organization's Cookie Drive. They go door-to-door selling boxes of cookies to the ponies of Ponyville.

In the season eight episode The End in Friend, Rainbow Dash says she learned how to judge the depth of a body of water at Scootaloo's Filly Guides camp.

In the season nine episode Between Dark and Dawn, Rainbow Dash leads the Cutie Mark Crusaders on a Filly Guides hike through the woods. When they get lost, Princess Celestia and Princess Luna appear to magically blast a path to their campsite.

In the Defenders of Equestria expansion set of Enterplay's collectible card game, card #19 C of the Filly Guides gives the description "Filly Guide Cookies haven't changed in generations. If somepony changed the traditional ingredients even a little, customers all over Equestria would probably lose their minds!" 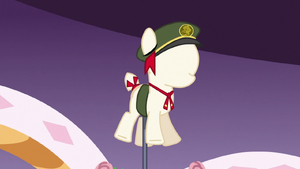