Fillydelphia is a metropolitan city in Equestria mentioned in several episodes and depicted in My Little Pony: Friends Forever Issue #14, My Little Pony: Friendship is Magic Issue #58 and Issue #65, Baby Flurry Heart's Heartfelt Scrapbook, and various merchandise. It is populated by both ponies and dragons. The name of the city is a play on Philadelphia, Pennsylvania; Fillydelphia's Dragon Town is similar to Philadelphia's Chinatown, and Equestria's map and Baby Flurry Heart's Heartfelt Scrapbook episode 8 each associate Fillydelphia with a bell like Philadelphia's Liberty Bell. Its name is spelled as "Fillydelphia" in A Royal Problem's credits, in Lauren Faust's show bible and online statements,[1][2] and in some merchandise, scripts, and closed captioning, as "Filly Delphia" in other merchandise and scripts, and as "Phillydelphia" in My Little Pony: Friends Forever Issue #18 and in other closed captioning.

According to series creator Lauren Faust, Ponyville was originally named Fillydelphia.[2] While this "didn't pan out", she was glad that the writing staff "got to use the name somewhere else."[1]

Fillydelphia's Dragon Town and its dragons in My Little Pony: Friends Forever Issue #14 were "closely vetted by the show in the script and art, and as a result some things were changed to bring it closer into line for what the show wants to do."[3] IDW Publishing "got some direction on how the Dragon part of town should look."[4] Artist design choice and what is explored in the series were combined.[5]

Fillydelphia is first mentioned in Swarm of the Century when Princess Celestia states that a parasprite infestation has overtaken the town.

In A Friend in Deed, Cranky Doodle Donkey mentions to Pinkie Pie that he got a decorative red ornament in Fillydelphia during his travels across Equestria. In It's About Time, Rainbow Dash says to Twilight Sparkle that her Pegasus team "gave the all clear from Fillydelphia to Las Pegasus." In Hurricane Fluttershy, Rainbow Dash mentions that Fillydelphia broke the tornado windspeed record the previous year with a top speed of nine hundred and ten wingpower.

In Apple Family Reunion, Fillydelphia is mentioned as one of the towns from which Apple family members have RSVP'd for the family reunion. In Games Ponies Play, Fillydelphia is chosen to host the Equestria Games in a flashback.

In Pinkie Pride and Twilight's Kingdom - Part 2, Fillydelphia is shown on a map of Equestria as in merchandise without being identified by name. In Testing Testing 1, 2, 3, Applejack mentions that Granny Smith discovered the first granny smith apple in Fillydelphia when she was a filly. In Inspiration Manifestation, Rarity mentions Fillydelphia as one of the potential cities to which to spread her "creative genius."

In A Royal Problem, the mayor of Fillydelphia appears at Canterlot Castle in a heated argument with the mayor of Baltimare.

In Fame and Misfortune, a group of ponies from Fillydelphia ask Twilight to sign their copies of the published Journal of Friendship.

In Daring Done?, Pinkie reads a newspaper article saying that Fillydelphia has been rid of parasprites.

In Once Upon a Zeppelin, Twilight mentions that Iron Will's zeppelin cruise passes Fillydelphia on its return trip.

In A Royal Problem's locked script, the mayor of Fillydelphia mentions that Fillydelphia is where Flash Prance "was born and raised".

In the first and eighth episodes.​[​specify​]​

In My Little Pony: Friends Forever Issue #13, the Fillydelphia Phracturers are one of the pony roller derby teams featured on pages 19 and 20. In Issue #14, Fillydelphia is physically featured for the first time when Spike and Princess Luna go to the city to investigate a series of mysterious fires. Like Manehattan, Fillydelphia is a mostly modernized city with cement roads and skyscrapers. It has an all-unicorn police force, and it is also home to a thriving population of dragons who live in a separate part of the city called Dragon Town. On Issue #18 page 10, Cirrus Cloud mentions that she manages weather in Fillydelphia (spelled here as "Phillydelphia").

In My Little Pony: Friendship is Magic Issue #58, Twilight, Fluttershy, Zecora, and Cattail travel to Fillydelphia following notes left by Mage Meadowbrook. In Issue #65, a disguised Celestia passes through Fillydelphia on her tour of Equestria.

In the chapter book Rarity and the Curious Case of Charity, Charity Sweetmint mentions that she is from Fillydelphia.

My Little Pony: The Manga - A Day in the Life of Equestria

In chapter 5 of Vol. 1, Flim and Flam mention a grapefruit festival taking place in Fillydelphia.

In Gameloft's mobile game, Fillydelphia is shown on the world map[6] and mentioned in Mina's bio.

In Discovery Family (previously the Hub Network)'s online game Equestrivia Challenge, Fillydelphia has been offered as an incorrect answer to multiple quiz questions.[7]

Fillydelphia is featured and mentioned in various merchandise and promotional material. On several versions of the official map of Equestria, Fillydelphia's name is spelled as "Filly Delphia" with a space or line break in the middle.

Fillydelphia is mentioned in a Hub advertisement and is listed in a Discovery Family (previously Hub) Facebook question.[8] 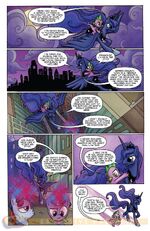 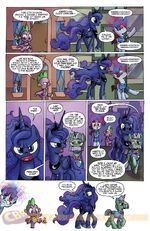 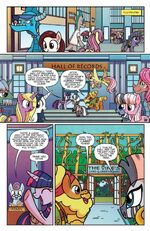 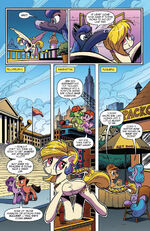