Filthy Rich is a male Earth pony and Diamond Tiara's father. He is introduced in the season two episode Family Appreciation Day. He is called Berry Rich in some merchandise. His names are based on the phrases filthy rich and very rich, meaning "very wealthy".

According to Granny Smith's tale in Family Appreciation Day, his grandfather, Stinkin' Rich, was one of the first ponies to buy Granny Smith's zap apple jam, and started a business by reselling it. In the same episode, it was told that this had helped contribute to the foundation of Ponyville.

In the same episode, Filthy Rich appears at Sweet Apple Acres to politely confirm he will receive the first one hundred jars of zap apple jam from Granny Smith, "as usual".  As they walk off-screen, Granny asks him how his father is doing. He is later seen giving a presentation about "Rich's Barnyard Bargains" to Apple Bloom's class that bores most of the class to sleep except for Twist and Diamond Tiara. He is again seen at the end of the episode sternly pushing a reluctant Diamond Tiara to Sweet Apple Acres to help other fillies sing to the water in the watering cans, part of Granny Smith's special process of making zap apple jam. Despite being a rich business pony and his daughter's mean spirit, Filthy is amicable to Apple Bloom, Granny Smith and everypony else.

When Granny Smith calls him by his first name, he explains that he prefers "Rich". Cheerilee initially calls him "Mr. Filthy"; after he looks chidingly at her she immediately corrects herself, and he regains his usual easy going and calm appearance.

In Pinkie Pride, Diamond Tiara refers to him in the song Pinkie the Party Planner.

Filthy Rich appears in Testing Testing 1, 2, 3 as Rainbow Dash depressingly flies over him as he buys a whole crate of apples from Big McIntosh.

Filthy Rich appears in Inspiration Manifestation next to his daughter Diamond Tiara at the fair.

In Slice of Life, Filthy Rich is among the ponies DJ Pon-3 and Octavia Melody crash into with a mobile DJ booth. He also appears at Cranky Doodle Donkey and Matilda's wedding.

In Do Princesses Dream of Magic Sheep?, Filthy Rich appears in Ponyville's shared dream offering money to the Tantabus in exchange for his safety. He later uses bits to assist Princess Luna in stopping the Tantabus from escaping into the real world.

In Crusaders of the Lost Mark, Filthy Rich makes a physical appearance during Light of Your Cutie Mark, alongside his wife, Spoiled Rich, where he appears to disapprove of Diamond Tiara's behavior. Later in the episode, Diamond Tiara has Spoiled Rich send a note to him, and he contributes enough money to help restore the school playground.

In On Your Marks, Filthy Rich briefly appears during a montage of the Cutie Mark Crusaders trying to find a pony with a cutie mark problem. In Where the Apple Lies, Filthy Rich appears in present day receiving a shipment of zap apple jam from Granny Smith and in flashback with his then-fiancée Spoiled Milk.

In It Isn't the Mane Thing About You, Filthy Rich appears alongside Diamond Tiara buying Mares Day flowers for his wife Spoiled Rich, at one point unable to decide which flowers to buy. He is later seen returning a large number of flowers, which had been rejected by Spoiled for not being purple. Rarity helps him by offering to give him some lavender arrangements of hers.

In The Ending of the End - Part 2, Filthy Rich takes shelter with Spoiled Rich, Diamond Tiara, and other Earth ponies as Ponyville closes itself off from the other pony races.

A younger Filthy Rich appears in a flashback of Where the Apple Lies in Harvesting Memories.

Filthy Rich's human counterpart appears in My Little Pony Equestria Girls: Legend of Everfree as a minor antagonist squaring off against Gloriosa Daisy. He threatens to tear down Camp Everfree and replace it with a spa. At the Crystal Fundraiser at the end of the film, he is seen scowling in defeat.

In the half-hour special Mirror Magic, Filthy Rich briefly appears at the Canterlot Mall with his daughter Diamond Tiara.

In My Little Pony Micro-Series Issue #3, Filthy Rich is mentioned, and a "Future Site of a new Barnyard Bargains" billboard featuring a waving image of him appears.

In My Little Pony: Friends Forever Issue #16, Filthy Rich hires Prancy Drew to help Diamond Tiara and Silver Spoon in the school scavenger hunt and later sees the Pony Pickers in concert with them.

In the Friendship is Magic Issue #30-31 story arc Ponyville Days, Filthy Rich and half of Ponyville quarrel against the other half over who the true town founder is.

In Don't You Forget About Us, Filthy Rich appears at the end of Friendship is Magic Issue #39.

In the Election story arc, Filthy Rich runs against Mayor Mare for mayor of Ponyville. He makes numerous decadent promises to the ponies such as a hoofball stadium and golf courses, and he wins the election at the end of Issue #46. However, after running a poor administration and making more promises that he can keep in Issue #47, he returns the mayorship to Mayor Mare.

In My Little Pony: Spirit of the Forest, Filthy Rich opens a lumber mill in White Tail Woods, causing the forest to lose a considerable number of trees and putting him in direct opposition with the Cutie Mark Crusaders.

Filthy Rich is a character in Gameloft's mobile game, and serves as a boss battle helper with a story role during the "Rarity's Retro Revolution" event. The game's description of him states, "The father of Diamond Tiara, Filthy Rich is a wealthy businesspony whose family contributed to the foundation of Ponyville."

A mini-figure toy and collector card of Berry Rich are included in the twenty-second wave of mystery packs. The collector card states about Berry Rich, "He loves hearing stories from friends."

Enterplay trading card series 2 #25 gives Filthy Rich the description "Filthy Rich is just about the best salespony in Ponyville! He's the owner of Rich's Barnyard Bargains, not only an excellent store to buy somepony a gift, but also the first place to go to purchase some of the Apple Family's world famous Zap Apple Jam. Raising a pony as "spirited" as his filly Diamond Tiara is a lot of work, but luckily this pony is rich with wealth and patience. Just remember not to call call[sic] him Filthy: he prefers Rich!", attributes to him the Family Appreciation Day quote "... and that's how Rich's Barnyard Bargains became the cornerstone of retail in Ponyville!", and groups him with Stinkin' Rich and Diamond Tiara.

FILTHY RICH and his wealthy family date back to the very founding of Ponyville. His daughter is Diamond Tiara.

"Excellent news, and as usual, I get your first hundred jars?"
— Family Appreciation Day

"And, by capturing the whole sale market, purchasing in bulk and slashing all prices, we undermine every other gift market in town, and that's how Rich's Barnyard Bargains became the cornerstone of retail in Ponyville."
— Family Appreciation Day

"Please! I'll pay you anything!"
— Do Princesses Dream of Magic Sheep?

"Hmph! Looks like I'm not the only one who left Mares Day to the last minute."
— It Isn't the Mane Thing About You

"Why, Rarity, I figured you would certainly be interested in having the plaque at the location of my first shop. [...] Because my first shop was located right where the Carousal[sic] Boutique now sits."
— My Little Pony: Friendship is Magic Issue #30

"Official town greeter... I guess that doesn't sound too hard. Sign me up!"
— My Little Pony: Friendship is Magic Issue #31

"Gee, isn't it rather early in the day for fireworks?"
— My Little Pony: Friendship is Magic Issue #31

"We are most unhappy, Mayor Mare. We dislike the new sales tax!"
— My Little Pony: Friends Forever Issue #15

"Unacceptable! We business ponies keep this town running! Perhaps we should find a different town in which to set up our various sporting goods shops!"
— My Little Pony: Friends Forever Issue #15

"Are these those same girls you're always telling me about? Those bullies from that club that give you a hard time?"
— My Little Pony: Friends Forever Issue #16

"Diamond Tiara! I had no idea the prize was blue hay tickets! I didn't know you liked blue hay music! Why, you only entered the contest so you could take your old dad to see his favorite band, didn't you?"
— My Little Pony: Friends Forever Issue #16 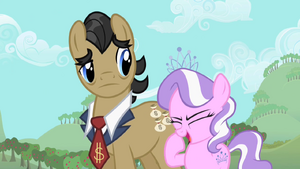