Fine Line is a female background unicorn pony with a light yellow coat, brown mane and tail, and blue eyes. She is unnamed in the show, but she is named in merchandise and other media.

Fine Line is named after Fran Fine from The Nanny, which her Enterplay card description references.[2][3][4][5]

Fine Line most commonly appears among other high-society Canterlot ponies. She first appears in The Best Night Ever as a guest at the Grand Galloping Gala (with her tail sometimes pink instead of brown). She is one of several chorus singers in At the Gala.

In Princess Twilight Sparkle - Part 1, Fine Line appears in the crowd panicking to Twilight when Princess Celestia and Princess Luna disappear. She appears in Maretropolis in Power Ponies, at Fashion Week in Rarity Takes Manehattan, in Appleloosa at the beginning of Pinkie Pride, at the Ponyville Days festival at the end of Simple Ways, in Sweetie Belle's dream in For Whom the Sweetie Belle Toils, in the stadium crowd in Equestria Games, and in Twilight's Kingdom - Part 1 in which her tail once again appears sometimes pink instead of brown.

In Make New Friends but Keep Discord, Fine Line appears at the Grand Galloping Gala. In Princess Spike, she watches some ponies play a polo game. In Rarity Investigates!, she appears at Princess Celestia's dinner party.

In The Beginning of the End - Part 1, Fine Line briefly appears walking through Canterlot with "Charm".

Fine Line is a playable character in Gameloft's mobile game. Her in-game description states, "Born and bred in Manehattan, Fine Line's nanny skills and street smarts put her furlongs above the rest!"

Fine Line was first named on her Enterplay collectible card game Canterlot Nights expansion set card #87 C, which gives her the description "Fine Line moved from Manehattan to nanny the foals of Canterlot elite, but an upper class stallion caught her heart and changed her life forever." 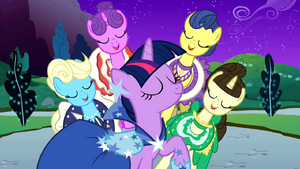