Fire Streak, or Lightning Dash, is a male Pegasus pony and a retired member of the aerial acrobatics group, the Wonderbolts. He first appears in the season one episode Sonic Rainboom. He is named Fire Streak in Newbie Dash and Parental Glideance, and he is named both Fire Streak and Lightning Dash in merchandise.

Fire Streak first appears in Sonic Rainboom as one of the celebrity judges at the Best Young Flyer Competition alongside Spitfire, Soarin, Misty Fly, Blaze, and Silver Zoom. In The Best Night Ever, he briefly appears mingling with Royal Ribbon in the V.I.P. section of the Grand Galloping Gala.

In season two, Fire Streak very briefly appears participating in the Wonderbolts Derby in Sweet and Elite, though he does not appear at the start or finish line.

In season five, Fire Streak attends a banquet at Canterlot Castle in honor of Princess Celestia's royal garden opening in Rarity Investigates! In the season six episode Newbie Dash, Fire Streak is first referred to by name; Rainbow Dash states that he retired from the Wonderbolts to become a full-time teacher. He is also mentioned by Scootaloo and depicted in photograph in Parental Glideance.

In My Little Pony: Ponyville Mysteries Issue #3, a unicorn stallion also named Fire Streak appears as a firefighter putting out a fire that was intentionally set at Ponyville Retirement Village.

In My Little Pony/Transformers Issue #1, Fire Streak appears on page 9 encountering the Autobot Windblade after Queen Chrysalis brings the Autobots and Decepticons of Transformers to Equestria. 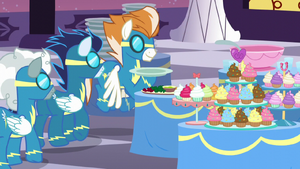