Firecracker Burst is a female unicorn pony who appears in the IDW comics' My Little Pony: Friends Forever Issue #9. She has a grayish green coat, vivid orange mane and tail, blue eyes, and a cutie mark of a red and yellow flame. She first appears in merchandise.

Her design in My Little Pony: Friends Forever Issue #9 gives her the same mane and tail style as in fanart made between mystery pack wave 1 and the comic.[1]

A mini-figure toy and collector card of Firecracker Burst are included in the first and twelfth waves of mystery pack toys. According to her wave 1 collector card, Firecracker Burst "loves watching fireworks and guessing how they'll look when they burst—it's always a surprise!" The mini-figure is also included in Toys "R" Us exclusive Friendship Celebration Collection. Firecracker Burst's description on the Friendship Celebration Collection toy package reads, "SWEETIE SWIRL and FIRECRACKER BURST have a pizza party!" 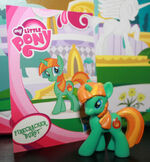