Firelight is a male unicorn pony and Starlight Glimmer's father who first appears in the season eight episode The Parent Map.

According to Jim Miller in May 2016, Starlight Glimmer "had parents in the scripted flashbacks in" The Cutie Re-Mark - Part 2 and The Crystalling - Part 1.[1] He later stated in August 2017 that they did not have character designs at the time of the season five finale/season six premiere's production[2] and may or may not have been in the scripts to begin with.[3][4][5]

According to Josh Haber in October 2017, Starlight was a latchkey kid in her youth[6] but not an orphan.[7]

Firelight appears in the season eight episode The Parent Map as a resident of Starlight Glimmer's old hometown Sire's Hollow when Starlight and Sunburst are called there by the Cutie Map. According to Starlight, he treats her like a little filly whenever she visits. As the head of the Sire's Hollow Preservation Society, Firelight is devoted to preserving and honoring the town's history, which puts him at constant odds with Sunburst's mother Stellar Flare and her opposing views, which center around developing and modernizing the town.

When Firelight learns that he is at the center of his daughter's map-given friendship mission, he eagerly takes the opportunity to spend time with her and help her solve her quest. With Starlight and Sunburst's guidance, he realizes that the efforts he made to preserve Sire's Hollow's history are actually an inconvenience to its citizens, and he teams up with Stellar Flare to decide on a more beneficial direction for the town.

Realizing their strained relationship with their parents is the very friendship mission they were summoned to solve, Starlight and Sunburst make amends with them. Firelight reveals that he only treats Starlight like a filly because he knows things were hard for her when she was little and wants to make her feel safe. He agrees to treat Starlight less like a filly and more like a friend from now on, and Starlight agrees to visit home more often.

In the season nine episode The Ending of the End - Part 2, Firelight takes shelter with Stellar Flare and other unicorns inside the School for Gifted Unicorns as Canterlot closes itself off from the other pony races. He is also present during the final battle against Queen Chrysalis, Lord Tirek, and Cozy Glow.

Firelight is a character in Gameloft's mobile game.[9][10]

As Starlight Glimmer's father, Firelight acts overly affectionate toward her, often calling her embarrassing pet names such as "Chipmunk Cheeks" and "Pumpky-Wumpkin", even in public. He is also somewhat of an ancient history enthusiast, holding the history of Sire's Hollow in such high regard that he wishes to preserve it. He also notes that the antiquities section of the local library is his favorite.

"You are just as cutesy-wutesy as ever!"
— To Starlight Glimmer, The Parent Map

"I know how hard it is for you to sit still and focus, soooo... would it help you pay attention to hold on to your bwankie?"
— To Starlight Glimmer, The Parent Map

"I found a really old town bylaw that nopony agrees on. Apparently, we're not supposed to prance or canter after dinnertime."
— The Parent Map

"I just know how hard things were for you when you left home. I guess I wanted you to feel safe, like... when you were young."
— To Starlight Glimmer, The Parent Map 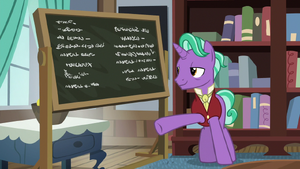 Retrieved from "https://mlp.fandom.com/wiki/Firelight?oldid=2147539"
Community content is available under CC-BY-SA unless otherwise noted.