Flash Magnus is a male Pegasus pony and figure of Equestrian legend. He makes his first appearance in My Little Pony: Legends of Magic Issue #4 and his first in-show appearance in the season seven episode Campfire Tales.

Flash Magnus is similar to Flash Sentry in name (sometimes full name), design, and occupation, and to Flash Prance in name and—according to the mayor of Baltimare in A Royal Problem's locked script—dragon-resisting.

In Campfire Tales, Flash Magnus is the subject of a campfire story told by Rainbow Dash, and he is Rainbow's favorite legend. In the story, Flash is a cadet in the Royal Legion of Cloudsdale during a time before the founding of the Wonderbolts. While flying over the Dragon Lands one day, Flash's squadron is intercepted and attacked by dragons, and several of Flash's comrades are captured during their retreat. Flash tries to convince his commanding officer Ironhead to rescue them, but Ironhead refuses, saying a direct attack on the dragons' lair is impossible.

Reasoning that he can outmaneuver the dragons in the air, Flash volunteers to be a decoy to lure the dragons away from their lair so the rest of the squadron can save their captured teammates. Ironhead acknowledges Flash's bravery and entrusts him with the fireproof shield, Netitus, to aid in his mission. As Flash distracts the dragons and shields himself from their fire breath, Ironhead and the others rescue the trapped Legionnaires and create a massive storm cloud. Flash leads the dragons into the cloud, causing them to get struck by lightning, and they fly off. With the whole squadron safe, Flash is commended for his courage, and Ironhead allows him to keep Netitus.

In the season seven finale Shadow Play, Flash Magnus is revealed to be one of the six "Pillars of Old Equestria" with Rockhoof, Mistmane, Somnambula, Mage Meadowbrook, and Star Swirl the Bearded, representing the Element of Bravery. Long ago, he and the other Pillars were brought together by the unicorn Stygian to battle a great evil. When Stygian later turned into the Pony of Shadows, Flash and the others sacrificed themselves to imprison him in limbo.

In present day, Rainbow Dash retrieves Flash's shield from the Dragon Lands for a ritual to free the Pillars from limbo. When the Pony of Shadows is freed along with them, Flash and the other Pillars team up with the Mane Six to separate Stygian (with Flash forming a fast camaraderie with Rainbow Dash) from the darkness and banish it to limbo once again.

In School Daze - Part 1 and Non-Compete Clause, a bust of Flash appears in the School of Friendship. In A Rockhoof and a Hard Place, Flash Magnus appears as a new drill sergeant for Princess Celestia's guard.

In The Ending of the End - Part 1, Flash Magnus and his fellow Pillars face off against Lord Tirek, but they are easily overpowered and drained of their magic due to Tirek being empowered by the Bewitching Bell. In Part 2, he and the Pillars keep Tirek, Queen Chrysalis, and Cozy Glow busy while Twilight's friends escape. He is later present during the final battle against the villains and helps the Mane Six and Young Six defeat them. In The Last Problem, Flash Magnus attends Twilight Sparkle's coronation ceremony. He also briefly appears in Rainbow Dash's group shot during The Magic of Friendship Grows.

In the My Little Pony: Legends of Magic series, Flash Magnus appears on cover A of Issue #1 and as the central character of Issue #4. In the latter issue, Sunburst reads about Flash's exploits after defeating the dragons, written by Star Swirl the Bearded. The Royal Legion is assembled to deal with a superstorm before it reaches Cloudsdale. Before they can do so, the storm enters griffon territory. Blackbeak of the griffon defense force accuses the Pegasi of intentionally creating the storm and refuses their offer to help.

Flash notices a small griffon village directly in the storm's path and wants to help them, but Ironhead forbids the Legion from taking action until the storm crosses into Pegasus territory. When the village starts getting swept by the storm, Flash renounces his position in the Royal Legion to save the griffons, and his teammates are soon inspired to do the same. Once the storm crosses territorial borders, the Legionnaires rejoin Ironhead and quickly disperse the storm. Flash and his comrades are hailed as heroes by the griffons, improving relations between the two kingdoms.

Flash Magnus also appears on My Little Pony: Legends of Magic Issue #7's cover RI and Issue #9's cover A. In Issue #10, he joins Stygian and his friends on their mission to save Stygian's village from the Dazzlings. In Issue #11, Rockhoof mistakenly calls him "Flash Sentry". In the Legends of Magic Annual 2018 comic, Flash Magnus leads the Royal Legion exercises with the Mighty Helm under Steela Oresdotter before joining the Pillars in a mission to rescue Princess Celestia and Princess Luna from an alternate Equestria.

In My Little Pony: Friendship is Magic Issue #84, Ocellus briefly takes on Flash's appearance as part of her school project. He also appears on the A cover of Issue #88.

In My Little Pony: Friendship is Magic Issue #101, Flash Magnus assists in defending Canterlot from the Knights of Harmony, only to be frozen in a block of ice by Mannah and mind-controlled by Morrigan. In Issue #102, Flash is freed from Morrigan's mind control and helps in finally defeating the Knights' leader Danu.

In Beyond Equestria: Rainbow Dash Rights the Ship, Flash Magnus' exploits are mentioned by Rainbow Dash in chapter 4.

Flash Magnus appears in an illustration in episode 4 of Fundamentals of Magic, "Magical Objects".

Flash Magnus is a character in Gameloft's mobile game, and serves as a boss battle helper during the "Reflections of Harmony" event. His in-game description states, "A legendary Royal Legionnaire, lauded to this day for his bravery. When in Cloudsdale, do as the Cloudsdalians do!"

"Commander! We need to save our captured comrades!"
— Campfire Tales

"Is this... Netitus, the fireproof shield?!"
— Campfire Tales

"Hey! Come and get me, fire-breath! If you can!"
— Campfire Tales

"If you are truly this accomplished, we will stop the Pony of Shadows twice as fast together."
— Shadow Play - Part 2

"The Pony of Shadows will have a hard time regaining power. When he rears his head, we’ll be ready!"
— Shadow Play - Part 2

"Sir, permission to conduct a rescue for the griffons of that town."
— My Little Pony: Legends of Magic Issue #4

"Sir, I know I'm probably not welcome in the Legion anymore. But I hope you don't mind if I still give you a hoof with this storm."
— My Little Pony: Legends of Magic Issue #4 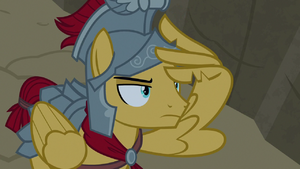