Flash Sentry is a male Pegasus pony who first appears in My Little Pony Equestria Girls as a Crystal Empire royal guard. Following his appearance in Equestria Girls, he has since appeared in series episodes and several IDW comics.

On June 16, 2013, Meghan McCarthy wrote on Twitter that Flash Sentry would not be a character in the fourth season of My Little Pony Friendship is Magic.[2] He did, however, make a non-speaking cameo in Three's A Crowd as well as a speaking cameo in Twilight's Kingdom - Part 1; Jim Miller explained on Twitter in May 2014, "He was never in the scripts. He was added later by request."[3]

According to M.A. Larson, Flash Sentry was originally going to appear in Slice of Life, where he would ask Cranky Doodle Donkey why no one likes him.[4]

In Three's A Crowd, Flash Sentry makes a non-speaking cameo as one of Princess Cadance's royal guard escorts and smiles before getting back on the Crystal Empire train.

Flash Sentry reappears in Twilight's Kingdom - Part 1, where he has a speaking role introducing the Duke and Duchess of Maretonia.

In The Last Problem, Flash Sentry briefly appears in Twilight Sparkle's group shot during The Magic of Friendship Grows.

In My Little Pony Equestria Girls, Flash Sentry appears as a royal guard in the Crystal Empire. He wears an additional back cloth and saddle plate normally worn by unicorn guards. Twilight Sparkle accidentally bumps into him when entering the throne room, and he formally announces her arrival to the other princesses. Flash's human counterpart later appears in the human world as a student of Canterlot High School.

When Twilight returns to the Crystal Castle at the end of the film, she bumps into Flash Sentry a second time. He helps her up and jokingly states that they need to stop meeting like that. When Twilight's friends say that she must have a crush on him, Twilight denies it but blushes. Pinkie Pie accurately guesses that he reminds Twilight of a rock guitarist whom she met and liked in the human world.

In My Little Pony Equestria Girls: Forgotten Friendship, Flash Sentry briefly appears as a royal guard outside the Canterlot Library. In the extended version, Sunset Shimmer does a double take when she passes by him.

Flash Sentry is a playable character in Gameloft's mobile game. His in-game description states "Flash Sentry is a high-ranking Pegasus pony in the Crystal Empire Royal Guard. He is kind, gentle and caring, and always offers help when needed."

A mini-figure pony toy of Flash Sentry has been displayed at the 2014 American International Toy Fair.[5] The toy was released as part of the eleventh wave of mystery pack toys and collector cards. The toy is the first time that his cutie mark is visible on the pony version of him. The collector card states, "FLASH SENTRY helps his friends whenever they need him!"

"We've got to stop bumping into each other like this."
— My Little Pony Equestria Girls

"The Duke and Duchess of Maretonia."
— Twilight's Kingdom - Part 1

"Excuse me, Princess. I couldn't help but notice your singing. You're good enough to have your own band!"
— Equestria Girls: Rainbow Rocks 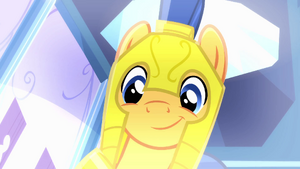