Flash Sentry's human counterpart appears in the My Little Pony Equestria Girls franchise. He is a student at Canterlot High School, electric guitarist for the band "Flash Drive", and Sunset Shimmer's ex-boyfriend.

In late April 2013, an image of human Twilight Sparkle and human Flash Sentry as they appear in the film, with Flash carrying a guitar case, was posted anonymously online bearing the file name "ts_fs.png" and accompanied by the text "MMM HMM."[3]

On May 16, 2013, Meghan McCarthy wrote on Twitter, "So funny people are calling blue haired guy in #EquestriaGirls 'Brad.' His name is obviously 'Dreamy Cutebottom' #notreally."[4]

Flash does not appear in the script for the IDW comics' My Little Pony: Equestria Girls Holiday Special.[5]

In My Little Pony Equestria Girls, Flash Sentry appears as a student of Canterlot High School. When Twilight Sparkle runs into him in the school hallway, he helps her up and asks, "Whoa. You okay?" Later, Twilight accidentally spills a beverage on him at the Sweet Shoppe, and he jokes they need to stop bumping into each other. Rarity reveals to Twilight that he is Sunset Shimmer's ex-boyfriend.

When Sunset Shimmer frames Twilight for ruining the Fall Formal decorations using photographic proof, Flash Sentry proves that the photos are fake and Vice Principal Luna allows Twilight Sparkle to continue running for Fall Formal princess. Twilight is so thrilled that she hugs Flash Sentry. He asks Twilight out to the Formal, but he mistakes her panicked "no's" as her response.

When the Formal goes on as originally scheduled, Twilight clears up the misunderstanding with Flash Sentry and agrees to have one dance with him. The Formal is disrupted when Sunset Shimmer rises to power and hypnotizes the students, including Flash Sentry. Twilight and her friends defeat Sunset Shimmer, turning everyone back to normal. Flash Sentry finally asks Twilight for their dance, and he imitates her odd dancing style on the dance floor, previously seen in Sweet and Elite.

In the second film, Flash Sentry compliments the Rainbooms on their playing and asks them if Twilight will return for the school's musical showcase. He is later seen in the cafeteria during the Dazzlings' song. At one point, Sonata Dusk strums the strings of his guitar.

Like most of the Canterlot High School student body, Flash and his band fall victim to the Dazzlings' spell and becomes overly competitive. During the Battle of the Bands, he and his band, which is specified in the first film's screenplay novelization Equestria Girls: Through the Mirror to be named "Flash Drive", faces off with the eco-kids. He also shows hostility toward Twilight, causing her to cry.

When the Dazzlings' spell is broken, Flash congratulates Twilight and hugs her, but Trixie interrupts their affectionate moment.

In Perfect Day for Fun, Flash Sentry appears at the Canterlot High carnival and watches the Rainbooms' concert. He makes partial appearances in the encore shorts Friendship Through the Ages and Life is a Runway. In the former, he appears as an audience member during Rainbow Dash's verse. In the latter, he appears as a silhouette during the fashion runway sequence.

Flash Sentry appears again in the third film as one of twelve students selected to represent Canterlot High School in the Friendship Games. He is shown to be bitter towards their losing streak against Crystal Prep Academy when he heckles Principal Celestia's pep rally about it.

Flash Sentry encounters human Twilight Sparkle twice in the movie. When she first arrives at CHS, she drops her glasses after bumping into him and he returns them, mistaking her for the Twilight he knows. He later congratulates her after she wins the Academic Decathlon for Crystal Prep. Both times, she blows him off to study her magical readings, much to his disappointment and confusion.

Flash is partnered with Sweetie Drops for a baking competition during the games' academic decathlon in which they mistakenly bake a loaf of bread instead of a cake.

In A Banner Day, Flash Sentry, Micro Chips and Sandalwood are tasked with making a banner to welcome Crystal Prep Academy to the Friendship Games. Flash's music-themed ideas for the banner conflict with those of his friends, but the final product is met with approval from Vice Principal Luna.

In the fourth film, Flash Sentry goes with his friends and classmates to Camp Everfree. He shares awkward interaction with human Twilight due to her resemblance to Princess Twilight. When he sees human Twilight spending time with camp co-director Timber Spruce, he confides in Sunset Shimmer, and she suggests that he get over Princess Twilight instead of waiting for her to come back.

Thanks to Sunset's "tough love", Flash is able to get over his crush on Princess Twilight, and he and Sunset start over as friends after their bitter breakup.

Flash makes minor/cameo appearances in the shorts Raise This Roof, Steps of Pep, and Monday Blues. In Good Vibes, he plays a central role by doing a good deed for Trixie and starting a chain reaction that spreads positive vibes to other people at the Canterlot Mall, ending with Sunset Shimmer doing a good deed for him.

Flash makes a cameo appearance in Queen of Clubs as a member of CHS' chemistry and baking clubs. In Best Trends Forever, he appears with a slightly altered hairstyle and hosts the weather segment of the CHS news, which he calls "Weather in a Flash". In Pinkie Pie: Snack Psychic, he appears as a patron of the Sweet Snacks Cafe and is tutored by Twilight for an upcoming math test.

In the second season short Best in Show: The Pre-Show, Flash enters the Canterlot High pet contest with his Boston Terrier, Banana. In the following short, they appear as participation winners. In Schedule Swap, he briefly appears eating in the school cafeteria. In Twilight Under the Stars, he attends the Canterlot Celestial Society Members' Social at the planetarium and is briefly seen talking with Sunset Shimmer and Timber Spruce. In I'm on a Yacht, he attends the pool party on the Luxe Deluxe cruise ship. In Five Lines You Need to Stand In, he appears at the Starswirled Music Festival standing in the security line talking to Sunset Shimmer. He later appears in the lines for a food truck and a photo booth. In Cheer You On, he and his band perform at Canterlot High. When Micro Chips' out of control toaster robot goes on a rampage, Flash cheers on the girls as they battle it, and recovers Sunset's geode necklace after she drops it. In Do It For the Ponygram!, Flash is briefly seen walking through the mall with Sunset.

In Stressed in Show, Twilight Sparkle mentions having to run lines with Flash Sentry for the school play, and Flash himself makes a background appearance in All the World's Off Stage. In Rarity Investigates: The Case of the Bedazzled Boot and Opening Night, he plays the role of Selfie Soot's father in the school play. In Happily Ever After Party, he appears during the school play's curtain call and attends the after-party in the Rarity and Rainbow Dash endings. In the Applejack ending, he appears in a video slide being played at the party.

Flash appears in Wallflower Blush's memories with Princess Twilight Sparkle at the Fall Formal and near the end of the special driving up to the school in his car.

Flash makes a brief cameo in Rollercoaster of Friendship walking towards the Equestria Land Ferris wheel.

In Spring Breakdown, Flash Sentry appears as a passenger aboard the Luxe DeLuxe spring break cruise, sitting at the poolside area during Rainbow Dash's search for "bad magic". During the Rainbooms' concert, he blushes when Sunset winks at him. When the ship starts to sink, he rescues one of his fellow passengers, and he later turns into a pony when everyone goes to Equestria in order to use the portal to Canterlot High.

In the segment "Saving Pinkie's Pie", Flash is recruited by Sunset to help her and Pinkie Pie get through a snowball war. Despite his excitement at finally being part of one of their "adventures", he proves to be of little help, falling and getting hit by snowballs moments later. In the segment "Dashing Through the Mall", he makes a background appearance standing in a line at the Canterlot Mall.

In My Little Pony: Equestria Girls Holiday Special, Flash Sentry is shown in a MyStable picture on page 15 and mentioned in Anon-a-Miss' MyStable post "I saw Flash Sentry at the..." on page 30; he is "at his grandma's for the holidays" according to artist Tony Fleecs.[1]

Flash also appears in My Little Pony: Equestria Girls: Sunset Shimmer's Time to Shine. In chapter 2, "Storm on the Horizon," he overhears Sunset Shimmer and her friends talking about Twilight Sparkle, and in chapter 14, "With Flying Colors," Sunset helps him with a math problem.

Flash Sentry is one of the coolest students at Canterlot High Students around, he is kind and always the perfect gentleman.[6]

Two Equestria Girls dolls of Flash Sentry were released for My Little Pony Equestria Girls: Friendship Games. One was shown at the 2015 New York Toy Fair and released in a two-pack doll set with human Twilight Sparkle. The other, a Kmart-exclusive, was released in a singles pack.

Flash Sentry is portrayed as kind and gentlemanly, as evidenced by his helping Twilight when she falls over. He returns Twilight's feelings of affection towards him. In the first two films, he also shows signs of social awkwardness and clumsiness, such as walking into a door while escorting Twilight to the Fall Formal dance and backing into a wall while exiting the band room.

While under the effect of the Dazzlings' magic, Flash becomes arrogant, cold, and spiteful. He lashes out at Twilight when she takes part in the Battle of the Bands, believing that she is trying to take victory away from him and he publicly ridicules Sunset Shimmer, calling her "the bad girl we love to hate."

Despite his typical niceness, Flash is still prone to frustration, demonstrated when he argues with Micro Chips and Sandalwood in A Banner Day and when his attempt at being friendly with the Shadowbolts is dismissed in Friendship Games.

"We've got to stop bumping into each other like this."
— My Little Pony Equestria Girls

"What was I gonna do? Not prove your innocence? Wouldn't be much of a Canterlot Wondercolt, would I?"
— My Little Pony Equestria Girls

"Uh, I don't suppose any of our friends from, uh... out of town might come? It being a special charity event and all."
— My Little Pony Equestria Girls: Rainbow Rocks

"Yeah, and then you decide to come back here just so you can beat me in the Battle of the Bands. I want this, Twilight, and you're trying to take it from me! Some friend."
— My Little Pony Equestria Girls: Rainbow Rocks

"You really think you're gonna help them?! Ha! I bet you have no idea what you're even doing!"
— My Little Pony Equestria Girls: Rainbow Rocks

"You mean other than us losing?!"
— My Little Pony Equestria Girls: Friendship Games

"Guess I can't get too jealous, right? After all, she isn't my Twilight. Not that the other Twilight was mine! But we were... you know."
— My Little Pony Equestria Girls: Legend of Everfree

"Come on, Sunset. We used to date. I know when something's bothering you."
— My Little Pony Equestria Girls: Legend of Everfree

"You know, you've changed a lot since we went out. You're so much... nicer."
— My Little Pony Equestria Girls: Legend of Everfree

"We're Flash Drive! Come see us play at the Sweet Shoppe next weekend."
— Equestria Girls: Through the Mirror

"Twilight Sparkle? Is she coming back to Canterlot High?"
— Equestria Girls: Sunset Shimmer's Time to Shine

"Anyone know anything about some guy named Timber Spruce?"
— Text message, Hasbro.com 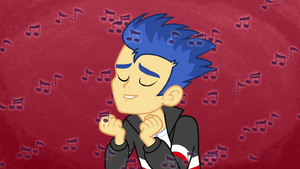 Retrieved from "https://mlp.fandom.com/wiki/Flash_Sentry_(EG)?oldid=2158065"
Community content is available under CC-BY-SA unless otherwise noted.