Fleetfoot is a female Pegasus pony and a member of the aerial acrobatics group, the Wonderbolts. She first appears in The Best Night Ever, and she is first mentioned by name in Sweet and Elite.

The name "Fleetfoot" was previously used for a male G1 character. This Fleetfoot is the leader of a race of ostrich-like creatures called the Sqree.

Fleetfoot first appears very briefly at a table in the VIP section of the Grand Galloping Gala in The Best Night Ever, though she has no lines and is never identified.

She appears again in Sweet and Elite, where Rarity refers to her by name and she comes in first place at the Wonderbolts Derby.

Fleetfoot appears again in Rainbow Falls as a member of the Cloudsdale Aerial Relay team with Spitfire and Soarin; the three compete to qualify for the Equestria Games. After Soarin injures his wing during practice, Fleetfoot conspires with Spitfire to recruit Rainbow Dash to their team and replace him. They initially invite her to practice with them until Soarin recovers, but they later ask her to join the team permanently. When Rainbow Dash finds out the truth, confronts them, and chooses to continue competing for Ponyville, Fleetfoot commends Rainbow Dash for her loyalty, having learned a valuable lesson from her competitor. The episode also reveals that Fleetfoot speaks with a slight lisp.

In Equestria Games, Fleetfoot and her team appear at the Games, competing in the horse-shoe event against the other teams and wins first prize. Fleetfoot also witnesses Spike singing the Cloudsdale Anthem wrong, and gets embarrassed because of it. Fleetfoot is also one of the Pegasi to attempt to save the crowd against an icy cloud one of the archer ponies accidentally causes.

Fleetfoot appears in Rarity Investigates! alongside the other Wonderbolts, and escorts newly discharged Wonderbolt Wind Rider out of the room before performing in the show.

In Newbie Dash, Fleetfoot appears as one of the central performing Wonderbolts. After Rainbow Dash fails to impress the team and earns a humiliating nickname, Fleetfoot explains how she earned the nickname "Flatfoot" on her first day as a Wonderbolt. Fleetfoot's photo appears in the classroom in Top Bolt.

Fleetfoot appears in Parental Glideance both in the present day and in flashback as a filly. In Marks and Recreation, she briefly appears flying with other Wonderbolts. In Secrets and Pies, Fleetfoot is one of the ponies that Pinkie Pie interrogates during her investigation of Rainbow Dash.

Fleetfoot appears at the beginning of Grannies Gone Wild with Soarin and Misty Fly, talking about the Wild Blue Yonder rollercoaster. In Yakity-Sax, Fleetfoot participates in a Wonderbolts show, but covers her ears when she hears Pinkie Pie playing poorly on her yovidaphone. In The Washouts, she and the other Wonderbolts perform flight formations at the Wonderbolt Academy. In Father Knows Beast, Fleetfoot appears helping Sludge fly alongside Blaze.

In The Beginning of the End - Part 2, Fleetfoot is among the Wonderbolts that get brainwashed by King Sombra. She, along with Spitfire, Soarin, Thunderlane, Silver Zoom, and High Winds block Rainbow Dash from entering Canterlot castle. At the end of the episode, Fleetfoot and the rest of the Wonderbolts get freed from Sombra's curse.

In The Last Crusade, Fleetfoot appears alongside Spitfire and Soarin during CMC Appreciation Day, drawing the Cutie Mark Crusaders' logo in the sky. In Between Dark and Dawn, Fleetfoot appears twice during Lotta Little Things, once during Princess Celestia and Princess Luna's first trot, and again as the princesses ride on the Wonderbolts' backs.

In The Ending of the End - Part 2, Fleetfoot and the other Wonderbolts take part in the final battle against Queen Chrysalis, Lord Tirek, and Cozy Glow. In The Last Problem, Fleetfoot flies with the Wonderbolts during Twilight's coronation ceremony.

Fleetfoot appears with the rest of the Wonderbolts during the Friendship Festival in My Little Pony The Movie.

In the IDW comics, Fleetfoot appears in Friendship is Magic Issues #9-10, Micro-Series Issue #10, and Friends Forever Issue #9. Both her eye color and, in a fantasy, cutie mark are shown to be different in the comics than they would be in the show, due to the aforementioned issues being released prior to the premiere of Rainbow Falls.

In the Friendship is Magic issues, Fleetfoot gets knocked out of the sky by the Cutie Mark Crusaders' fireworks at Ponyville's Summer Wrap-Up Festival and Hoedown, crashes into Big McIntosh, and instantly falls in love with him. She fantasizes about a life married to him, but her fantasy is the result of a concussion she suffers from the crash. Sometime after being carted off by medical ponies, Fleetfoot stalks Big McIntosh throughout the story, mistaking trinkets he hands off to her as gifts. When Tealove also shows interest in Big McIntosh, Fleetfoot gets into a catfight with her. In the Micro-Series issue, Fleetfoot receives an award "for defending Ponyville from rampant fireworks."

A human counterpart of Fleetfoot appears as a Canterlot High student and soccer team member in IDW Publishing's My Little Pony Annual 2013.

In My Little Pony/Transformers Issue #4, Fleetfoot takes part in the final battle against Chrysalis' changelings and the Decepticons.

In My Little Pony/Transformers II Issue #1, Fleetfoot and her fellow Wonderbolts fly through a Space Bridge and arrive on Cybertron. In Issue #2, she and her teammates work together with Starscream, Thundercracker, and Skywarp to capture and restrain King Sombra's brainwashed minions.

Fleetfoot is one of the available playable characters in Gameloft's mobile game, and serves as a boss during the "Wonderbolt for a Day" event

A high-flying member of Equestrian daredevil flying team, the Wonderbolts.

FLEETFOOT wants to be good so bad. To her, flying can be really serious stuff, so she studies all the cool moves every chance she gets. She loves watching and listening to great fliers for tips.

A mini-figure of Fleetfoot is included in the Target-exclusive Wonderbolts Cloudsdale Mini Collection with Rainbow Dash and other Wonderbolts members.

In Enterplay's collectible card game, Absolute Discord expansion set card #69 C of Fleetfoot gives her the description "Fleetfoot's all serious business when it comes to the Wonderbolts, but those closest to her know she's a great friend, and that she has a crush on somepony in Ponyville." High Magic expansion set card #70 U of Fleetfoot lists the quote "Ha, looks like we won a little TOO hard! Uh, seriously though, I hope that doesn't leave a mark..."

Beginning with The Maud Couple, Fleetfoot was added to the opening intro with the rest of the Wonderbolts.

"C'mon, Soarin, pick up the pace! You can do better than that!"
— Rainbow Falls

"Who says they need to know? Think about it, Rainbow Dash! This is your chance to fly with the winners!"
— Rainbow Falls

""Flatfoot". My first day, I misjudged my landing and came down right on Spitfire's hoof."
— Newbie Dash

"Ha, looks like we won a little TOO hard!

Uh, seriously though, I hope that doesn't leave a mark..."
— Enterplay collectible card game High Magic #70 U card of Fleetfoot 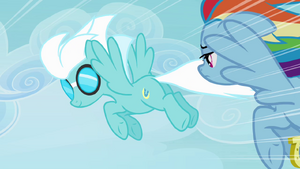