Fleur de Lis, or Fleur Dis Lee, is a female unicorn supermodel who first appears in the season two episode Sweet and Elite. She is unnamed in both the show and the comics, but she is named "Fleur de Lis" in first-party merchandise and "Fleur Dis Lee" in other merchandise and depictions. She is typically accompanied by Fancy Pants.

Fleur de Lis' build is similar to those of Princess Luna, Princess Cadance, the Headless Horse, the Mane-iac, "Tropical Dream", Sassy Saddles, S06E20 Unnamed Earth Mare #8, S06E20 Unnamed Earth Mare #9, and S06E20 Unnamed Earth Mare #10. On December 3, 2011, one of the show's layout artists stated that Fleur de Lis "did use a modified version of Luna's build. I think the idea was for more of a supermodel tall and skinny look, not sure though, since that's a design decision... Ridd or the directors would know for sure though."[2] Later in the same month, the show's art director Ridd Sorensen stated that Sweet and Elite's script described Fleur de Lis "as a 'lovely unicorn', so we thought she should look different from the regular pony models. If I remember correctly (and I might not!), I don't think it was a conscious decision to reuse Luna's build, at least not at the design stage."[3]

Fleur de Lis is introduced in Sweet and Elite. Her first appearance is with Fancy Pants when Rarity bumps into him while carrying Opalescence and a large array of bags. She pulls one of Rarity's bags of feathers off of his head and brushes him off, then uses her magic to pick up the feathers for Rarity. She spends much of the scene caressing or leaning on Fancy Pants and striking poses. At the end of the scene, she does not immediately notice when he walks away, and when she does notice, she quickly dashes away after him. She next appears twice during the song Becoming Popular (The Pony Everypony Should Know): in one of the checkerboard squares of Canterlot ponies and later alongside Fancy Pants.

Fleur appears together with Fancy Pants again briefly in Rarity Takes Manehattan, during the song Generosity as well as in the audience during the fashion show. In Equestria Games, she sits between Cherry Jubilee and Fancy Pants in the stadium.

Fleur appears in Amending Fences with Fancy Pants. In Canterlot Boutique, she appears at Canterlot Carousel's grand opening, briefly an Alicorn, and orders a Princess Dress. This marks the first in-show time she appears without Fancy Pants. In Crusaders of the Lost Mark, Fleur de Lis and Fancy Pants walk by Diamond Tiara and Spoiled Rich.

Fleur appears outside of Canterlot Carousel along with Fancy Pants in Forever Filly, and she watches Princess Luna's royal carriage roll through Canterlot in A Royal Problem.

Fleur appears sitting between Fancy Pants and Princess Luna in the audience for the play in Horse Play.

Fleur appears at the Canterlot Library in The Point of No Return and as a fan of buckball in Common Ground. In Between Dark and Dawn, Fleur gets assigned by Fluttershy to handle ponies waiting to get inside Canterlot castle.

In The Ending of the End - Part 2, Fleur de Lis takes shelter with Fancy Pants and other unicorns inside the School for Gifted Unicorns as Canterlot closes itself off from the other pony races.

Fleur's appearance in Rarity Takes Manehattan on the yacht during Generosity reappears in A-Dressing Memories.

Fleur de Lis' human counterpart appears in Friendship Games as a student of Crystal Prep Academy. She is first seen passing human Twilight Sparkle in the academy halls. During What More Is Out There?, Fleur closes the window shade of a classroom that Twilight looks into while singing. Fleur mostly appears throughout the film as a Friendship Games spectator, and during Canterlot High School's welcome party for Crystal Prep, she offers a cupcake to Sandalwood. During Midnight Sparkle's reign of terror, she along with Rarity and other students almost fall into Canterlot, but is helped up by Indigo Zap and Lemon Zest.

In School of Rock, Fleur briefly appears at the Natural History Museum. In Display of Affection, she appears admiring the improved window display made by Sunset Shimmer. In Five Stars, she is once again at the Sweet Snacks Cafe, and is served by Pinkie, who already knew what she would order. She is so impressed that she gives the cafe a five star rating on "Screech". In Run to Break Free, she appears talking to "Ginger Owlseye" on a sidewalk. In Five Lines You Need to Stand In, she appears standing with "Ginger Owlseye" in the Starswirled Music Festival's security line. She later appears alone in the festival's bathroom line, which Pinkie Pie turns into a conga line.

In Rollercoaster of Friendship, Fleur appears with a brand new outfit in the beginning of the special at the mall. She subsequently appears as an Equestria Land patron waiting for the rollercoaster, in security camera video footage, and attending the park's light parade.

Fleur de Lis appears waiting in the security line at the Starswirled Music Festival, and again at the PostCrush concert.

In the "Winter Break-In" segment, Fleur de Lis appears in the background with "Ginger Owlseye" and "Frosty Orange" at the Canterlot Mall. In the "Dashing Through the Mall" segment, she makes a brief cameo walking at the Mall.

Fleur de Lis appears once in the Micro-Series Issue #3 story How Rarity Got Her Groovy Back, on page 21 with Hoity Toity, Flax Seed and Wheat Grass in Canterlot after Rarity's fashion show there.

Fleur de Lis appears in a photograph in All About Alicorns, and in Land of Harmony.

Fleur Dis Lee is an available character in Gameloft's mobile game, which is one of the sources of her name, and serves as an enemy minion during "The Crowning Achievement" event. A Changeling assuming her identity but pretending to be an Alicorn, who was identified by the game as the unicorn Fleur Dis Lee herself, was added to the Android version of the game on March 28, 2013 and to the iOS version of the game on April 15, 2013, before being replaced by the real Fleur Dis Lee in both versions of the game on June 13, 2013. Fleur Dis Lee's in-game description reads, "A unicorn supermodel who is always booked for a photo shoot, her cutie mark is three fleurs-de-lis, which is where her name comes from."​[​citation needed​]​ Fleur Dis Lee's in-game description previously read, "While this unicorn supermodel was away for a photo shoot, a Changeling assumed her identity but pretended to be an Alicorn! Knowing Fleur Dis Lee's true nature, her friends exposed the Changeling's deception just in time for her return to Canterlot."[4] The disguised Changeling's in-game description earlier read, "A supermodel unicorn pony. Her cutie mark is three fleurs-de-lis."[5]

Fleur de Lis appears on the Season 2 poster, leaning against Fancy Pants in almost exactly one of the same poses as in Sweet and Elite.

In series 2 of Enterplay's trading cards, card #15 groups Fancy Pants with Fleur de Lis, Jet Set and Upper Crust, listing them as "Canterlot's Elite", and card #24 groups Jet Set and Upper Crust with Fleur de Lis, Fancy Pants, and Prince Blueblood, listing them as "The Canterlot Elite". In the Enterplay collectible card game's expansion sets Canterlot Nights, Equestrian Odysseys, and Friends Forever, cards #70 C, #67 C, and #41 U respectively of Fleur Dis Lee list her name with a trademark symbol and give her the respective descriptions "Fleur learned long ago to get ahead in Canterlot by being seen with Very Important Ponies. It's worked out for her so far!", "Fleur loves being the center of attention, plus she uses her high position on the Canterlot social ladder to draw attention to some of the charity efforts she supports.", and "Fleur is a connoisseur of many of the finer arts."

The fan-designed WeLoveFine.com art print "Young Fleur" depicts Fleur de Lis with freckles, braces on her teeth, and her mane tied back using a bow.[7][8] The art print is no longer available; its artist Karol Pawlinski stated on May 8, 2013 that "It was taken down because there were no units sold for more than three months."[9]

"Mmm! A pony with expensive tastes, I see."
— Sweet and Elite 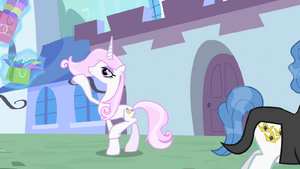