Flight to the Finish

Flight to the Finish is the fifth episode of the fourth season of My Little Pony Friendship is Magic and the seventieth episode overall. The episode title is a play on the term "fight to the finish."

In this episode, the Cutie Mark Crusaders want to carry the Ponyville flag at the Equestria Games, but after some hurtful remarks from Diamond Tiara and Silver Spoon, Scootaloo wants to do more than just carry a flag.

On July 20, 2013, an animatic clip of this episode was shown at San Diego Comic-Con International. In the clip, Apple Bloom, Diamond Tiara, Scootaloo, Silver Spoon, and Sweetie Belle appear, and Ms. Harshwhinny is mentioned.[2][3][4]

At the schoolhouse, Cheerilee informs her class that they have two special guests with an announcement. She introduces the first: Ms. Harshwhinny, the head of the Equestria Games. As she addresses the class about the upcoming Games, the class's second special guest Rainbow Dash arrives, soaring through the classroom's open window. She then tasks the students in the class with coming up with the most spectacular routine, and whoever does will be going to the Games.

After reining in Rainbow Dash's over-enthusiasm, Ms. Harshwhinny elaborates: the foals in the class are to be split into teams. Each team will create a flag-carrying routine that will be judged. Rainbow Dash interrupts to inform the foals that she will be coaching them and that she herself was a flag carrier for the Equestria Games when she was a filly, with flying being a central part of her routine. Harshwhinny warns Rainbow to show professionalism as the students' coach and tells the class that Rainbow will be accompanying the competitors to the Crystal Empire in three days. After offering the students some more words of encouragement, Rainbow Dash takes her leave of the classroom (professionally, of course). Harshwhinny follows suit, but not before giving one more piece of advice: their performance should show the judges what their hometown of Ponyville means to them.

When the bell rings and school lets out, the fillies and colts all race off to practice their own routines for bearing the flag. Scootaloo, Sweetie Belle and Apple Bloom are briefly stumped as to what they are supposed to do before they realize that they represent Ponyville's most distinctive feature: all of the three races of Equestria live there in a harmonious mixed community characterized by friendship. The Crusaders know that conveying such a message through their routine will take hard work and practice, but they are determined; they may be little, but they have hearts as strong as horses.

Seeing this, Diamond Tiara and Silver Spoon have no shortage of insults for the Crusaders, ridiculing them for their lack of cutie marks as usual and noting that having "blank flanks" represent Ponyville would be unthinkable. But the Crusaders are still determined, and they are not going to lose confidence to being called "blank flanks." They accept Diamond Tiara and Silver Spoon's challenge.

The Crusaders demonstrate to Rainbow Dash a brief performance, demonstrating the main characteristics of the three races and how they live together in harmony in the town. The act concludes with Scootaloo jumping her scooter through a hoop and the three fillies making an inverted pyramid as the town flag rolls past on Scootaloo's now-unmanned scooter. Despite her attempts to stay professional, Rainbow Dash is amazed by this "work in progress". She flies off, and the Crusaders continue practicing.

The two bullies approach the Crusaders and offer insincere congratulations. Almost immediately, they begin to pour scorn on Scootaloo, implying strongly that she is unfit to represent the Pegasi at the Equestria Games due to her inability to fly. Although the other two Crusaders are dismissive of the bullies' taunts, Scootaloo is deeply disheartened. The flightless filly decides that the only way for them to win is for her to fly; her trouble with getting off the ground gives Apple Bloom and Sweetie Belle cause for concern.

A rift between the Crusaders

The Crusaders spend the next several hours, well into the evening, trying to rework their performance with Scootaloo flying through the hoop rather than driving her scooter through it. Because of Scootaloo's inability to do more than hover for short periods, this does not work, and Apple Bloom and Sweetie Belle are quickly losing their patience (as well as sleep). When the Crusaders show the revised and unremarkable routine to Rainbow Dash the next day, she attempts to be supportive but it is clear that she preferred the act's original version.

Scootaloo is worried about the competition the next day. She is about to voice her next idea to help her fly, but Apple Bloom and Sweetie Belle are too tired to continue. They begin to resent the whole routine and accuse Scootaloo of making the performance all about herself. The two call it a day and leave for the day, leaving an increasingly despondent Scootaloo to practice alone. Despite hours of trying, Scootaloo fails to fly and finally gives up.

The next morning, the foals of Cheerilee's class are boarding the train to the Crystal Empire, and Apple Bloom and Sweetie Belle see that Scootaloo is nowhere to be seen. Scootaloo arrives at the last minute and informs her friends that she won't be going with them, saying that their chances of winning are hindered by her inability to fly. The tension between the three boils over and Apple Bloom loses her temper, telling Scootaloo that if she wants to quit, they don't need her. Scootaloo, deeply upset, is left on the platform as her friends board the train and leave for the flag ceremony auditions.

A trio, a team

On the train, Rainbow Dash talks excitedly with Apple Bloom and Sweetie Belle about their upcoming audition. When she hears that Scootaloo stayed in Ponyville and that the other two did nothing to stop her from quitting, she expresses her disappointment in them for leaving their friend behind. Rainbow Dash pulls the emergency brake and urges the two Crusaders to follow her back to Ponyville and get Scootaloo.

In her bedroom, a dejected Scootaloo pulls down various athletics-themed posters from the walls, throwing them in a garbage bin along with her scooter. Rainbow Dash enters with Apple Bloom and Sweetie Belle, who tell Scootaloo that they still need her for their routine: whether she can fly or not. Drawing focus once again to the fact that she can't fly, Scootaloo reminds Rainbow Dash that she flew when she was a flag carrier. Rainbow tells her it doesn't matter if she can't fly and reminds her and her friends that friendship, between the three of them and between the three races, is the point of their performance. Rainbow Dash adds that whether or not Scootaloo will someday fly, she's already "all kinds of awesome".

The Crusaders perform their routine as intended before a packed stadium in the Crystal Empire. Ms. Harshwhinny then announces the winners of the competition and selected flag carriers of the Equestria Games: the Cutie Mark Crusaders, much to the chagrin of Diamond Tiara and Silver Spoon. Rainbow Dash coolly congratulates the three, while Ms. Harshwhinny is left astonished by their performance, leaving Rainbow to remind her to conduct herself professionally.

As the Crusaders share a laugh, Scootaloo looks at her bare flank. No cutie mark yet appears, but she expresses hope to her friends that they will get their cutie marks in flag carrying.

Scootaloo: So... what's special about Ponyville? It's... It's... I got it! It's a place where different kinds of ponies live together as friends!
Apple Bloom: Earth ponies like me!
Sweetie Belle: Unicorns like me!
Scootaloo: And Pegasi like me!

Scootaloo: So what did you think?
Rainbow Dash: That...was...AMA— [thinking] Wait. Hold on now. Gotta stay calm, cool, and collected. [out loud] To give a calm, clear analysis...Wait, you whipped that together yesterday?! That...is— [thinking] Professionalism, Dash! Keep those emotions in check! [out loud] Overall, it was kinda...sorta... Overall, it was okay. Keep working hard and who knows? You might have a shot. Gotta go!

Diamond Tiara: Did you see that?! I can't believe I'm saying this. They could win!
Silver Spoon: But how do we stop them? We already called them blank flanks!

Scootaloo: If we wanna win, I'm gonna have to fly!

Scootaloo: So? What'cha think?
Rainbow Dash: That's... y'know... good and all, heheh... I just thought... maybe possibly you might wanna go back to, say, the first version of the act, which was, I dunno, what's the word, better? Just do the routine as it was! Don't mess with success, right?

Diamond Tiara: Sorry you can't make it! We'll take some pictures for you from the winner's circle!
Sweetie Belle: I do not like them one bit! 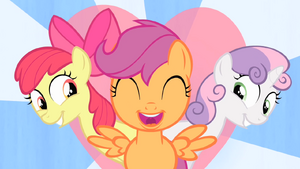 Flight to the Finish image gallery