Welcome to the Ponyville Schoolhouse...again!

Hello, Cheerilee! Haven't seen you in a while!

We have a special guest today!

Ms. Harshwhinny, the pony of many faces...

...all of them scowling.

There's gonna be an event where you must compete for glory.

Youth is so wasted on the young, she thought.

"Cut to the chase already!"

Who's gonna be the lucky ponies?

She was the one who saved me from a well.

These two should compete in a dance residual.

"You're gonna love this!"

You will form teams and be rated on...

"Get to the nitty-gritty later!"

Scootaloo, staring wide-eyed at her idol.

Why are you so awesome?

Professionalism is my middle name!

What happened to "Rainbow 'Danger' Dash"?

Hey, Twist! Haven't seen you in a while!

Rainbow Dash is evilly introducing one of her new episodes.

Been taking physics-breaking skills from Pinkie.

Why do I have to deal with this?

Remember kids, do your best and show up bright and early tomorrow.

Thank you, and I'll be on my way.
Add a photo to this gallery

Discussing their chance to carry the Equestria flag.

I bet everypony in our class is going to compete.

Because I'm so in!

So...what should our act be about?

You see what I mean?

We're going to need a lot of practice...

But, we can do it, because we've got hearts as strong as horses!
Add a photo to this gallery

They may be little, but they can make big hoofsteps.

The sun is bright today.

This scene is awe-inspiring.

The following gag was ruined by three grass blades in the shot.

"We're the Cutie Mark Crusaders, and you should believe!"

How long can they hang there?

Silver Spoon and Diamond Tiara, sitting and clapping their hooves.

Does Silver Spoon enjoy taunting us?

Ugh! She sang fine a few seconds ago!

Yeah, yeah, we get it, we got blank flanks. Seriously, girls, it's getting old.

You're so on, girls!
Add a photo to this gallery

The stage, and Miss Cheerilee with the other foals.

Earth ponies, unicorns and Pegasi all reign in this town of friendship!

Sweetie Belle must have made this.

Scootaloo riding the scooter with a flag.

Their act must have been awesome, to impress the rich fillies.

Uh Scootaloo, I thought you said she'd like it?

..We can make this work!
Add a photo to this gallery

A Pegasus who can't even fly

I can't believe I'm saying this, but they could actually win! I mean, do you remember their last act?

But how do we upset them? We already called them blank flanks! It's almost like they don't care anymore!

We'll just have to find a new way to get under their skin.

Looking for a weak spot to humiliate the Crusaders with.

"Get under their wings."

In fact, we think you're very brave.

Because you're trying to show all three types of ponies, and you've got a Pegasus who can't even fly.

I mean, a Pegasus pony at your age? You should have been flying long ago.

So what if my wings can't get me off the ground?

"Your career as a flag carrier isn't getting off the ground either."

Miss Harshwhinny will never pick a Pegasus pony who can't fly to represent Ponyville in front of all of Equestria.

Miss Harshwhinny never said anything about that!

I would have thought it was obvious.

This is Ponyville, not Crippleville. That's way on the other side of Equestria.

I believe I can fly.

Is this a good idea?

Is this what its come to?

"I liked the routine the way it was!"

"But all she cares about now is flying."

Scootaloo, trying her best to fly.
Add a photo to this gallery

Okay Cutie Mark Crusaders, this is your final run before you perform at the stadium tomorrow.

I know you're going to absolutely, positively...

Uh... Did they over-prepare themselves or something?

...go coach these other ponies!"

"Without you two, who's gonna hold up the hoop?"

"Ugh! You don't listen to yourself!"

How long has she been awake now?

I give up.
Add a photo to this gallery

If she's going to quit on us, we don't need her!

"Fine." Sweetie's actually not fine with this.

The eyes of both cuteness and sadness.
Add a photo to this gallery

No friend left behind

I don't think you're supposed to pick favourites, Dashie.

Apple Bloom and Sweetie are irritated.

Scootaloo throwing away her scooter.

Dashie at the door.

Nothing like a rub on the head from your pseudo-sister to cheer you up!

The CMC are all back together!

"Let's win this thing!"
Add a photo to this gallery

Racing to the Crystal Empire

To the Crystal Empire!

Scooting toward the Empire!

Switching it into high gear!

Hey, Sweetie Belle's helmet has a notch for her horn to fit!

I'm sure those two were looking for London 2012 and wound up her by mistake.

And the winner is...

That's a nice look for those two meanies.

Ooh! They look even prettier when they're upset!

Ms. Harshwhinny seems to have lost her professionalism.

The writers were definitely trolling here.

I know! I bet we'll get cutie marks in flag carrying!

Rainbow's sad about this.
Add a photo to this gallery

Some-pony needs a hug.
Add a photo to this gallery 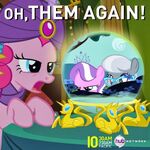 Flight to the Finish teaser 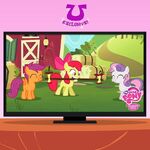 CMC Flight to the Finish teaser 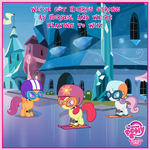 A promotional image for Hearts Strong as Horses. 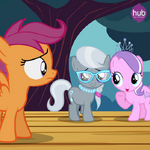 Add a photo to this gallery
Retrieved from "https://mlp.fandom.com/wiki/Flight_to_the_Finish/Gallery?oldid=2018173"
Community content is available under CC-BY-SA unless otherwise noted.