Flitter is a grayish blue Pegasus pony who wears a pink bow in her mane; she has a slightly slurred accent. Her cutie mark is three blue and white dragonflies, although the number of dragonflies changes sometimes.​[​specify​]​

Flitter is a grayish-lilac color, and her mane style is only seen on one other pony. 'Flitter' means 'to move quickly in a seemingly random manner', and the term is often used to describe the flapping of wings. Flitter shares her name with a G2 Earth pony baby whose eye and mane colors, and to a lesser extent cutie mark, are similar to hers.

At the beginning of Hurricane Fluttershy, Flitter talks with Cloud Chaser about Rainbow Dash's fliers for an all-Pegasi meeting. At the racetrack, she stretches and Rainbow Dash says, "Stretch those glutes, Flitter!" She and the other Pegasi stop exercising when Rainbow Dash addresses them.

Twilight Sparkle tries to use a fan to demonstrate how she will measure their flying power. Flitter asks Spike to explain it more clearly. Later, when Fluttershy is about to have her flying power measured, Flitter and Cloud Chaser laugh. Fluttershy thinks they're laughing at her and she becomes nervous.

Flitter works together with the other Pegasi to make the hurricane. She says to Fluttershy, "Great job, Fluttershy, that was awesome!"

In Equestria Games, Flitter and Cloud Chaser are two of the Pegasi attempting to prevent the icy cloud from crashing into the stadium. She also appears with Cloud Chaser again in Twilight's Kingdom - Part 2.

In Slice of Life, Flitter appears at Cranky Doodle Donkey and Matilda's wedding.

In The Mane Attraction, Flitter helps set the stage for Coloratura's performance. She and Cloud Chaser appear in the crowd during Friends Are Always There For You in The Cutie Re-Mark - Part 2.

In She's All Yak, Flitter appears in the reused image of The Cutie Re-Mark - Part 2 during Fit Right In.

My Little Pony Friendship Express Train™ Puzzle Adventure shows Flitter in a screenshot from Hurricane Fluttershy. This was her first appearance, as the game was released earlier than the episode was.

In the chapter book Discord and the Ponyville Players Dramarama, Flitter has a speaking line worrying about Discord causing chaos to the community musical. Later, she and Cloud Chaser help Rainbow Dash add some weather effects to the show.

In the Signature My Little Pony magazine issue 69 comic Daring friends and the missing story!, Flitter appears at the Canterlot Magic Fair.[1]

Flitter appears on the Season 2 poster standing with Rumble and grouped with other Pegasi from Hurricane Fluttershy.

Series 2 of Enterplay's trading cards includes a Flitter & Cloudchaser card, #17. The back of the card shows their names both with trademark symbols, lists Thunderlane, Rumble, and Bulk Biceps as friends, and states "Flitter and Cloudchaser's accelerative velocity translates into an excellent cumulative H2O antigravitational potential. Which, in English, means these two can really fly! These two fun-loving pegasi are longtime friends with fellow flyer Thunderlane, and they love foalsitting his little brother Rumble. Cloudchaser has recently been seen at the Wonderbolts Academy, but does she have what it takes to join such elite fliers? Good luck, Cloudchaser!"

Flitter also appears with her name shown with a trademark symbol in Enterplay's collectible card game. Her card α #42 C gives her the description "Don't let the cute bow fool you: when push comes to shove, this fun-loving mare stands up for her friends."

"What exactly does this machine do?"
— To Spike, Hurricane Fluttershy

"Then the first group'll be going too fast, and they'll get separated from each other!"
— It Ain't Easy Being Breezies

"He's going to ruin our musical!"
— Referring to Discord, Discord and the Ponyville Players Dramarama

"It's not about winning, it's about having fun!"
— Enterplay collectible card game Friends Forever #65 R card of Cloudchaser & Flitter 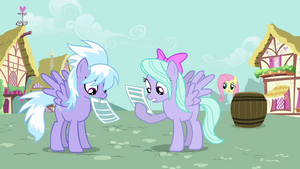