Florina Tart is a female Earth pony and a member of the Apple family. She has a pale green coat, a two-tone pink mane, deep cerise eyes, and a cutie mark of an apple and three apple blossoms. She is unnamed in the show, but she is named in merchandise and other media.

Florina Tart first appears in Apple Family Reunion. She attends the eponymous reunion with other Apple family members, has a run-in with a swarm of fruit bats during a family hayride, takes part in the raising of the new barn at Sweet Apple Acres during Raise This Barn, and appears in the family photo.

In Pinkie Apple Pie, Florina Tart appears in a photo on a wall in Goldie Delicious' cabin. In Pinkie Pride, she briefly appears walking with Apple Cobbler before Pinkie's Lament. In Filli Vanilli, she appears as a spectator of the Ponyville turkey call competition.

In Leap of Faith, Florina Tart walks toward Flim and Flam's tent at the beginning of the episode. She later appears at the Rainbow Falls Traders Exchange in Trade Ya! and in the Crystal Empire stadium crowd in Equestria Games.

In Appleoosa's Most Wanted, Florina Tart, together with Bushel, Candy Apples, and Apple Cinnamon, appears as a member of Applejack's team during the Appleloosa rodeo's hay bale stacking event.

In Non-Compete Clause, she appears in the School of Friendship fountain plaza walking with Royal Riff and Golden Harvest. In Molt Down, she briefly appears walking to the school with Yona.

In The Beginning of the End - Part 2, Florina Tart briefly appears as one of King Sombra's mind-controlled slaves.

On My Little Pony Micro-Series Issue #7 page 18, Florina Tart appears at the Ponyville Flea Market. On My Little Pony/Transformers Issue #2 page 11, she appears in the audience of Pinkie Pie's baking show. In Issue #4, she is summoned to Sweet Apple Acres by Discord to help Applejack drive the Insecticons off the farm.

Florina Tart is a character in Gameloft's mobile game. A texture matching her has been included in the game's saa_type01_master_04.pvr file. 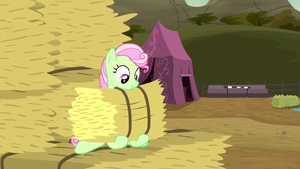