View source
watch 01:26
'My Little Pony' Lore: Flurry Heart
Do you like this video?
Play Sound

For the Earth pony mare whose placeholder name is "Flurry", see List of ponies/Earth ponies#Flurry.

Flurry Heart, also called Baby Flurry Heart[1] or Princess Flurry Heart, is an Alicorn foal and the newborn daughter of Princess Cadance and Shining Armor. She is first indirectly mentioned in the season five episode The One Where Pinkie Pie Knows, and she makes her physical debut in the season six premiere.

She is one of few Alicorns depicted as babies, another example being Princess Skyla. Flurry Heart resembles Evening starlite in pony type and coat and mane colors and shares her wing design with Twilight Sparkle and alternate-timeline Pegasus Pinkie Pie. Unlike the body design used for most infant ponies in the series, such as Pound Cake and Pumpkin Cake, Baby Flurry Heart uses the body design previously used for Applejack's birth certificate in The One Where Pinkie Pie Knows.

On January 28, 2016, in response to a Twitter questioning of "the logic of cluttering things up with yet ANOTHER alicorn princess", Jim Miller said to "understand that I'm not the ONLY person making decisions. I have input but I win some and lose some."[3] In an Equestria Daily interview, Miller stated, "I seem to recall that this actually came more from a storytelling opportunity rather than exclusively from Hasbro Brand, but they were excited about the possibility of a new alicorn."[4] Later during March 2016, in a Twitter conversation regarding The Crystalling's villain or lack thereof, Josh Haber stated that "the baby was the villain. Just like IRL!"[5]

Flurry Heart is first indirectly mentioned in the season five episode The One Where Pinkie Pie Knows, in which Princess Cadance and Shining Armor announce to Twilight Sparkle and her friends that they're having a baby.

Flurry Heart makes her on-screen debut in the season six premiere, her reveal being witnessed by the Mane Six, Princess Celestia, and Princess Luna. Unlike Twilight and Cadance, Flurry Heart is a natural-born Alicorn; Celestia remarks that "the birth of an Alicorn is something Equestria has never seen".

To commemorate Flurry Heart's birth, the Crystal Empire holds a ceremony called a "Crystalling", in which she is presented to the public, and the light and love within the Crystal Ponies makes the Crystal Heart stronger. However, her crying causes the Crystal Heart to shatter, potentially ushering in an eternal winter. During Twilight and her friends' efforts to restore the Heart, Flurry Heart makes things difficult for them by flying all over, teleporting all over the place, and zapping things with her magic.

With the help of Sunburst, the ponies carry out Flurry Heart's Crystalling and restore the Crystal Heart. It is only after the incident is over that Flurry Heart is given her name, which her parents intend to use to mark the occasion.

Flurry Heart appears in The Times They Are A Changeling, having grown a little since Twilight's last visit to the Empire. While meeting the changeling Thorax, the love around Flurry Heart causes him to give in to his instincts and expose his true form. After Thorax is accepted as the ponies' friend, Cadance allows him to get officially acquainted with the Alicorn infant.

In Celestial Advice, Flurry Heart appears as a cuckoo in a cuckoo clock made by Starlight in a hologram made by Twilight. She also appears in one of the photos around the mirror Twilight gives Starlight.

In A Flurry of Emotions, Twilight agrees to foal-sit for Flurry Heart while Cadance and Shining are visiting an art exhibit, even though her schedule is already overbooked as is.

In A Royal Problem, Flurry appears as a DJ in Cadance's dream bubble as Princess Celestia views the dreams of everyone in Equestria.

In Once Upon a Zeppelin, Flurry Heart appears on vacation with the rest of her family. She plays at the "Peewee Princess Playtime" activity where she uses her magic to play with the other foals present. She, Shining Armor and Twilight Velvet later dress as stars and act as their own version of the Northern Stars for Twilight.

In the one-hour special My Little Pony Best Gift Ever, Flurry Heart travels to Ponyville with her parents in order to spend Hearth's Warming with Twilight. When she sees Twilight making a magic pudding for Pinkie Pie, she adds several extra ingredients (unbeknownst to her parents and aunt), which causes the pudding to go out of control. After the pudding is neutralized, Flurry and her parents join Twilight and her friends in celebrating Hearth's Warming.

In The Beginning of the End - Part 1, Flurry Heart is abducted along with her parents by King Sombra when he invades the Crystal Empire, but she is rescued when the Mane Six defeat him with the Elements of Harmony. In A Horse Shoe-In, Flurry is mentioned by Starlight and Sunburst, as the latter explains that Flurry is getting older and doesn't need a crystaller anymore.

In The Last Problem, a grown-up Flurry is depicted in stained glass in future Canterlot Castle, and she attends Twilight's coronation ceremony with her parents in flashback. She also briefly appears in Twilight's group shot during The Magic of Friendship Grows.

As a natural-born Alicorn, Flurry Heart possesses more powerful magic than newborn unicorns. A blast of magic created by her sneeze alone can blast through several ceilings, and her crying shatters the Crystal Heart into pieces. In addition, she can perform multiple consecutive teleportation spells. Following her Crystalling ceremony, her magic is more stable and controlled.

In A Flurry of Emotions, Flurry demonstrates advanced magic capability like protection spells and telekinesis on multiple objects (though she is lacking in finesse with the latter).

In Once Upon A Zeppelin, she uses her magic to play with other foals by stacking them on top of each other without hurting any of them or causing them discomfort.

In My Little Pony Best Gift Ever, she teleports a bag of flour into her mother's hooves at the same time as she teleports out of them.

In The Beginning of the End - Part 1, she fends off King Sombra's brainwashed minions with blasts of magic, and uses another blast to sabotage Sombra's attempt to take the Crystal Heart back from Cadance.

Flurry Heart is featured in the storybook My Little Pony: Good Night, Baby Flurry Heart, in which Shining Armor and Princess Cadance tell her bedtime stories.

In the chapter book Princess Cadance and the Spring Hearts Garden, Flurry Heart takes part in the Hearts and Hooves Day Heartsong ceremony with her parents and the Crystal Ponies. Shining Armor mentions in chapter 1 that the song Cold Hooves, Warm Hearts is her favorite, and narration in chapter 7 states "Flurry Heart was old enough to stay with the castle foal-sitter". Flurry Heart is also mentioned in chapter 8 of Starlight Glimmer and the Secret Suite, "Comet Tail's Curse".

Flurry Heart serves as the focus of Baby Flurry Heart's Heartfelt Scrapbook as Pinkie Pie makes a scrapbook for her.

Flurry Heart is a character in Gameloft's mobile game. The game's description of her states, "First alicorn baby in all of time and space -- and doesn’t she have such a CUTE little face?!"

Two toys of Baby Flurry Heart were released in the Explore Equestria line. One is a translucent mini-figure included in the Crystal Empire playset.[1] "The two-story castle set will retail for $39.99 and comes with Princess Cadance and Baby Flurry Heart figures, dress, tiara, earrings, comb, and other themed accessories. It features a rotating throne — a necessity for any true princess, obviously — and spinning crystal closets. Plus, a little press on the heart and the floor lights up with cutie marks!"[6]

The other toy is a large doll with interactive sounds and actions, with a rattle and baby bottle included. "PRINCESS CADANCE & SHINING ARMOR have welcomed a new addition to their royal family: their adorable foal BABY FLURRY HEART! Little ones can nurture and care for the sweet MY LITTLE PONY EXPLORE EQUESTRIA BABY FLURRY HEART pony, a soft and snuggly baby pony of their own. She responds to sound and touch – her unicorn horn lights up in different colors, and she talks and makes cute sounds!"[1]

FLURRY HEART's birth was something new in Equestria—an Alicorn pony had never been born before. To mark the occasion, a traditional Crystalling ceremony was announced. The Crystal Heart would instill the powers of light and love within the small foal. But Flurry Heart's uncontrollable magic made such a ceremony difficult. Only by banding together were the ponies of the Crystal Empire able to restore the Crystal Heart and save the royal baby.

In the opening beginning with The Maud Couple, Flurry and her parents appear in the throne room with Celestia and Luna after they receive the letter.

"[growls like a bear]"
— Upon receiving teddy bears from her aunt, A Flurry of Emotions 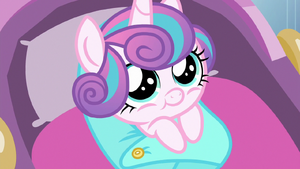