Flutter Brutter is the eleventh episode of season six of My Little Pony Friendship is Magic and the one hundred and twenty-eighth overall.

In this episode, Fluttershy tries to convince her freeloading brother Zephyr Breeze to move out of their parents' house, causing him to move in with her instead.

In production order, this is season six episode twelve.[1][2][3]

When asked on Twitter about Fluttershy's parents in late March 2015, Jim Miller replied, "If we had an awesome story for them, I wouldn't say it was out of the question."[4]

This episode was to be included in the Shout! Factory DVD My Little Pony Friendship Is Magic: Friends And Family but was replaced with The Gift of the Maud Pie.[5]

The episode's premise was conceived on March 11, 2015. The script's first and second drafts were respectively written on April 7 and 23, and polished on May 1 and 14. The final script was polished and approved on May 19 and locked on May 22.[6]

IMDb credited David Godfrey as the voice of Mr. Shy in season six episode twelve,[7] months prior to the episode's scheduled premiere.

On April 27, 2016, Jim Miller was asked "Ouch, are we aiming at Bronies with the Flutter Brutter episode? Or just 4chan?" and replied "Neither. We don't follow that as much as you all seem to think."[8]

The episode begins at Fluttershy's parents' house in Cloudsdale, where they have invited their daughter and Rainbow Dash for lunch. Mr. Shy is eager to focus on his cloud-collecting now that he has retired. As the conversation steers toward Fluttershy's eccentric and often unsuccessful brother Zephyr Breeze, Fluttershy's parents subtly hint to her that Zephyr is moving back in with them, much to Fluttershy's exasperation.

At that moment, Zephyr Breeze enters, excitedly greeting his older sister, briefly flirting with Rainbow Dash, and remarking on the failure of his latest business venture in mane therapy. Almost immediately, his presence is a burden on his parents as he moves his belongings in.

Fluttershy pulls her parents aside and comments that allowing Zephyr Breeze to move back in with them is a bad idea, considering his history of being a freeloader. Mr. and Mrs. Shy state that they just want to be as supportive as they can while their son finds his place in the world. When asked why he suddenly gave up on pursuing mane therapy, Zephyr Breeze only says it wasn't "the right fit" for him.

Upon returning to Ponyville, Fluttershy confides in Pinkie Pie and Applejack how frustrated she is over the situation with Zephyr Breeze. Applejack suggests that, if Fluttershy's parents won't stand up for themselves, Fluttershy should stand up on their behalf.

Fluttershy takes Applejack's advice and returns to her parents' home in Cloudsdale, where Zephyr Breeze is practically uprooting their living conditions to make room for his own. Despite Mr. and Mrs. Shy's reluctant acceptance of their son's ways, Fluttershy firmly tells him that he needs to move out and learn to stand on his own. Zephyr's confidence wavers, and he looks to his parents for support, but they side with Fluttershy. Realizing that he isn't wanted around, Zephyr Breeze tearfully collects his things and leaves.

Back at her cottage, Fluttershy starts to reconsider her stance, but Rainbow Dash assures her that it was for the best—until Zephyr Breeze appears on Fluttershy's doorstep and decides to move in with her instead.

Zephyr gets a job

Though Fluttershy grows increasingly frustrated with her freeloading brother, she allows him to stay with her—on the condition that he get a job, to which Zephyr Breeze nervously agrees.

Early the next morning, Fluttershy takes Zephyr Breeze to Carousel Boutique, where she has arranged a position for him as Rarity's employee. Rarity tasks him with color-dyeing fabrics while she and Fluttershy step out to buy more supplies. When they return, they find that Zephyr has "outsourced" the task to Opalescence and other animals, making a mess of the boutique.

Then, Fluttershy brings Zephyr to the Castle of Friendship, where Princess Twilight Sparkle tasks him with cleaning the throne room windows while Spike supervises him. However, when Fluttershy and Twilight check up on him later, he has somehow duped Spike into doing all the work.

Lastly, Fluttershy brings Zephyr to Rainbow Dash, who gives him a simple job at the Wonderbolts' headquarters—with the threat of zapping him with lightning if he fails. He returns to Fluttershy's cottage later with a zapped mane, Rainbow having made good on her promise. With this string of failures behind him, Zephyr Breeze gives up. With her brother incapable of doing something without quitting, Fluttershy tells him to leave.

"Fine! I'll just go live in the woods like my foreponies before me! Guess the only breeze this zephyr can count on is his own!"
— Zephyr Breeze

Can I Do It On My Own

As Fluttershy and Rainbow clean up the mess that Zephyr has left in the cottage, Rainbow assures Fluttershy that she did the right thing in kicking him out. However, one of Fluttershy's bird friends arrives to inform her of an emergency.

In the Everfree Forest, Zephyr Breeze has a difficult time living by himself; watching nearby, Fluttershy and Rainbow take pity on him. When they approach, he tries to convince them that he's doing well, but he eventually wallows in his continuous failures. Fluttershy tells Zephyr that he could do anything with his talents and intelligence if he simply tried. Zephyr admits that he's so afraid of failing, it's easier to not try at all, especially given his own sister's success as a hero of Equestria.

"Sometimes you have to do things, even though you might fail."
— Fluttershy

Fluttershy allows Zephyr Breeze to come back with her as long as he does exactly what she says, and Zephyr agrees, eager to not have to live in the forest. Back at the cottage, Fluttershy and Rainbow encourage Zephyr—through song—to continue pursuing mane therapy. With their support, Zephyr finally succeeds in styling a mane, and he thanks Fluttershy for believing in him.

Some time later, Fluttershy and Rainbow Dash have dinner with Fluttershy's parents. Mr. and Mrs. Shy express how pleased they are with Zephyr Breeze's recent drive and determination. At that moment, Zephyr bursts in, wearing a graduation gown and having just graduated from mane therapy school. His family tells him how proud they are, and Zephyr once again thanks Fluttershy for her advice and support.

However, even though Zephyr feels as confident as ever, he has difficulty finding his own place, and he asks his parents if he can still stay with them for a few days.

Zephyr Breeze: Guess who's home! That's right, big sis, it's your one and only favorite little brother, moi.
Fluttershy: [groans]

Fluttershy: I'm sorry, but I am just so... so... peeved right now! [gasps] Excuse my language!

Zephyr Breeze: I can do plenty on my own.
Fluttershy: I agree. Which is why you should move out.

Zephyr Breeze: Since you talk to animals all the time, I just figured it runs in the family, so why not outsource this stuff, you know?
[animals chittering]
Zephyr Breeze: Turns out the animal communication thing isn't genetic.

Rainbow Dash: I am gonna give you a job so simple and straightforward, not even you can weasel your way out of it! [quickly] And the second you try, I'm gonna zap you with a storm cloud! Got it?!
Zephyr Breeze: Oh, I got it. I can already feel the electricity between us.

Fluttershy: Zephyr, you're smart and talented. You could do anything if you just tried!
Zephyr Breeze: And what if I give everything I have and still fail? Honestly, I think it's better not to try at all.
Rainbow Dash: But then you won't ever do anything.
Zephyr Breeze: I don't expect you two to understand. I mean, when have you ever failed? You've literally helped save Equestria, like, a dozen times.
Fluttershy: And I was worried that I'd fail every time! Sometimes you have to do things, even though you might fail.

Zephyr Breeze: Thanks for believing in me, sis.
Fluttershy: That's what big sisters are for. 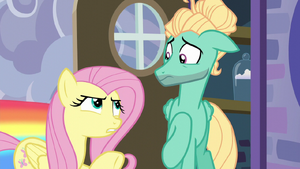