Start a Wiki
Fluttershy's Cottage is a small, woodland cottage located just outside Ponyville and the home of Fluttershy, Angel, and various animals. It lies just on the edge of the Everfree Forest. It is called "Fluttershy's Cottage" in the series and some merchandise, and Fluttershy's Cabin in Gameloft's mobile game.

The cottage first appears in Dragonshy and is featured in several episodes thereafter. Outside the cottage, there are a multitude of animal burrows, birdhouses, and Angel's house (which only appears in Dragonshy). Inside, the first floor holds the den and fireplace, even more birdhouses, and several mouse holes. Fluttershy's bedroom (first seen in Stare Master) and bathroom (first seen in A Bird in the Hoof) are on the second floor. Behind the cottage, Fluttershy has a chicken coop and brunch table.

In Swarm of the Century, Fluttershy welcomes a parasprite into her home, but it soon becomes an uncontrollable swarm. In Stare Master, Fluttershy foal-sits the Cutie Mark Crusaders, letting them sleep in her bed on the second floor while she sleeps on the den couch. In A Bird in the Hoof, Fluttershy's cottage is shown to be not far from the Ponyville clock tower. She looks after Princess Celestia's pet phoenix Philomena.

In Luna Eclipsed, Fluttershy stays inside her cottage on Nightmare Night, fearfully exclaiming that she has no candy and that visitors are not welcome. In May the Best Pet Win!, Fluttershy helps Rainbow Dash find a perfect pet, showing her various animals that live in and around her cottage. In Putting Your Hoof Down, Fluttershy has a mailbox and a gardener who tends to over-water her petunias. When Iron Will's assertiveness lessons alienate Fluttershy from her friends, she shuts herself inside the cottage and boards up the front door and windows.

In Keep Calm and Flutter On, Fluttershy welcomes Discord into her home as part of his reformation. He uses his chaotic magic to pull the cottage from its foundation and spin it around. Later in the episode, he changes the house's interior for Fluttershy's dinner party. In Magical Mystery Cure, as a result of Twilight Sparkle casting Star Swirl the Bearded's incomplete spell, Fluttershy's destiny is changed, and the cottage instead belongs to Rainbow Dash.

In Filli Vanilli, the area around Fluttershy's cottage also has a bear cave and a beautiful flower garden. The inside of the cottage is also shown to have a second-floor balcony. In It Ain't Easy Being Breezies, Fluttershy looks after a group of Breezies in her home.

In Castle Sweet Castle, Fluttershy and Twilight are outside of the cottage bathing the animals. It is also seen during the song Make This Castle A Home. The cottage also appears in Tanks for the Memories, Make New Friends but Keep Discord, Do Princesses Dream of Magic Sheep?, Scare Master, and The Hooffields and McColts.

In Flutter Brutter, Fluttershy's brother moves into her cottage after she convinces him to move out of their parents' house.

The cottage appears in Fluttershy Leans In and Discordant Harmony.

The cottage is seen in Yakity-Sax. Fluttershy puts some baby animals to bed, only for them to be woken up by Pinkie Pie playing the yovidaphone while passing by.

The interior of the cottage is briefly seen in My Little Pony: Rainbow Roadtrip, as Fluttershy prepares for the titular roadtrip.

In Gameloft's mobile game, the cottage is called "Fluttershy's Cabin" ("Fluttershy's House" in concept sketches). In the IDW comics' My Little Pony Micro-Series Issue #4, the inside of the cottage is shown to have a lower-level room, accessible via stairs leading down from behind a hinged bookshelf.

A playset of Fluttershy's Cottage was released in the "Explore Equestria" line of My Little Pony toys featuring a brushable Fluttershy.

In Enterplay's trading cards, series 1 card #84 of 84 is of Fluttershy's Cottage. The back of the card reads "Fluttershy's home resembles a cross between a treehouse and an animal sanctuary. Her cottage lies on the outskirts of Ponyville, near the edge of the Everfree Forest. From the outside it looks somewhat like a tree with windows and a thatched-grass roof added on. She has filled the trees that surround the cottage with birdhouses for her many feathered friends. Inside she keeps a tidy home for herself and Angel Bunny, as well as equipment for nursing sick woodland animals back to health." 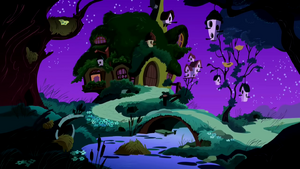 Retrieved from "https://mlp.fandom.com/wiki/Fluttershy%27s_Cottage?oldid=2100915"
Community content is available under CC-BY-SA unless otherwise noted.