Fluttershy Leans In is the fifth episode of season seven of My Little Pony Friendship is Magic and the one hundred and forty-eighth overall.

In this episode, Fluttershy tries to stand up for her ideas in order to realize her dream of building an animal sanctuary.

Fluttershy's animal sanctuary was mentioned in the April 11, 2017 preview[1] of the August 10, 2017 My Little Pony Annual 2018 published by Orchard Books in the United Kingdom.[2] The events of the episode are also directly referenced in the IDW comics' My Little Pony: Friendship is Magic Issue #54.[3]

This episode premiered on Canada's Treehouse TV channel on April 30, 2017, six days ahead of its scheduled premiere on Discovery Family.[4]

According to writer Gillian M. Berrow, Lola the sloth is named after the real Lola the Sloth from the Wildlife Learning Center, who appeared as a surprise guest during Kristen Bell's guest spot on The Ellen DeGeneres Show.[5][6]

A visit to Dr. Fauna

The episode opens at Fluttershy's cottage where Angel practices for an upcoming Ponyville pet parkour competition. While running an obstacle course built out of books and household items, Angel trips and injures his leg. Fluttershy, fresh out of bunny leg braces, takes him to the clinic of veterinarian Dr. Fauna.

Unfortunately, Dr. Fauna's clinic is packed with injured or sick animals, and the doctor is overwhelmed because most of the animals refuse to leave even after they have recovered. Fluttershy feels guilty about this due to her recommending Dr. Fauna to all of her animal friends and comes up with a solution to satisfy both the doctor and her many patients.

Fluttershy gathers the rest of the Mane Six to her cottage to explain the situation, and the ponies eagerly agree to help. With their assistance, Fluttershy sees this as an opportunity to realize a lifelong dream of hers: building an animal sanctuary that caters to critters of all species and sizes. Fluttershy's friends are so inspired by her confidence and passion for her dream project that they enlist the help of a few expert ponies to make it a reality:

Some time later, Wrangler, Hard Hat, and Dandy Grandeur assemble at Fluttershy's cottage to discuss her sanctuary project. When she shares with them her vision of what she wants the sanctuary to look like, however, they appear uncertain. Nonetheless, they agree to help Fluttershy on behalf of her friends who recommended them to her.

First, Fluttershy takes Hard Hat to an open field and explains the layout of her sanctuary. Hard Hat, picturing the sanctuary to look more like a hospital building, suggests clearing away some trees to make room, but Fluttershy insists on incorporating the trees into the sanctuary. Next, Dandy Grandeur suggests lavish designs for the sanctuary's curtains, but Fluttershy says there's no need, insisting on a natural color scheme of greens and browns.

Lastly, Wrangler offers a variety of cages to keep the animals in, but Fluttershy is firmly against the use of cages in her sanctuary. Later, when Fluttershy checks on the expert ponies' progress, she discovers that they have gone against her wishes and started building the animal sanctuary according to their own respective expertise. As a result, the front door is too small for larger animals to fit through, Dandy's curtains block out the sunlight, and Wrangler's cages are too confining.

Because the expert ponies did not do as she asked, Fluttershy dismisses them from the project. When Dr. Fauna brings the animals by to see the sanctuary, Fluttershy's fears are confirmed when the animals disagree with the inhospitable amenities, and the incomplete building comes crashing down.

"This didn't go at all like I had imagined..."
— Fluttershy

That evening, Fluttershy and Dr. Fauna find themselves in the same situation as when they started: with an overcrowded animal clinic. Dr. Fauna thanks Fluttershy for trying her best, but Fluttershy refuses to give up on her dream. The next day, she assembles her friends at her cottage again and decides to take charge of the sanctuary project herself. To help her realize her dream, Fluttershy has enlisted the help of someone she knows she can trust to abide by her wishes: Big Daddy McColt of the McColt family.

With Fluttershy and Big Daddy McColt overseeing the project, the ponies and their friends succeed in building the animal sanctuary in accordance with Fluttershy's intended vision. Fluttershy shows Dr. Fauna to the completed sanctuary, dubbed the Sweet Feather Sanctuary, and it is met by the doctor and animals' unanimous approval.

"Sometimes, all we need to do is believe in our dreams. And when we finally reach our goal, we'll know that it was worth what it took to get there. Because the view will be even better than you imagined!"
— Fluttershy

Fluttershy: My dream is to build a real animal sanctuary. A beautiful habitat where every animal – whether sick or scared or even just lonely, feathered or furry, scaly or slimy – every critter would be welcome. My sanctuary can be the one place in Equestria they call home 'til they feel ready to take on the world.

Hard Hat: [to Steam Roller and Jack Hammer] I know she thinks she knows what's best, but once she sees how much better it works with these plans, she'll thank us.

Rarity: When a client has a vision... [chuckles]
Dandy Grandeur: ...Sometimes they need me to steer them away from it. Especially if it's dirt brown.

Hard Hat: We used the trees just like you asked!
Dandy Grandeur: And that curtain fabric is organic! It's got natural fibers!
Wrangler: And I added pillows inside my cages. That should count as feelin' like a hug!
Fluttershy: I may not know much about construction or interior design or wrangling, but I am an expert at one thing: the care of animals! And what animals need is a sanctuary, not this!

Fluttershy: I won't give up! These animals need me! And I'm gonna solve this once and for all!

Rainbow Dash: How about putting an awesome flying course for the birds right there?
Pinkie Pie: And a carrot cake stand here?
Twilight Sparkle: Ooh, a library cave?
Fluttershy: Everypony, stop! I appreciate you sharing your thoughts, but I need everypony to respect mine. Other ponies may be experts in their fields, but animals are my field of expertise. And if I say this is what I want, then this is what needs to happen!

Fluttershy: Welcome to Sweet Feather Sanctuary, a safe and cozy retreat for everycreature! 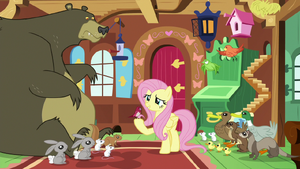 Retrieved from "https://mlp.fandom.com/wiki/Fluttershy_Leans_In?oldid=2193155"
Community content is available under CC-BY-SA unless otherwise noted.